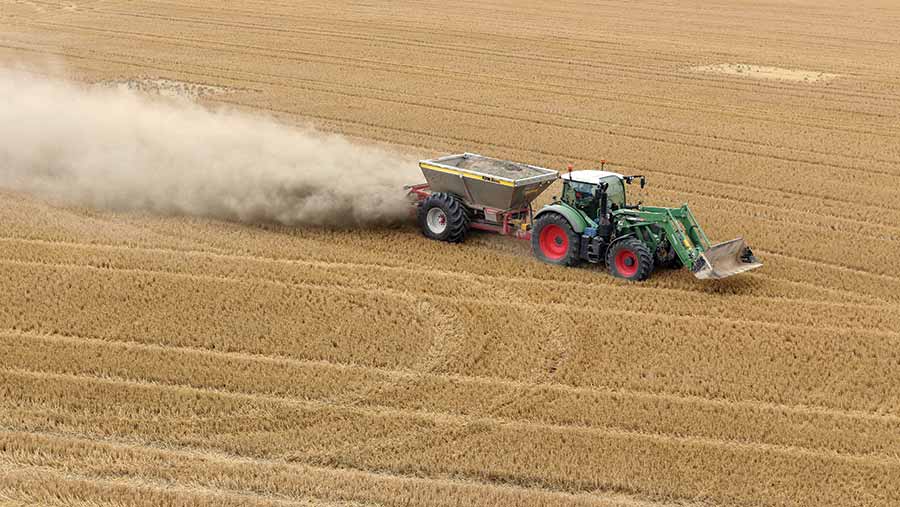 Getting the balance of good structure, biology and the 14 essential mineral elements that plants require within the inherent limits of a soil type is critical to maximising crop yield.

In the first two parts of our “Making sense of soils” series, we looked at cracking compaction for good soil structure and the value of building soil organic matter.

And addressing these elements will build a healthy soil, which is fundamental to balanced crop nutrition according to the James Hutton Institute’s Philip White.

He explains that the physical and chemical properties of the soil will affect which nutrients, and how much of each nutrient, will be available to the plant.

“In addition, crop nutrition can be assisted by beneficial organisms, such as bacteria, fungi and earthworms, which influence soil structure and release nutrients into the soil solution to support plant growth,” says Prof White.

He describes the soil as an “inside-out stomach” of the plant that digests the food into the available nutrients for healthy plants, maximum growth and ultimately produce high yields.

“Organic matter is important and is a buzzword at the moment. However, organic matter needs to be broken down by soil biota into humus, or black carbon.

“The more you have, the more nutrients the soil can hold on to for the plant to take up,” explains Mr Hepburn.

Mr Hepburn explains that clay and humus particles have a number of negatively charged sites that hold on to the positively charged cations, which include calcium, magnesium, potassium, sodium, hydrogen, ammonium and iron.

These cations are prevented from leaching, but are still available to the crops’ roots, which produce exudates that act as a lubricant and catalyst for growth, a food source for microbes and provide the positively charged hydrogen ions that drive the cation-exchange process.

“In this process, both the microbes and the plants take up nutrients such as calcium, magnesium and potassium held on exchange sites.

“It is estimated the majority of a plant’s mineral nutrition is absorbed this way,” says Mr Hepburn.

He adds that the CEC of a soil is extremely difficult to influence, with soil texture – most notably the clay mineral content – the main driver of a soil’s inherent fertility.

Sandy land, such as that found in the Brecklands of Norfolk, would have a low CEC, while that of an organic fen peat would be very high. The higher the CEC, the more hydrogen the soil can hold to drive the exchange process.

“You can improve lower CEC soils slightly by increasing organic matter, but generally, you have what you have and it is important to know the limits of your soil and adapt it management accordingly.”

Where one particular element is dominating the exchange sites, nutrient imbalances, nutrient lock-up and subsequent plant deficiencies can occur.

An example of this would be a high-calcium soil, which can cause phosphate and trace element lock-up, despite there being abundant reserves of these nutrients in the soil profile.

This is the part of the process that can be influenced and Mr Hepburn says the two most important major nutrients in the soil are calcium and magnesium.

“The ratio between these two elements is crucial due to their effect on soil structure, with calcium helping to open up the soil and magnesium the opposite.

“High calcium results in a too loose soil and high-magnesium soil is generally too tight and sticky – the kind you walk across and just keep getting taller and taller,” he explains.

The pH defines the acidity or alkalinity of a substance and soils need to be kept at a range between 6 (slightly acid) and 7 (neutral). This is because the availability of most nutrients is optimum within this range and is also favoured by soil bacteria and fungi. Calcium sources such as lime can be used to correct acidity.

Getting this ratio right, he says, will improve soil biology, improve P availability and subsequently rooting – allowing plants to scavenge for other nutrients such as the key yield driver, nitrogen.

The nitrogen-use efficiency of fertiliser applied to the soil is about 50-55%, which is relatively inefficient, but balanced soils with the correct calcium-magnesium ratio, biology and structure can dramatically improve this.

“Often, we try not to balance micronutrients ourselves, as these tend to come into line when you get the Ca:Mg ratio right.

“Low calcium can be corrected with lime or basic slag and a high-magnesium problem with gypsum (calcium sulphate),” he adds. “We are aiming for an available Ca:Mg of 10:1.”

Anions are negatively charged ions including chloride, nitrate, sulphate and phosphate and aren’t stored on clay or humus, but released to plants from the decay of organic matter, air and water.

These elements should be applied in the most available form to the plant, with various sources of nitrogen, phosphate, potash and sulphur available.

“Muck is also a great source as you are not only getting the nutrients, but also organic matter and beneficial biology too,” adds Mr Hepburn.

Situated near St Lawrence on Essex’s Dengie Peninsula, half of Simon Cowell’s land was reclaimed from the salt marshes of the Blackwater estuary nearly two centuries ago.

With no natural topsoil, the heavy clay was difficult to work into a seed-bed and Mr Cowell tells Farmers Weekly he had to do something about it.

“It was either too wet or too dry and not much in between,” he explains.

He consulted a soil specialist, who carried out an Albrecht test, which measures the cations in the soil and it revealed that on top of the hard-to-work high clay content, his soils were low in calcium and high in magnesium.

This resulted in soil acidity and subsequent manganese deficiency, but also the lock-up of magnesium – a key ingredient in chlorophyll, essential for plant photosynthesis.
Mr Cowell was advised to apply gypsum to lower magnesium levels and “open up” the soil. Combined with increasing soil biology, it released locked-up nutrients, neutralised acidity and dramatically improved the state of his land.

He has also adopted a no-till establishment system, makes his own compost – which is added to the land – and chops all crop residues to improve structure and organic matter.

“It has made a huge difference. It used to be hard or wet and anaerobic. Now it stays in a constant aerobic state to allow the soil biology to do its work,” he says.

Mr Cowell hasn’t used any P or K fertiliser for about 15 years and carries out soil sampling along with plant tissue tests in the spring to keep track of what is going on. He doesn’t get deficiencies any more.

“There are huge amounts of P and K locked up in some soils and when you apply more and more, that gets locked up too. You can release it and we have proven it can be done,” he says.

The farm still uses normal amounts of nitrogen on its wheat, but the rotation has been adapted to include more legumes and spring break crops, which has resulted in slashing the N fertiliser bill in half in the same 15-year period.

Mr Cowell is also using foliar nutrition to supply nitrogen to his wheat crops in the spring, with the often-dry soils of east Essex hindering the supply of nitrogen through the soil.

“Getting N through the leaf is more efficient, but the drawback is that you can only get small a amount on at a time or you risk crop scorch,” he adds.