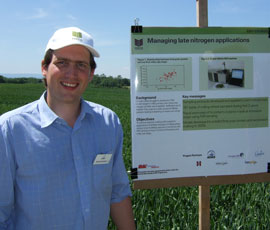 Trials looking at the accuracy of variable-rate nitrogen sensors showed that the tools could effectively locate areas of differing nitrogen requirements, he told visitors to the recent ADAS Boxworth open day. “Variation in Soil Nitrogen Supply is detectable using canopy sensors and it strongly confirms the principles behind the N-Sensor approach.”

However, more work was needed as current systems did not take the three key components of nitrogen requirement, crop demand, soil nitrogen supply and uptake efficiency, into consideration.

The 5ha plot was split into a series of small squares and the exact nitrogen requirement was calculated in each. The field was expected to have a fairly uniform nitrogen supply, but the variation was considerable, said Mr Kindred. “We didn’t expect to see much difference between the plots, but we saw large differences in the amount of nitrogen getting into crops.”

Across the plots there was a 110 to 220kg/ha variation in optimum nitrogen dose, he said.

ADAS was also trialling a combine-mounted protein sensor from American firm Zeltex, said Dr Kindred. “We’ve been looking at how accurate it is and at the moment it looks sensible.”

The sensor was also being used to see how close the canopy sensing technology was getting to the optimum nitrogen dose. “Protein should be a good indicator if there is too much or too little.”