Soya could be an ideal spring break crop for growers in southern England to give good returns, control blackgrass and help meet an almost insatiable demand. 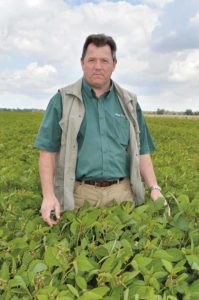 With soya trading at £375/t (non-genetically modified), average farm yields of 2.5t/ha and low inputs, the crop has attracted more than 30 growers in south and eastern England this year.

David McNaughton, managing director of seeds group Soya UK, is offering buy-back contracts for all the crop growers can supply to try to replace some of the UK’s 3m tonne annual importation of soya.

“With this size of a market, we could fill East Anglia and the south of England with soya,” he tells Farmers Weekly.

He argues that the crop is attractive to growers as there are now better varieties from eastern Europe than those available 15 years ago, and prices are rising in a world that is short of protein crops.

The crop area could rise to 2,000ha next spring as soya becomes a strong rival to peas and beans. As soya is a late-sown spring crop, it will also be ideal to control blackgrass, say Mr McNaughton.

A massive market to meet

Soya beans typically contain less oil than oilseed rape at about 20% and small feed compounders tend to use whole beans rather than extract the oil.

World soya production is about 200m tonnes annually with about 125m tonnes traded on the world market. As the Chinese buy 80m tonnes and the European Union 30m tonnes each year, the market is pretty tight with little excess supply.

UK soya prices are currently about £375/t which includes a £40/t premium for non-GM beans.

The crop could play a major role in controlling blackgrass because it is sown in late spring and so gives extra time early in the year to spray off the troublesome grassweed with glyphosate herbicide.

“Many in East Anglia see sugar beet as the best spring crop to control blackgrass, but I would say soya is better,” he says.

One of the 30-plus growers trying soya this year is Cambridgeshire fenland grower Stephen Edgley, who is growing soya for the first time after he gave up on oilseed rape after a yield of 3.1t/ha this summer.

He is growing 12ha of soya this year and looking for a 2.5t/ha yield with low inputs – just seed and some sprays. He hopes it will help with his blackgrass problems.

“We are stopping growing rapeseed because every year each oilseed rape field gets worse from blackgrass and the yield declines,” he says.

Mr Edgely farms 900ha of heavy fertile silt land in Cambridgeshire and is growing the soya at his Ransonmoor Farm at Donnington, just south of the town of March on the fenlands.

Brothers Jason and Haydn Edwards are also growing soya for the first time in a 10ha block on the edge of the Cambridgeshire Fens.

They were attracted by the market potential for the crop and its ability to control blackgrass on their 100ha farm in the village of Upwood, six miles north of Huntingdon.

“Obviously, there is a big potential market and we like the idea of growing something that could cut down on imports into the UK,” says Jason Edwards.

Mr McNaughton says the upturn in interest in soya comes after neonicotinoid seed dressing were banned for use on oilseed rape and linseed, the price of wheat and rapeseed fell and also due to the soya’s potential role in controlling blackgrass.

His group is supplying varieties from eastern Europe such as Elena and Siverka from the Ukraine and Pripyat from Belarus, which do well in UK conditions when drilled in late April/early May.

“We find the best adopted ones are coming from the Ukraine, with Siverka looking one of the best,” Mr McNaughton says. 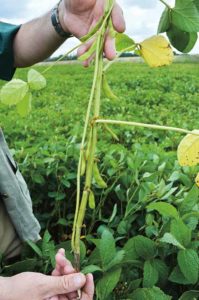 There are a range of pre-emergence herbicides to use on the crop, including pendimethalin, while there is an effective post-emergence product, thiofensulfuron-methyl (Pinnacle). No fungicides or insecticides have been used on UK crops.

In six out of 10 years diquat will be needed as a desiccant, while in other years the crop can be directly combined, he says.

Heavy-land growers could see poor emergence if the seed-bed is baked hard in dry weather after drilling, while pigeons can be a problem in the first three weeks of growth until two true leaves appear.

Where to grow soya