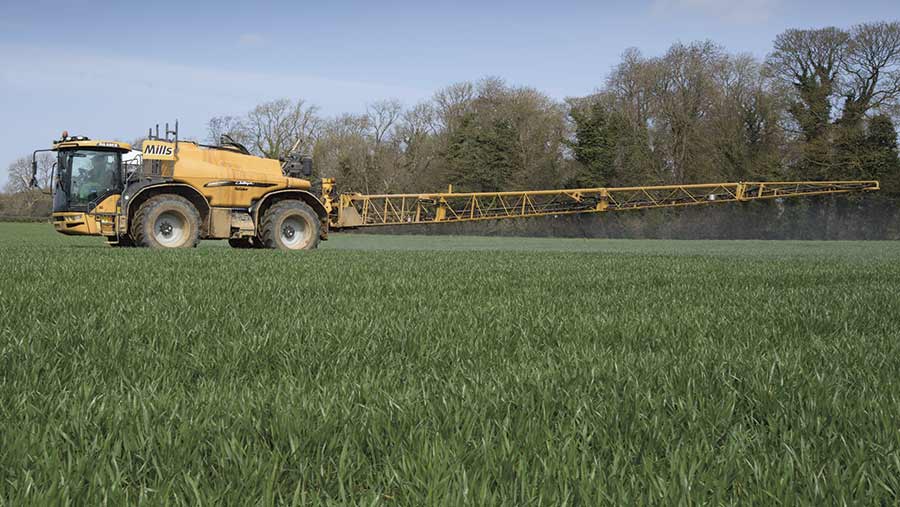 A T1.5 fungicide spray can prove valuable in managing wheat diseases when spraying intervals become stretched, although they should be the exception, rather than the norm, says one expert.

“Certainly, you have seasons where you may have to use a T1.5, but they can be predicted and tend to be when the crop races ahead unchecked early in the year,” explains Bill Clark, technical director of Niab Tag.

“Once it has gotten away, it then becomes too advanced as you approach the main disease-control timings,” he says.

In this situation, the T1 spray goes on early, just as leaf three is coming out, potentially leaving a four-week gap until the T2 spray.

“That’s when alarm bells start to ring,” he adds. “A four-week gap between T1 and T2 is too long, as it means the tip of leaf two can become infected. So that’s where you might be committed to a T1.5.”

Against this background, there are concerns about shifts in fungicide performance and the ability of pathogens to evolve.

“There is no doubt that the continuing loss of eradicant activity amongst the azoles has put a greater focus on tight spray intervals, especially as their performance is only likely to get worse against any disease that has established itself in the crop,” acknowledges Mr Clark.

“We also have at least one new yellow rust race, so there is every reason for growers to be vigilant and aware of what is happening in their fields, so they can react accordingly.”

However, those circumstances don’t mean a T1.5 spray should be used as a matter of course, he cautions.

“Much will depend on your attitude to risk. If your T1 timing is correct, you shouldn’t need one. But it is important not to be too late or too early with the T1.”

Sprayer capacity and farm size will also have a bearing on spraying decisions, he points out.

“Not everyone can get round all of their wheat with the sprayer in a couple of days. There is limited time for checking crops and then applying the extra spray, just as there is to be spot-on with all your timings.”

For some growers, applying a multisite protectant such as chlorothalonil at T1.5 does give some flexibility if the following flag leaf spray gets delayed, he accepts.

“But it is very likely the use of chlorothalonil will be restricted in the future, with a limit put on the total amount that can be used. So growers will have to decide where they are going to get the most benefit from it in the spray programme.”

Jonathan Blake, senior research scientist at Adas, says a T1.5 spray has crept into some programmes, but believes it is mainly where yellow rust has been causing problems.

“The new races can cycle quickly, with symptoms appearing  seven to 14 days after infection, so waiting for four weeks isn’t sensible,” he points out.

“There are occasions where a T1.5 has been needed to prevent a yellow rust epidemic, which is where a rust-active azole has a place with chlorothalonil.”

Regarding septoria, providing the T1 has gone on when leaf three has emerged, there will be some protection on emerging leaf two, he advises.

“Then, in most seasons, the curative activity provided by the T2 spray should suffice.”

Get the basics right

Independent agronomist Sean Sparling points out that a T1.5 spray shouldn’t be needed where the basics have been put in place correctly.

“We still have the fungicide tools we need for good disease control, even though the diseases are mutating and becoming more aggressive. There’s no need to use five or six fungicides in a season or to add to the selection pressure they are under.”

Providing growers don’t go charging in too soon at T0, or use low doses, they will find that the traditional timings work well, he adds.

“Three weeks’ activity is as good as it gets from some fungicides, so time your T0 accurately and concentrate on keeping leaves one, two and three spotless. Keeping in front of disease is important.”

The T0 and T1 sprays are essential building blocks, he stresses. “But the T1.5 spray is just a triumph of marketing over common sense. Remember that you can’t spend your way out of trouble.” 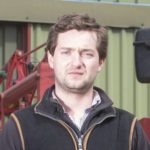 A T1.5 spray has never been used at Driver Farms in Suffolk and is unlikely to feature in 2017, although grower Adam Driver would have no qualms about spraying at that stage if he felt it was required.

He makes his treatment decisions by assessing the conditions and considering the risk.

“It’s all about the variety being grown and the winter we have had, as well as whether we will see a return from using more fungicide.”

In a very wet season, it might pay, he accepts. “But if it’s dry, there’s no point.”

A further consideration is that Mr Driver is growing more resistant wheat varieties, such as Costello and Siskin, which are cleaner and less responsive to fungicides. He is also drilling them later.

“That’s been a deliberate move,” he says. “We are doing everything we can to be less reliant on solutions from a can.”

He accepts that spray intervals have to be maintained, especially in a high-disease-pressure season, but points out that he hasn’t had any problems caused by delayed or missed spray timings in recent years.

“We don’t want to be applying any more fungicide than we have to. Safeguarding the chemistry that we have at our disposal is very important.”

He adds that product choice for a T1.5 spray is difficult. “Given the threat to most of the main fungicide groups from resistance and regulation, it is difficult to justify an extra treatment. We would rather not have to use one.” 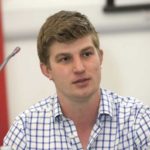 A T1.5 spray is a routine operation in most seasons on wheat grown at Hyde Hall, near Dereham, Norfolk.

For grower Ed Salmon, there are several reasons why he opts for an additional treatment at this stage – with variety choice being high on the list.

“We are growing ‘dirty’ feed wheat varieties – Santiago and Reflection – both of which respond well to fungicides and produce very high yields, providing we stay one step ahead of the disease threat,” he explains.

As such, he is very wary of extending the spray interval beyond three weeks, especially given the recent decline in fungicide performance and the inability to rescue a disease situation when it gets out of hand.

New rust races are another concern, as variety resistance ratings can no longer be relied on as the first line of defence.

“Of course, there is also a seasonal effect to consider,” he points out.

“If it’s very dry in April and the crops are clean, we would hold off. But that hasn’t always been the case.”

Winter wheat yields have been rising steadily at Hyde Hall, with further increases being targeted. “For that reason, cutting back on inputs is not our approach. Fixed costs are where we intend to make savings and bring in efficiencies.”

Product choice at T1.5 depends on the disease threat.

“It’s usually a very simple protectant treatment, based on chlorothalonil. Then a strobilurin for rust or a triazole for septoria might be added, according to need.”