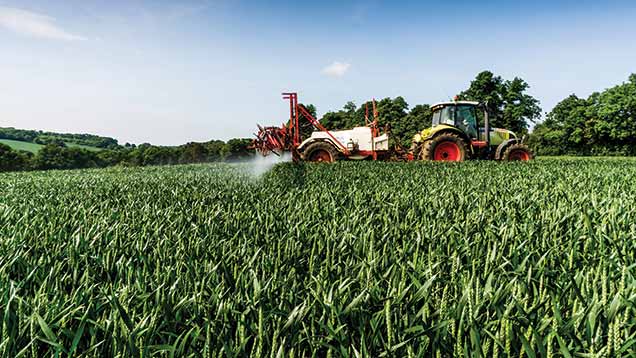 T3 fungicides are typically applied using flat fan nozzles angled 90deg to the crop, but angling nozzles may give better coverage of the ear.

“We wanted to test whether you get better coverage by angling the nozzles and if there are any benefits on disease control,” says Phil Jennings of Fera.

“Ears are pointing upwards and you need get as much coverage on them for good control.”

This was put to the test last year in inoculation trials with the T3 applied with nozzles either at 90deg or 30-40deg facing forward.

“We also looked at timing [90deg only], comparing growth stage 63 with the older recommendation of GS59 to confirm that current advice gave the best results.”

Crops were then inoculated with both F graminearum and F culmorum at GS65 (9 June) and assessed for signs of disease at GS75.

“The first thing to note is that there were very high levels of disease in the untreated plots, with disease affecting an average of 40% of ear area. This is way above what you will see in the field. We were testing treatments under very harsh conditions,” he says.

“This confirmed that mid flowering is the optimum time for T3 fungicides,” says Dr Jennings.

But he warns that there is a short window for the T3 spray and missing it by a few days can lead to a marked drop in efficacy.

“However, if you are a little late, you do still get some kick-back activity.”

Angling nozzles resulted in better control. “Looking at disease severity, there was a consistent response across all products [PJ3].”

Angling nozzles also reduced incidence, with Prosaro seeing a 24% reduction in the number of infected ears, 29% for prothioconazole and 13% for tebconazole. However, there was no improvement in either severity or incidence for epoxiconazole + metconazole.

“It seems not to matter which way the nozzles are facing, but more the fact they are angled. I believe it is offering better coverage of the ear.”

In conclusion, his advice for this season is to apply T3s at GS63 and to use angled nozzles. “Also stick with robust rates of active, especially if it is wet at flowering.”

Early indications suggest there is potential for 2015 to be a significant fusarium ear blight year if conditions remain favourable.

Last season, 70% of crops had fusarium symptoms, says Phil Jennings. “This suggests there was high inoculum pressure due to favourable spring conditions.”

But when it came to harvest, Fusarium culmorum and graminearum levels were low, suggesting weather at flowering was not favourable for infection.

So while the pressure from last year (inoculum carryover) is not particularly high, the winter was fairly favourable and not overly cold. “This suits microdochium and to some extent, fusarium too.

“And now we have seen warm spring conditions. Being relatively dry and mild is good for both microdochium and fusarium.”

Therefore, he believes there is potential for inoculum to build up in crops in the coming weeks.

“This now depends on conditions in May. Fusarium graminearum produces perithecia (fruiting bodies) in crop debris and they need moisture in May to mature and produce spores. The longer-term forecast is wetter, therefore, more conducive to produce spores.”