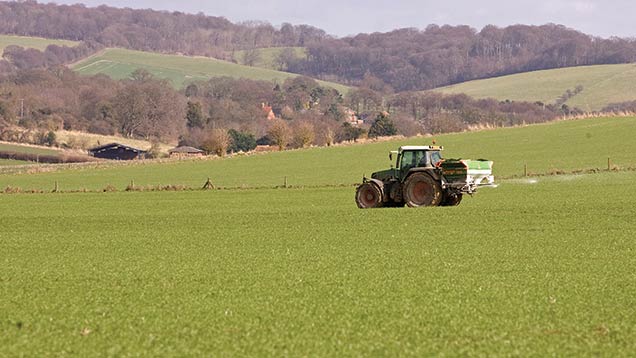 Shifting a higher proportion of a winter barley crop’s nitrogen requirement to an early application timing could provide growers with a significant yield increase.

Barley breeding has taken some significant steps forward in recent years, with both two- and six-row varieties now offering yield potential in excess of 12t/ha in trials.

With these potential yields, winter barley can compete with second wheats for a place in the rotation and can be grown at lower cost, but on-farm average yields in the UK are currently down at a lowly 6.5t/ha.

Like winter wheat, there has been a plateau in on-farm yields and this is likely down to a combination of factors, including static nitrogen rates – both in quantity and timing.

Pete Berry, head of crop physiology at Adas, says current fertiliser recommendations in the Defra fertiliser manual RB209 are one area that should be reviewed to push on-farm yields of the UK’s number-two crop.

RB209 advises that 25-30% of nitrogen should be applied before early stem extension (GS30), but current best practice in the field is widely accepted to be 30-40%.

However, an HGCA-funded research project led by Adas’ Sarah Kendall that reviews 25 nitrogen timing experiments suggests that proportion should be 50% and can achieve a 0.5t/ha yield increase over a 30% split.

“There is a strong relationship between increased light interception from crop emergence to flowering and increased grains/sq m, which is the driver for yield in barley.

“Unlike wheat, losing green leaf area five weeks after ear emergence won’t have a negative effect on yield, so later N to maintain that isn’t so important,” says Dr Berry.

The earlier nitrogen will also help with tiller production and survival. In early N trials it was also observed that plants produced longer ears, leading to increased grain sites.

However, Dr Berry cautions growers to ensure they don’t apply too early, which could increase the risk of leaching and losing a proportion of valuable and expensive nutrient.

“Apply the 50% split just before, or as the crop starts to move after winter and before it reaches stem extension [GS30],” he says.

In addition to the timing of nitrogen applications being able to unlock barley yield potential; there is also scope to increase the overall optimum nitrogen rate within nitrate-vulnerable zone (NVZ) rules. It is known that crops with the highest yield potential require more nitrogen than RB209 recommends.

Current NVZ maximum nitrogen limit (Nmax) guidelines state that where high yield potential can be proved on a particular site, you can apply an extra 20kg N/ha for each additional tonne of yield expected over 7t/ha.

Dr Berry and Dr Kendall’s recent research has shown this should be about 27kg N/ha, and with the highest-yielding varieties that could equate to about 50-60kg N/ha in some cases.

“It is obvious that the higher the yield potential, the more nitrogen you’ll need. Old varieties such as Maris Otter certainly won’t need it, but it could be justified on the top-yielding modern varieties on the Recommended List on high-yielding sites,” he explains.

“The aim of our work is to provide evidence for updating RB209, so hopefully evidence from the project will be compelling enough to justify change.”

Pushing yield won’t come without its complications and growers will have to be mindful of the increased lodging risk and also effects on grain nitrogen content if growing for a malting market.

While feed barley growers will be able to concentrate on yield, grain N is critical for barley destined for brewing or distilling purposes, with desired specifications ranging from 1.5% to more than 2% in some specialist malts.

Dr Berry advises growers to know their market and take into account nitrogen supply, nitrogen timing and yield potential to avoid any grain rejections later on.

“It is very difficult to get right, especially yield potential, but applying nitrogen at an earlier timing will reduce N by about 0.1%, and increasing N rate by 20-30kg N/ha will increase grain N by about 0.1%, so these factor will need to be taken into account when considering your total N requirement.”

In Yorkshire trials using two-row feed variety Saffron, the crop on the left followed RB209 guidelines by applying a total of 240kg N/ha, with 40kg applied in late March and 200kg applied during early stem extension in late April. The crop on the right received 120kg of N before the start of stem extension at the beginning of March and 120kg N was then applied at GS30 at the start of April. The early treatment yielded 8.74 t/ha and the late treatment 8.52 t/ha.

The earlier nitrogen increases straw yield by 0.3-1t/ha and height by up to 10cm, increasing the lodging risk, so plant growth regulation will be crucial to prevent crops from lodging.

About 76% of winter barley crops receive a plant growth regulator (PGR), with more than half of that figure getting chlormequat, despite the active having little shortening effect in the crop.

Dr Berry says that despite the lack of shortening effect, chlormequat still has a role to play.

“In some years it can enhance tillering and boost yield slightly in the absence of lodging and you wouldn’t want to miss the chance of gaining those advantages.

“But if lodging risk is medium or high, an alternative product must be used alongside chlormequat to give a better shortening effect in the crop,” he explains.

Predicting risk is important when considering a PGR strategy and three key factors should be considered, including the variety’s lodging resistance score, green area index (GAI) just before stem extension and yield potential.

“The size of the canopy is very important as you don’t need a big increase in GAI to significantly increase lodging risk over and above a GAI of 1,” explains Dr Berry.

A split application of a PGR that inhibits gibberellic acid, such as Moddus, Optimus or Canopy during early stem extension, followed by an ethephon-containing product such as Cerone or Terpal at GS37, is an effective programme for reducing lodging risk.