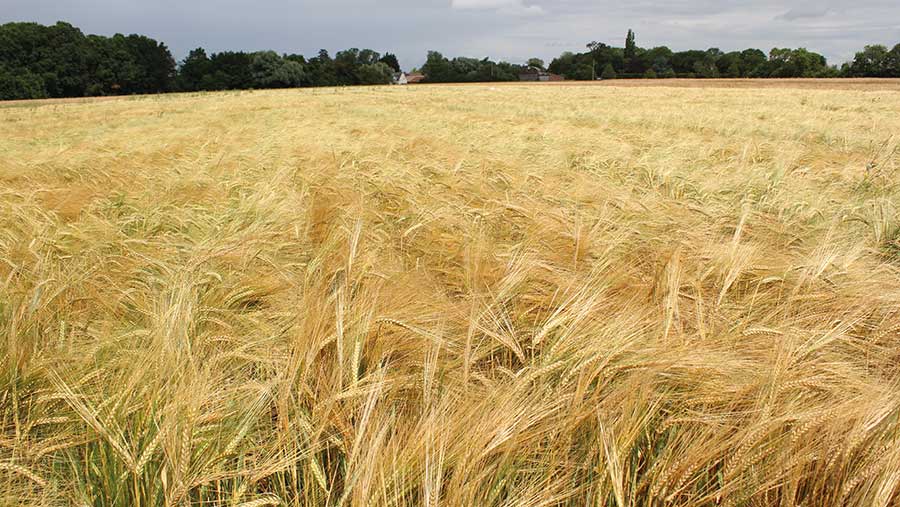 Bedfordshire grower Freya Morgan is set to switch 100% to the new spring malting barley variety Skyway as it outperforms industry favourite Laureate on her farm for yield and ease of combining.

She grew 190ha of spring barley in 2021 split 50-50 between Skyway and Laureate, but harvest results showed that while both gave impressively low grain nitrogen contents for malting at 1.6%, the former was well ahead in terms of specific weight grain quality.

“We are looking to grow all Skyway across 190ha this year due to its higher yield, better quality and ease of combining,” she tells Farmers Weekly.

Farming about 1,000 ha of predominantly autumn-drilled crops on heavy land with her son Josh, the spring barley needs to fit into a busy harvest schedule and be easy to cut at a time when there is more than 400ha of winter wheat to combine at the same time.

They have found Laureate difficult to combine on their land as brackling is a big issue with the variety – this is when barley ears droop over and can fall to the ground.

This has forced them to cut Laureate with a low combine bed to make sure they scoop up as many ears as possible, but this can push damp straw through the combine.

Mrs Morgan does not like to combine grain above 18% moisture, and combine operator Josh says he often has to stop combining Laureate early, while Skyway can be harvested into the evening.

“Brackling is a big issue with Laureate, while Skyway stands up well and we do not have to cut it so close to the ground. With Skyway, we can leave it a little longer when we are busy harvesting winter wheat,” she says.

Skyway joined the AHDB Recommended List a year ago at the end of 2020 as a potential brewing variety to compete with Planet, but with better yield and quality.

It still awaits full approval by the maltsters for brewing, with a decision expected in May 2022.

So for 2022, spring barley growers will have to chose the variety as a feed barley with the potential that it may get approval by the maltsters after the crop has been drilled. 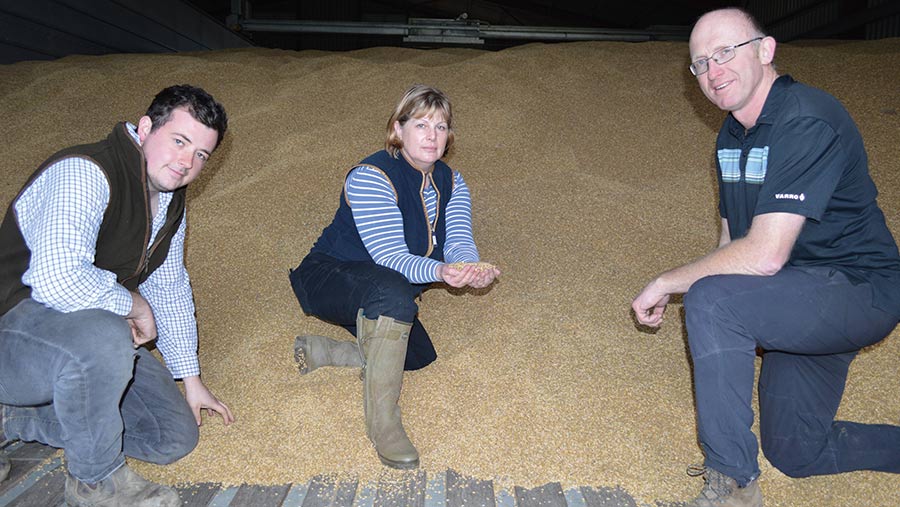 The 2021 Skyway crop was grown on a commercial buyback from grain trader Viterra, formerly Glencore.

The Skyway crop yielded 6.67t/ha in 2021, down on the farm’s medium-term average of 7.0-7.5t/ha, but in a difficult growing season with a very dry April followed by a wet May, the Laureate yielded only about 6t/ha.

After harvest, Mrs Morgan says the Skyway looked more like a wheat grain, showing a good plump specific weight of 63-64kg/hl compared with Laureate at only about 60kg/hl.

The spring barley has been important on the farm to control blackgrass, to provide a good rotation, while spreading cashflow and workloads. As a seed grower, Mrs Morgan has always been receptive to new varieties, while focusing on keeping down the cost of production.

Her agronomist, Mark Dewes from advisory group Agrii, is also looking at resilient varieties that can perform well with lower levels of inputs.

Last season, the farm spent only £28/ha on one fungicide spray, illustrating that spring barley can be a relatively cheap crop to grow.

“Spring crops have had a really challenging few years with long dry spells of spring weather, so we are looking at varieties that can perform in good and poor conditions,” he says.

The farm’s spring barley growing programme starts in the autumn with a pass of a deep disc-tine non-inversion cultivator, which leaves a well-worked and level surface ready for drilling in the spring, while incurring only minor soil disturbance to prevent blackgrass seed chitting.

Spring drilling is conducted with the farm’s 6m Kuhn Megant tined machine, with the aim of getting the seed in the ground in the first two weeks of March using a variable seed rate, with an average rate of 375 seeds/sq m, and getting the crop growing as quickly as possible. 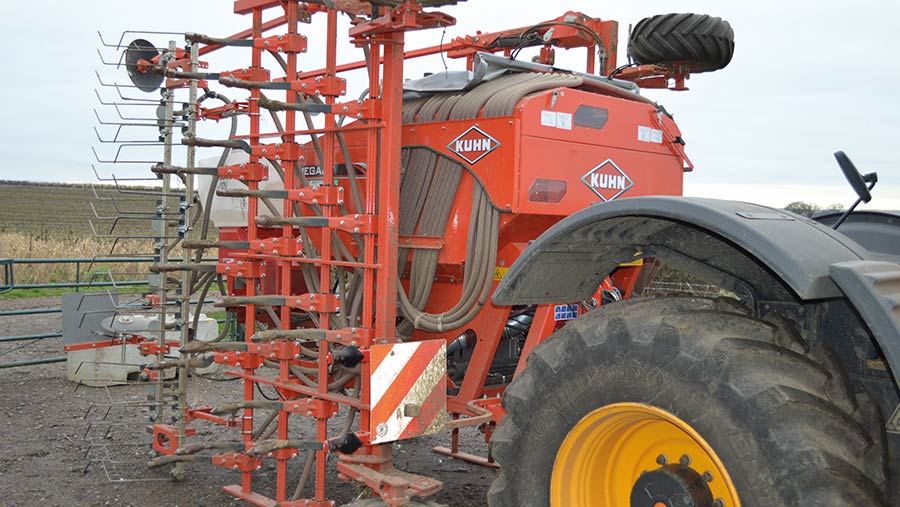 Nitrogen fertiliser use is relatively modest at 120kg/ha of solid ammonium nitrate used in a 50-50 split, in the seed-bed and at the two- to three-leaf stage, although if it is a very dry spring, rates have come below 100kg/ha due to worries over the lack of nitrogen uptake.

There is relatively little scope to cut nitrogen rates despite soaring nitrogen prices, as a modest nitrogen rate is needed to give a reasonable yield and still give a grain nitrogen content below 1.85%.

Although the variety has not gained full approval from the maltsters, Mrs Morgan says she will still grow Skyway due to its high yield and quality even if it does not make malting grade.

Costs from fertilisers and sprays were about £220/ha with two-thirds coming from nitrogen, phosphate and potash, with the rest made up of one fungicide, one plant growth regulator, and two herbicides aimed at broad-leaved weeds and wild oats.

The fungicide application was a three-way mix of the SDHI bixafen, azole prothioconazole and strobilurin azoxystrobin applied at the end of May, costing £28/ha, in a relatively low disease year.

Skyway could be the next big brewing-only spring malting barley variety as it shows better yield and grain quality in terms of specific weight and low screening compared with the current dominant brewing spring barley, Planet.

The variety is bred by Nordic Seeds and distributed in the UK by Agrii, and the group’s seed technical manager, John Miles, says the variety stands out in terms of yield and quality.

The variety was included in the AHDB Recommended List in late 2020 as it showed a big advance in yield above other malting varieties, but it still awaits a full decision for brewing, expected in May this year.

There should be enough seed for planting in spring 2022 to account for 5-7% of the certified spring barley seed market.