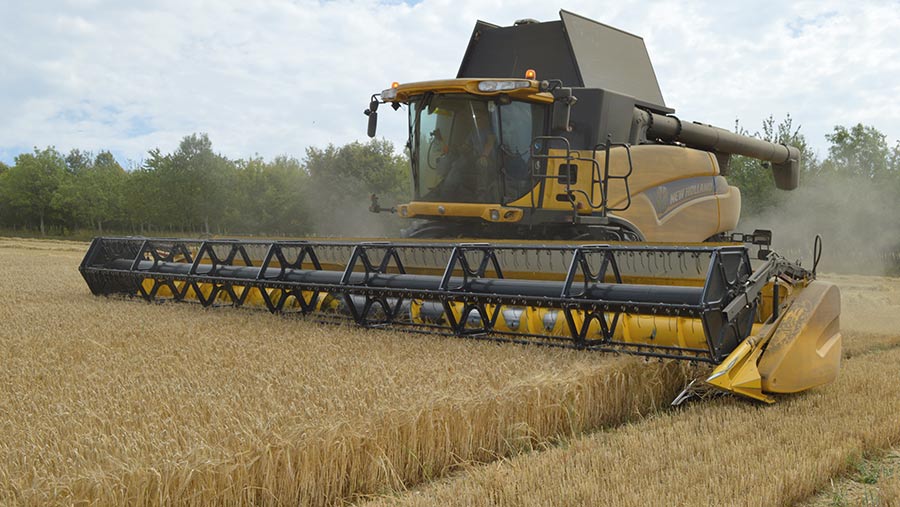 Jim Farquharson grew his highest-ever yield of spring barley in one of the most difficult years for spring crops, aided by a focus on crop nutrition and canopy management.

His 100ha of spring barley averaged 9.3t/ha last summer, with the top field reaching 10.5t/ha on his light chalky Dorset soils after a very wet winter followed by a severe spring drought.

A combination of variable fertiliser rates, micronutrients and bio-stimulants all helped to produce a bumper crop in a year when the farm’s normal average annual rainfall all fell in the autumn and winter.

“It’s the best barley crop we’ve ever grown on the farm in the most challenging year for spring crops,” he tells Farmers Weekly.

Yield mapping from the farm’s combine had shown the variability of yields across fields and prompted Mr Farquharson to look at more accurate fertiliser placement to give more even yields.

The farm had used variable-rate phosphate and potash fertiliser applications for more than a decade, but after the farm soils were scanned and tested in 2018, Mr Farquharson moved to variable rates of nitrogen.

His aim was to produce “hedge-to-hedge” uniform fields of spring barley and push up the farm’s medium-term yield average of 7.5t/ha using the malting variety Laureate. 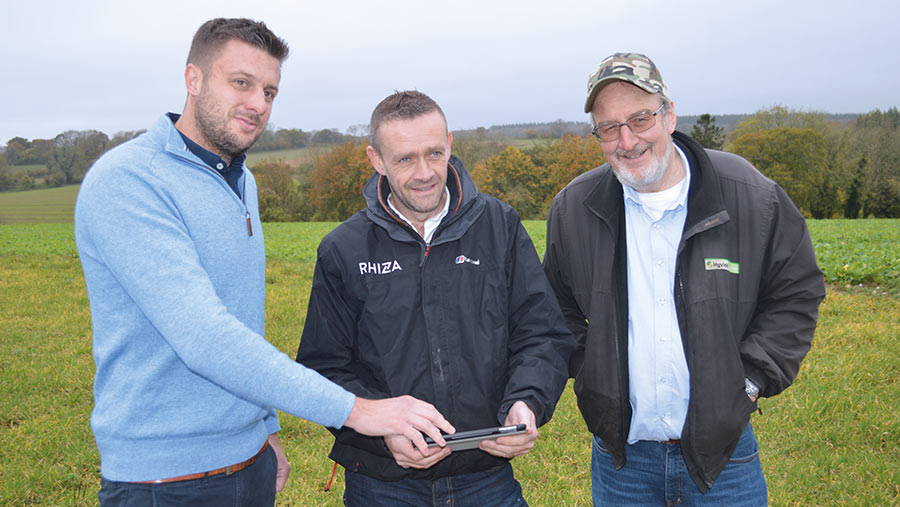 However, as there was a massive spring barley area in prospects for 2020 and malting premiums set to narrow dramatically, he and his agronomist Todd Jex decided to go for out-and-out yield rather than aiming for malting quality.

Mr Jex calculated that the farm should aim to produce an extra 0.75t/ha of grain to compensate for the loss of any malting premium and extra nitrogen fertiliser used, but the farm actually managed to increase yields by nearly 2t/ha.

“Over the past three years, yields have been pushed up using variable rates of fertilisers, but last year we looked to really increase yields focused on crop nutrition and canopy management,” says Mr Jex, who works for agronomy group Agrii.

Spring barley is a key crop for Mr Farquharson, who farms 400ha of arable land at Eastbury Estates, Tarrant Gunville, five miles north-east of Blandford Forum, with oilseed rape and spring bean break crops among cereal crops, so he was keen to try and push yields higher.

The focus was to get the crop off to the best possible start with only a shallow cultivation conducted to try and maintain soil moisture – on a farm that has not used a plough for 10 years – and then drilled at a relatively high seed rate.

“Spring barley has little time to compensate, so what you put in the ground has a big determination on what you get out at harvest,” says Mr Farquharson.

The previous wheat and barley land was stubble-raked after harvest in the autumn, glyphosate herbicide applied in the spring to control overwintered weeds and then there was a quick shallow pass with the vibrating tines of a Vaderstad Swift.

The aim is to drill between mid-February and mid-March, but the wet winter and late spring saw drilling delayed and it finally took place in the last week of March, with the top-yielding field sown on 24 March.

The crop was drilled with the farm’s 6m Horsch Sprinter tined drill at 350 seeds/sq m, with the aim of seeing 300-plus plants emerging and north of 600 ears/sq m at harvest, and then the ground rolled.

The combined seed and fertiliser drill placed slow-release protected urea nitrogen and protected phosphate at variable rates some 25mm below the barley seed. Nitrogen was applied at an average rate of 98kg/ha and the phosphate at 66kg/ha.

The remainder of the protected nitrogen urea – some 92kg/ha – was applied at the 1-2 leaf stage. Variable-rate potash and flat-rate sulphur were applied separately.

The variable-rate programme places more fertiliser in the poorer parts of the field and less fertiliser on the more fertile soils to try and even up the crop for harvest.

Mr Jex adds that making nitrogen and phosphate really available by placing them close to the barley seed is key to getting the crop off to a strong start in the spring.

The barley crop was then tissue tested about one week before three planned spray timings in the spring to add micronutrients along with other inputs as needed.

In the late spring, the drought was so severe that the budgeted yield of the spring barley was reduce to 6.5t/ha, while a possible T1.5 spray was not applied as the crop was too stressed. However, rain in June helped the crop recover.

The extra nitrogen fertiliser pushed the grain nitrogen barley content at harvest up to 1.85-1.90% above the normal malting range of 1.6-1.65%, but this was compensated by the high yield.

Canopy management is helped by using a high seed rate and then an amino acid-based bio-stimulant at the T1 stage, with the aim of looking for high ear numbers at harvest without causing excess disease and head loss.

“We would like 800 ears/sq m at harvest without seeing any brackling and head loss and not bringing in more disease,” says Mr Jex.

Barley yield comes largely from the number of ears/sq m, more than the size of the ears, and so tillers produced and tiller survival are key to big yields.

The bio-stimulant was tried in tramline trials on the farm and led to a yield increase of 0.4t/ha.

The whole farm was soil tested in 2018 by Rhiza, the digital/precision-farming arm of Agrii’s parent company Origin.

Chris Hoskins, business manager at Rhiza, says the next step would be towards variable rate seed rates and this is possible with the farm’s Horsch drill.

“Variable rates for drilling would be the next step towards achieving as even a crop as possible,” he adds.

A variable seed rate would likely be between 350-450 seeds/sq m and would not necessary increase the overall seed cost excessively.

Mr Farquharson is set to try variable seed rates this spring, with his new drill set up to achieve this option.

“The move to variable seed rates will hopefully lead to more even crops and a higher field yield,” he says.