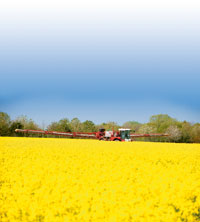 ADAS trials are attempting to confirm the benefits of nitrogen applied at flowering.

“We don’t know if the benefit in previous trials was because the N programme was sub-optimal,” ADAS’s Peter Berry said. “So we’re doing trials to test that by applying 0 to 320 kg/ha of nitrogen and then super-imposing another 40kg/ha of nitrogen at flowering.

“What we found last year was the average yield response was 0.25t/ha irrespective of the previous nitrogen rate, but we also got a reduction of 1% in oil content, which stacks up to quite a lot of money in lost oil bonus payments.

“When you also factor in the cost of application, and the possibility of crop damage when you run through late, it is too early to say what the net benefit is,” he said.

“My gut feel, though, is it could be worthwhile if you could tank mix it with a sclerotinia spray.”