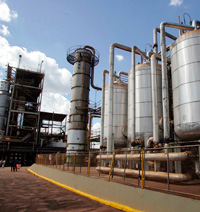 The Country Land and Business Association (CLA) has expressed its “deep disappointment” at the Renewable Energy Review carried out by the Committee on Climate Change, which has called for a cautious approach to using biofuels for transport (FWi, 13 May).

The organisation said the sustainability concerns highlighted in the report were groundless, and it failed to recognise the role that biogas could play in the transport sector.

He also called on the government to tackle the investment uncertainty posed for large-scale solar and anaerobic digestion that followed the emergency review of Feed-in Tariffs (FiTs) earlier in the spring.

Rural businesses faced losses of more than £1m due to the proposed solar tariff cuts, yet they “collectively hold the keys to the delivery of land-based renewables in both the solar and AD sectors”, he said.

“The CLA reluctantly accepts that budget constraints mean payments for large-scale solar must be cut to preserve the FiT budget. Reducing the loss to investors for future projects could be fixed by introducing pre-certification of projects over 50kW, or by putting projects up to 1MW into the under-spent Renewable Obligation budget to help maintain reasonable rates for smaller installations.”

“I would like to see a ‘manure bonus’ to help drive the most sustainable farm-based AD,” he added.