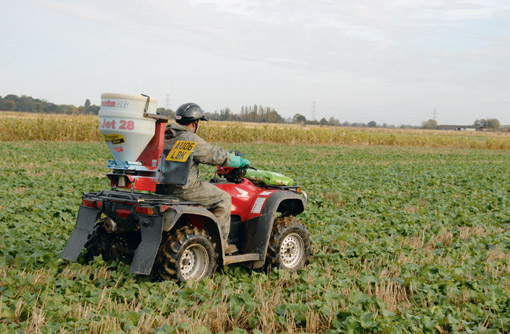 It’s going to be challenging. That’s how one researcher views the future of crop protection, adding the development of alternative approaches is not happening fast enough.

This urgency for innovation has been created by the loss of existing active ingredients, together with the need to maintain crop yields and quality, says Toby Bruce of Rothamsted Research. This is especially difficult given the limited amount of new chemistry in the pipeline.

“There are some developments in the agri-chemical world, but they’re few and far between,” he reports. “A good example are the diamides, which are insecticides based on a new mode of action and work by targeting the calcium channel of insects.

“At this stage, they look as though they will be effective on aphids, as well as caterpillar pests. And they are based on new chemistry.”

But new chemistry comes at a higher price, acknowledges Prof Bruce, who believes that it is still required for broadacre crops.

“Biological control agents are great in a contained environment, such as a glasshouse, but in the field the concept is trickier to get right. The predators tend to fly away or get predated themselves.”

While his work has largely been focussed on crop pests, he highlights that weed and disease control is also facing many of the same challenges. “There are resistance issues, economic constraints and environmental pressures with the current chemical armoury. Some crops are very vulnerable to attack.”

Just 10 biopesticide active substances have been approved in the UK since 2006, despite the presence of a National Action Plan.

Registration hurdles are blamed for the low number, which doesn’t compare very well with the USA, where 69% of all product registrations are biopesticides.

“What you have to realise is that biopesticides require registration as plant protection products in the EU,” explains Roma Gwynn of Biorationale. “And that means that they are mainly regulated using the same system as for traditional agrochemicals.”

In the EU, it’s a two-stage process which takes up to four years and costs over £0.5m. “You have to get the active substance registered before the product can be. So there’s a great deal of data required.”

But regulation is important, for the protection of users, consumers and quality standards, adds Dr Gwynn.

Looking ahead to future developments, he highlights the potential role of plant defence activators. “There has been work carried out with a compound called cis-jasmone, for example, which induces the plant’s own defence mechanism when it is applied to the crop.”

The compound is extracted from the oil of the jasmine flower and can be sprayed onto crops using existing equipment, he explains. “It doesn’t have the same efficacy as an agrochemical, but it has shown a consistent, significant reduction in aphid populations.”

It works by slowing pest development, allowing the natural enemies to keep pace, and by making the crop more attractive to the predators.

“Getting the natural enemies to move into the crop is one of the hurdles that growers have to climb. Products like this could help.”

Prof Bruce suggests conservation biological control – where the crop is made attractive to natural predators – will have a place. “On a practical level, it means providing nectar sources for the predators to feed on and avoiding blanket spraying.”

Another technique which is being evaluated in other parts of the world is companion cropping, so that root exudates from the companion species can be used to help suppress weeds, reveals Prof Bruce.

“Whatever developments are progressed, they must be workable at the field level and make economic sense. There’s no doubt that more will be delivered through the crop in the future and there will be new ways of using biological control. Resistant varieties will also feature strongly.”

“Whatever developments are progressed, they must be workable at the field level and make economic sense. There’s no doubt that more will be delivered through the crop in the future and there will be new ways of using biological control. Resistant varieties will also feature strongly.”
Professor Toby Bruce, Rothamsted Research

At the University of Hull, research work on parasitoid wasp species should help with some of the problems encountered when moving biological control out to the field, believes senior lecturer Darren Evans.

His team have identified that there are between 4,000-6,000 species of parasitoid wasps in the British countryside, most of which are generalists and will attack a whole range of insect pests.

“We’ve developed a molecular tool which can look for and identify DNA in the pest,” reports Dr Evans. “If parasitoid wasp DNA is confirmed within the pest when we take a swab, we can be confident that it will die.”

That, in turn, allows rates of natural parasitism to be determined, he continues. “Armed with this type of information, growers can make more informed decisions on insecticide use. And they can manipulate predator numbers by habitat management.” 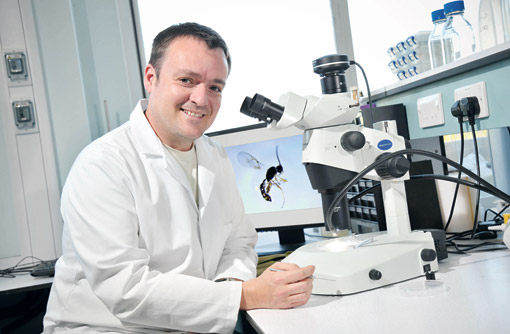 His aim is to release an industry tool which can be used to rapidly assess parasitism rates. “It’s not far away. We’ve got the technology already.”

The practicalities associated with biological control is something that specialist company Becker Underwood, now part of BASF, is familiar with. The largest producer of beneficial nematodes, the organisation has a commercial product called Nemaslug which could be of interest to the UK grower with metaldehyde under threat.

Nemaslug offers biological control of a wide range of slug species, by introducing nematodes in their infective juvenile stage to soils where slugs are present.

Once applied and watered in, the juveniles seek out slugs and infect them – causing the slug to stop feeding, move away from the crop and die about one week later. The nematodes then reproduce inside the slug and release a new generation of infective juveniles.

The big difference with a product such as Nemaslug is the active ingredient is a living organism, so it shouldn’t be exposed to excessive heat or cold and it does have a shelf-life. In order for the nematodes to be effective, soil temperatures must remain above 5C for two weeks after application.

From the synthetic to the natural

Biopesticides are mass produced, biologically based agents for the control of crop pests.

They can be living organisms, such as nematodes or micro-organisms, or naturally occurring substances, such as plant extracts or insect pheromones.

According to Wyn Grant of the University of Warwick, bio-pesticides are a sustainable alternative to synthetic plant products, but they have faced market and regulatory challenges.

“And one of those difficulties is their definition. Generally, they’re naturally occurring entities that have little or no toxicity, are invisible to the naked eye and can be applied with existing equipment.”

They can be combined with other solutions and are relatively cheap to develop. “They also need to be redeveloped less frequently than chemicals.”

But there are downsides, he admits. “They are less efficacious, due to their slower kill rates, short persistence and susceptibility to unfavourable conditions. And they often require better technical knowledge.”

So, are they a halfway house between conventional and organic production? It’s a sector that’s growing very fast, points out Prof Wyn, but one which is still very small compared with the agrichemical market.

“And it has been given a boost by the EU Sustainable Directive on Pesticides, which requires member states to develop National Action Plans showing their strategy for pesticide reduction and integrated pest management implementation,” he says.