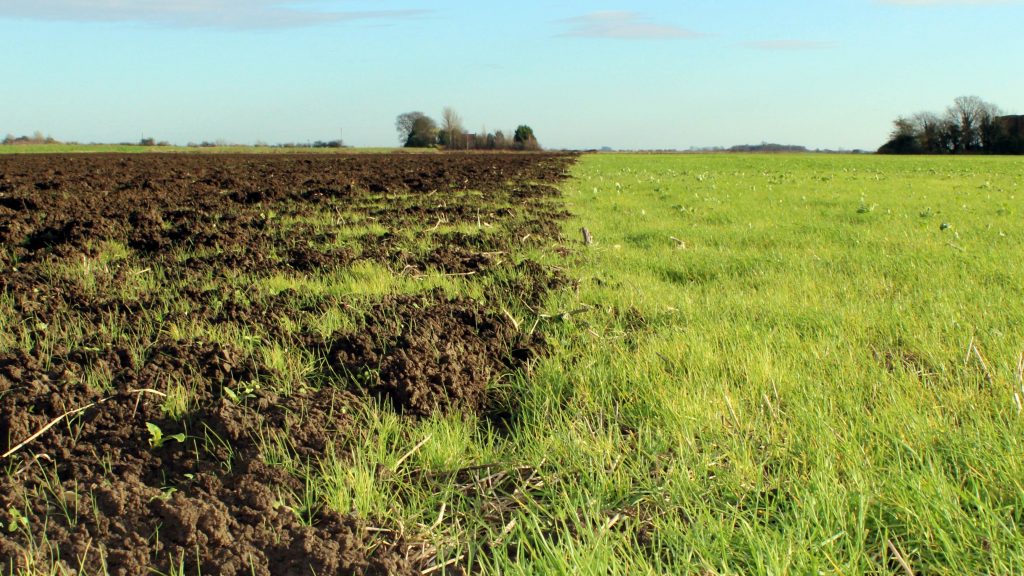 A trial set up on the blackgrass burdened land of one Fenland farm is comparing the weed control benefits of different cultivation and spring cropping combinations. Oli Hill takes a look.

Blackgrass has got the better of one heavy land farm on the Lincolnshire Fens, stifling wheat yields and forcing a major shake-up in farm practice.

Chris explains that a rapid blackgrass infestation on parts of the farm saw wheat yields reduced by around 50% last harvest.

“We had been relying on oilseed rape as a break crop to get different herbicide actives on to help with control, but it isn’t a true break crop when blackgrass is involved.

“We can throw everything at the field and it won’t make any difference because the crop is sown before most of the blackgrass has germinated. Good activity from later applied residuals is really hit and miss.

“This year we still got 10t/ha on wheat in fields that aren’t so bad with blackgrass, but in the worst fields there were significant areas which yielded 5t/ha and at one point the readout on the combine dipped to 1t/ha.”

With such a threat to crop production, Chris says the farm has reached a crossroads where the only option left is to take bold action to overcome the grassweed nemesis.

For the 2016 harvest, the area of spring barley grown will more than double – an action he deems a “complete necessity”.

“We’ve not had spring barley on this farm for about 12 years, but now a quarter of the farm is in spring crops.”

“The blackgrass is now so bad that we are targeting the worst fields and will drill spring barley to get the situation under control,” he says.

“There’s no point in growing wheat after wheat in these fields because we will be looking at yields of 6t/ha or less. If that is to be the case then we may as well grass it all over and get some cattle in.”

With herbicide chemistry unable to offer sufficient relief Chris is turning to cultural control methods, teaming spring cropping with stale seed-beds and the most suitable cultivation techniques on his land type.

To find out which cultivation method is best for blackgrass control on heavy land, a field trial has been setup on his farm.

Chris’ son, and Farmacy agronomist Alex Richardson, is conducting the trial on a 12ha field where the blackgrass seed population is estimated to be about 1,000 seeds/sq m, with confirmed triple-R herbicide resistance.

“This trial looks to compare the ways in which different cultivations affect blackgrass control on heavy land. The field has been divided into strips of land that has been ploughed, shallow cultivated with tines or discs and then rolled once, twice or three times.”

Chris also insisted that part of the field was dedicated to the current farm practice of shallow discs and sub-soiler legs to see how this would stack up.

“We want to find out exactly what effect moisture and cultivation differences can have on blackgrass germination.

“Already we have seen that while ploughing can be a good option for control, it is better suited to lighter soil types than what we have here.

“On this heavy, blocky land we get seed distribution throughout the soil profile when it is ploughed, rather than the desired full-inversion to bury the seed entirely to a depth that makes it unviable.”

He adds that although it is generally accepted blackgrass seed must be buried for three to four years to make it unviable, this timescale cannot always be fully relied upon because moisture levels and the plough depth can have an influence. 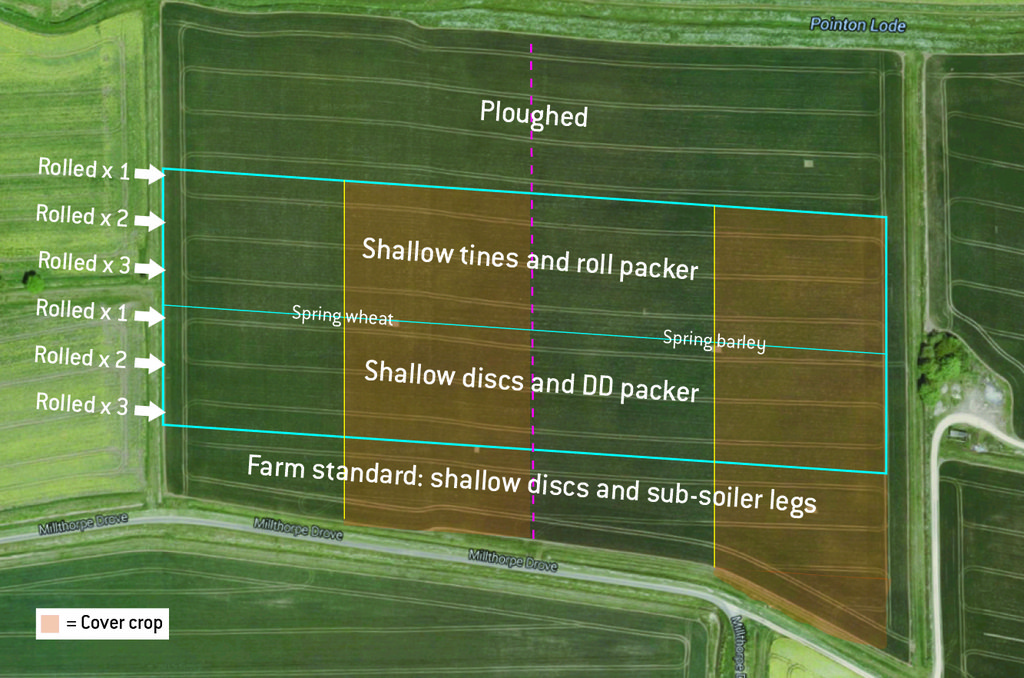 On shallow cultivated sections of the trial site a comparison of rolling frequency has already given some interesting results.

A quality seed-bed with good consolidation will help maximise blackgrass germination and will allow growers to reduce the seed bank population more effectively.

“When rolling twice compared to just once, we’ve seen 50-60% extra germination,” Alex notes. “We worked out that it costs £2.50/ha each time you roll so it isn’t much of an extra cost to go over twice to get a really well consolidated seed-bed.

“However, we have found that rolling three times doesn’t give any better results than rolling twice, so a third pass with the roller is a waste of time and money.”

He acknowledges that the trial is still in its early days and a better indication of how well the various cultivations have helped control the grassweed infestation will emerge once spring crops are in the ground.

Spring cropping has the potential to give up to 88% control of blackgrass according to research and spring barley is often the first choice for growers.

“We have seen that spring barley is the best for control because it’s so competitive, but we want to see how spring wheat will perform too,” explains Alex.

Half the plot will be drilled with spring brewing barley variety Explorer, with the other half in as the Group 1 spring milling wheat Mulika.

“Mulika is a very vigourous variety and is high yielding with a chance of a premium if we can hit milling specification,” says Chris. “It will be a challenge to grow spring barley in this field, but we can’t viably grow wheat on it either.”

The trial also seeks to better understand how cover crops can improve soil conditions for spring crop drilling and establishment.

The need to get as many stale seed-beds as possible delayed cover crop drilling until late-September, which led to poor establishment of certain species.

“Meanwhile, both of the farm-saved seed options look fairly robust. We’ll see later on in the spring if there is any immediate soil conditioning effect and if cover cropping is a viable option on this heavy soil and blackgrass situation,” says Alex.

“We cannot leave soil like this to slump over winter and it is all about getting the soil into its optimum condition for drilling because seed-beds are so important for spring crops.”

On its third flush in early-December, a thick carpet of blackgrass covers the min-tilled areas of the trial field.

They will be sprayed off with glyphosate six weeks before spring crop drilling. The idea behind this is to retain the cover crop rooting network, help dry the soil out for better drilling conditions and allow the land to return to its biological equilibrium.

Chris says the trial is already making him think about the way crops are produced in the future and accepts that the farm finances are likely to take a knock.

“There is no alternative. We have to change farm practice now because this is as bad as it gets. Blackgrass is a long-term fight and we might have to accept that we will have to take a hit on yields. That may be the price to pay for controlling blackgrass.”