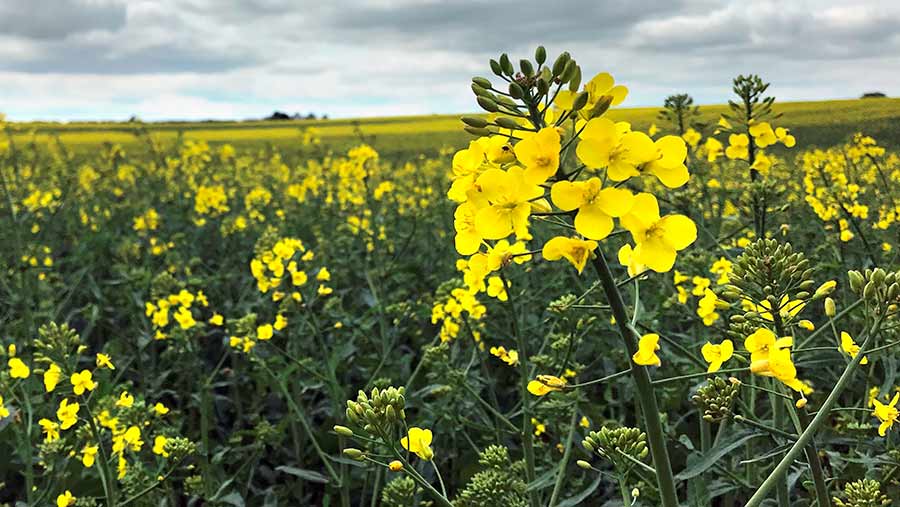 A serious charlock problem meant yields across Swinbrook Farms in the Cotswolds, Oxfordshire, had dropped to just 2.5t/ha from the 200ha of oilseed rape grown each season.

Clearfield hybrid rapeseed varieties, which are tolerant of  the herbicide active imazamox, were the only viable option for continuing with rapeseed on the two estates that make up Swinbrook Farms, but Mr Hogsbjerg was initially sceptical of the technology.

He was also wary of increasing the complexity of the spraying regime at the farm by growing both herbicide-resistant rapeseed and normal varieties with differing needs.

To minimise the complexity, all of the rapeseed cropping area at the 440ha Wilcote Estate, one of the two estates that make up Swinbrook Farms, was planted with a Clearfield variety three seasons ago.

The benefit of being able to hit broad-leafed brassica weeds such as charlock, runch and hedge-mustard became apparent in just one season.

Without the competition from the weeds, crops at Wilcote yielded 0.5t/ha more than at the 560ha Swinbrook Estate.

The following season the weed problem reached a critical point at this second estate, when half a field of rapeseed had to be mowed out to get on top of the charlock problem.

Last season was the first growing 100% Clearfield across the whole farm, and the results are encouraging – Swinbrook achieved 3.4t/ha, while Wilcote managed 3.6t/ha.

While last year’s crop has yet to be sold in a pool, Mr Hogsbjerg expects to achieve an average gross margin of £470/ha, based on a price of £320/t.

With Clearfield varieties delivering lower yields than those on the Recommended List, and being fairly expensive to grow, many farmers choose to limit their use to the fields with the biggest weed problem.

But the severity of the weed problem at Swinbrook means it is actually more profitable to grow 100% Clearfield varieties.

Mr Hogsbjerg admits these yields aren’t great, but are a huge improvement on the 2.5t/ha the farm was achieving five or six years ago when crops were failing due to charlock.

“Rape yields improve year-on-year. They are still not where they should be, but we have no charlock and crops are establishing.”

Without the competition, crops are better developed, as they are intercepting more light. This season he is expecting to yield about 4t/ha.

Along with the weeds, Clearfield herbicides are also clearing up rapeseed volunteers, which is in turn bringing down the erucic acid levels of the crop, which have been a problem in the past. 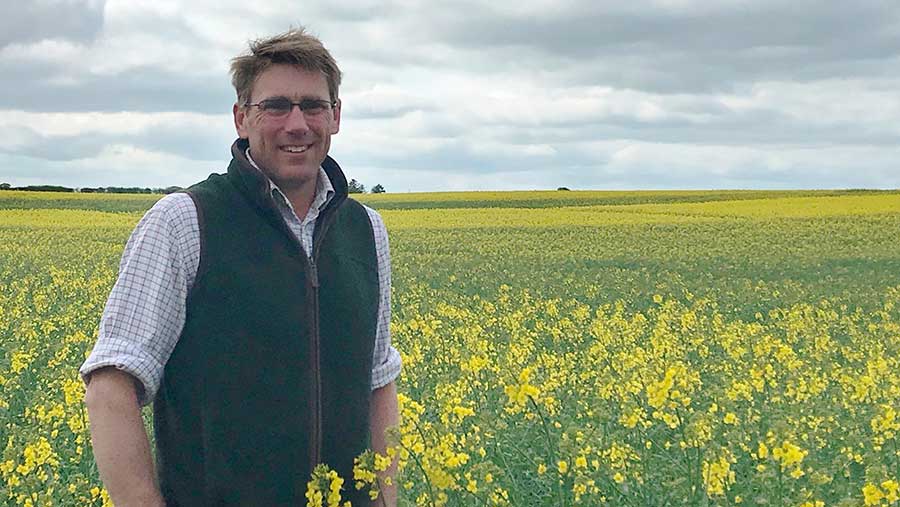 A close rotation of rapeseed of just one in two, or one in three, combined with mild winters lacking the necessary frosts to kill off weeds, allowed the charlock and runch situation to get out of control.

In the past Mr Hogsbjerg always grew DeKalb varieties, using bifenox under an extension of authorisation for minor use to hit the charlock.

But while chemical control works well with a good frost, the resilience of mature charlock means it needs two doses to kill it, and if the weather turned, the second dose was often missed.

This allowed the charlock to go to seed and means that in many of the fields, the charlock situation is such that Mr Hogsbjerg could not rely on frosts to clear up.

This season the oilseed rape drilling was completed by 28 August. It was min-tilled as shallow as possible into wheat stubble to also incorporate sewage sludge using a Horsch Sprinter fitted with 5in Dutch openers.

It was rolled once or twice depending on conditions, and a pre-emergence spray missed unless there was a major issue with weeds.

The crop then received a standard post-emergence of Vulcan or Centurion Max for grassweed control.

Mr Hogsbjerg uses two of the post-emergence Clearfield herbicides available – Cleranda and Cleravo – to tackle a range of broad-leaved weeds and grassweeds, and also take out rapeseed volunteers.

These tend not to need to be followed with Astrokerb unless there is a major issue with poppies.

This herbicide programme is achieving 95% control of weeds, he says, and a complete rotation round both estates should ultimately solve the weed problem.

Alongside moving to herbicide-resistant varieties, in the past three years the rotation has been broadened as the farm tries to find other crops that will be profitable.

At the Swinbrook Estate the rotation now consists of wheat, barley, rapeseed, wheat, and then spring wheat or beans. Wheat, rapeseed, wheat and spring beans are grown at Wilcote.

Although yields are increasing and weeds are being eradicated, the switch to Clearfield varieties has not been entirely plain sailing.

Last season Mr Hogsbjerg grew Clearfield Imperial at Wilcote and Veritas at Swinbrook. While Veritas was meant to have the highest potential of the two, the crop was disappointing, at it was slow to get growing in the spring.

This year he has switched to Impersario at Wilcote and Imperial at Swinbrook.

As a result of the disappointing crop, Mr Hogsbjerg is conducting a field-scale on-farm trial of Clearfield varieties in order to select the ones that will give the highest yields.

He is looking for vigour in autumn and spring and the earliest harvest, and says that while Clearfield varieties weren’t great in the past, they have been improved.

Of the six trials, Plurax has the earliest vigour and is the most likely variety to be sown next year.