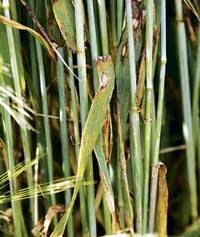 Wheat may have to wait another year for the introduction of new generation carboxamide fungicides, but for barley the first one has arrived.

Syngenta’s Bontima, a combination of isopyrazam and cyprodinil, was launched earlier this month.

Cyprodinil should be familiar to most growers as the active ingredient in Unix and Kayak. Isopyrazam is the new generation carboxamide fungicide, from the same family as boscalid, albeit from the new benz-pyrazole chemical group, according to Syngenta.

The firm claims the benz-pyrazole structure allows the fungicide to bind strongly both to the fungus making it highly potent against diseases, but also to leaf waxes to provide long-lasting protection.

“In this way, isopyrazam is able to provide a durable barrier in the leaf wax, controlling disease before it is able to penetrate the plant,” explains Rod Burke, Syngenta’s UK cereal fungicide manager.

The firm’s trials suggest the combination gives excellent protection against the full range of barley diseases, including net blotch, rusts, rhynchosporium and ramularia.

Independent trials as part of the HGCA’s barley fungicide performance research in the past two years confirm the product’s strength against brown rust in particular, where Bontima gave clearly stronger activity than the current barley standards of Proline, Fandango and Tracker in both eradicating and protecting against the disease.

According to the performance curves (see chart), a half dose of Bontima reduced established infections from over 10% to less than 1%, compared with over 2% for a full rate of Proline and just under 4% with full rate Fandango.

Protectant activity against net blotch is similar to Tracker, Fandango and Proline, but eradicant activity appears slightly weaker than Proline, in particular.

The product also fails to match the prothioconazole-based standards on either rhynchosporium protection or eradication.

“Bontima fits between Proline and Fandango and the rest on rhynchosporium,” says Simon Oxley, SAC‘s barley disease expert. “It doesn’t match Proline, but it does have better activity than Tracker and the strobilurins.”

Its profile means it could be used alone at T1 as long as it wasn’t a high pressure rhynchosporium situation, he suggests. “It already has a mixture partner in cyprodinil.”

In high rhyncho pressure then a tank mix with Proline would be advisable, he says.

The only problem with that particular tank mix might be cost, points out Mark Hemmant of Agrovista. “Bontima is going to be a bit more expensive than a prothioconazole plus strobilurin treatment.”

He sees the product having a more natural fit at T2 in barley with its strengths on rust and spotting. “In our trials we’ve seen clearer benefits at the T2 timing. On balance it has matched or out performed the standards at that timing, so we’re more inclined to recommend its use then.”

Typically, growers should add chlorothalonil to Bontima at that timing, particularly if ramularia is being targeted, Dr Oxley recommends. “Otherwise you are relying very heavily on isopyrazam for activity.”

Ramularia has already developed resistance to strobilurin fungicides, and using Bontima without chlorothalonil risks the same happening, he explains.

The latest application timing of Bontima has to be watched with T2 sprays, Mr Hemmant warns. “It is awns emerging. Fandango has a later cut-off, but the latest timing with anything with chlorothalonil in is also awns emerging, so where spotting is targeted you really need to spray by then.”

Bontima’s activity in TAG trials has been broadly comparable to other standards, and confirms that of other independent sources.

“It hasn’t been head and shoulders above the current standards,” Richard Overthrow of The Arable Group says. But he expects a difference to develop as the strobilurins and triazoles fall away as more resistance and insensitivity develops to those groups.

Rust and spotting have been its key strengths, while rhynchosporium he agrees is not quite as strong as some other standards. “That’s the one which would warrant some back up.”

The product’s price might be an issue for some barley growers this season, he adds. “With barley prices low, it has a significant cost over the others, which might make growers wary. We’re suggesting to our members that it is worth trying on a limited area, as it is new chemistry we will need to embrace, but with the significant price premium it might not be something you use everywhere.”

Mix with Proline for rhyncho

Both Syngenta’s isopyrazam and Bayer CropScience’s bixafen were expected to be approved in time for use this spring in wheat, particularly following favourable assessments from the UK’s Chemicals Regulation Directorate.

But approval has been held up by a change in European maximum residue level legislation. Prior to use being approved MRLs need to be set at an EU-wide level for foods that will be produced from crops treated with the pesticide.

MRLs are set at levels to reflect the highest residue of pesticide expected in any food when a pesticide is used correctly.

Prior to the new regulation coming into force in September 2008, MRLs were set by a combination of national levels and levels set under EC directives.

But the new directive means that levels were harmonised across Europe, and so now, member states have to submit an application for an MRL. This has to go to the European Food Safety Authority to produce a risk assessment, which is voted on by the Standing Committee on the Food Chain and Animal Health. The voted proposal is then scrutinised by both the European Parliament and Council before being finally ratified. The whole process can take up to a year to complete.

The UK submitted a request for an MRL for cereals for bixafen last July. The proposal is currently awaiting European Parliament and Council scrutiny following positive assessments at the previous stages. Once this is successfully negotiated, an amending Regulation will set the MRL and allow the proposed UK approval to be granted. CRD expects this to happen in late May or early June, perhaps allowing a small test market for this season.

Isopyrazam, meanwhile, has been approved on barley because its use does not give rise to measurable residues, meaning the default MRL of 0.01 mg/kg – the limit of detection – could be set. But in wheat an application for a MRL is only in the process of being submitted now.

At least two more carboxamide fungicides are also in development. BASF hopes to have the first of its range of Xemium products available in 2012, while DuPont was unwilling to comment on the expected timelines for penthiopyrad.