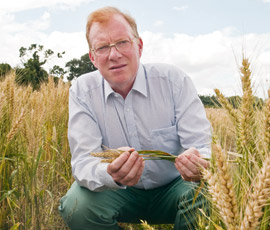 Durable disease resistance remains the key aim for the plant breeding industry and is vital for food security, particularly as pesticides have a decining role, according to a top researcher.

Pesticides have done an excellent job, but are now approaching the twilight of their career, as resistance and EU legislation limit their effectiveness, he stressed. “The SDHIs will prolong their cause for a while, but we won’t have them forever. That’s why we need to combine disease resistance with high yields.”

Genes that increase disease resistance often depress yield, he noted. “There’s a three-way trade off between crop height, mildew and fusarium, for example. Dwarfing genes tend to increase susceptibility to mildew, but decrease the damage done by fusarium.”

Likewise, mildew resistance in barley increases the crop’s susceptibility to spotting diseases. “Ramularia is increased by the mildew resistance gene. But it’s a complex situation, with environmental factors having a role, too.”

In the UK, selection for yield has hampered selection for septoria resistance, he warned. “There are some varieties that buck the trend, but there’s no such thing as the perfect variety. The yield penalty can be reduced, but not eliminated.”

He suggested that breeders should select for yield and quality. “It’s important to avoid super susceptibility. We need to maintain genetic diversity, trial new developments in different environments and use genomics to accelerate progress.”

A 40-50% increase in wheat yields is required by 2030 in order to feed the growing world population, Keith Edwards of the University of Bristol told the seminar.

As historic genetic advantage has seen yields rise by 0.5-0.7% each year, the increase will be just 13% in 20 years’ time unless the current system changes, he warned.

“There’s no doubt that plant breeding will be the main delivery mechanism of this increase,” he said. “However, at the moment, plant breeders are limited in their scope.”

Recommended List performance governs commercial plant breeding activities, he acknowledged. “They can’t ignore Recommended List traits, so they become goals in themselves. The breeders that take risks are more likely to fail than those that don’t.”

This is where academics can help, he pointed out. “Ours is a risk-free environment. We can speculate, without the risk of going bust, and we can test and generate basic tools and datasets. So collaboration between the two groups is essential for the future.”

“Academics, however, can. We can take wild relatives and exotic lines, so that they can be crossed with adapted lines, as we have the tools to help with selection. Once the best are selected from this work, the breeders can produce improved cultivars.”

Professor Edwards concluded by admitting that the future looks good. “We know what the challenges are and we have the resources and dedication to meet them.”