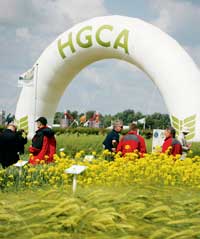 Cereals is Europe’s leading event for the arable sector, and more than 26,500 visitors and 400 exhibitors are expected to pass through the gates at host farmer Robert Law‘s land on the Cambridgeshire/Hertfordshire border

To help you make the most of your visit, Farmers Weekly has pulled together some of the key technical and business highlights that this unmissable event has to offer. 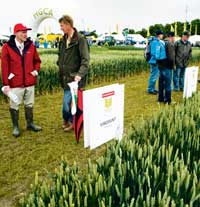 A total of 30 companies will be presenting more than 90 crop plots, offering the chance for many growers to see innovations first-hand. But what gives these small crop areas a real buzz is the direct contact they provide to some of the country’s leading researchers, plant breeders and technical managers.

Within the crop plots you will see literally hundreds of varieties, those already on the Recommended List or the candidate cereal, oilseed rape, pulse and sugar beet varieties. The HGCA has 135 different varieties on their stand and Nickerson will have 52.

Other new varieties on show include KWS Santiago and KWS Podium, the only milling wheat up for Recommendation this year and KWS Cassia, a two-row feed barley from the same breeding programme as Saffron.

Syngenta Seeds will be launching its winter malting barley varieties Winsome and Purdey, plus the new nabim Group 2 winter wheat variety, Kingdom; while Monsanto will be announcing DK ExPower and DK Sequoia, the first low-biomass hybrid.

The plots will also represent the latest thinking in agronomics, rotation and disease management, as well as giving visitors first-hand access to the new carboxamide fungicide chemistry from Syngenta and Bayer.

The Oxford Farming Conference is joining forces with the Cereals Event to launch a new summer conference. Debates will be run on both days with different panellists.

The afternoon (2.30pm) sessions will debate the Campaign for the Farmed Environment: Is the campaign working and is it commercially viable? Panellists include Aileen Kirmond (Environment Agency), Andrew Brown (Farmer/environmentalist) and Cereals host farmer Robert Law, who is an OFC Council member. 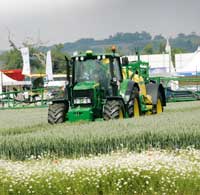 There will be 52 trailed, mounted and self-propelled sprayers from more than 23 manufacturers in Syngenta’s Sprays & Sprayers arena making it one of the biggest and broadest demonstrations at the event.

Boom widths range from 24m to 40m, tank capacities up to 6600 litres and forward speeds close to 50km/hour. Two machines will be launched; the much anticipated Challenger RoGator 600 self-propelled sprayer range and Amazone’s UX6200 Super – with its 6600-litre tank it is aimed at contractors and large-scale farmers. Syngenta will present the ever-popular Farm Sprayer Operator of the Year award.

Plenty of machinery will be put through its paces in the working demonstrations which take place on both days of Cereals. Several new pieces of kit are on display for the first time, including Claas’s 524hp Xerion 5000 and the Massey Ferguson 9280 Delta “hybrid” combine. Simba is launching its 4.5m and 6m FlatLiner models and there will also be several new features and upgrades on Vaderstad’s Rapid, Spirit and Seed Hawk drill ranges. Grimme’s new six-row trailed sugar beet harvester, the Rootster 604, will also be on site.

The Renewables exhibition area will focus on green energy generation and supply opportunities for UK farms. It’s sponsored by Drax Power and supported by the National Non-Food Crops Centre (NNFCC).

Drax Power is keen to develop a stronger biomass supply chain in the UK while Agrovista is sharing part of its stand with SmartestEnergy, the UK’s leading purchaser of independently generated energy.

Enagri will be launching the new Directory of UK Biomass Power Plants 2010, which assesses the potential scale of the UK biomass-to-electricity market over the next five years.