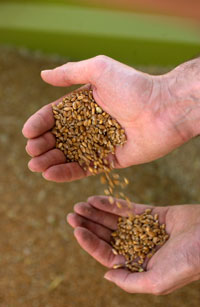 The deal, which builds on the success of the two companies’ Hereward contract, will run from 2012-16 and provides the longest forward contract available to growers.

Through Openfield, Warburtons buys about 180,000t of mainly Hereward wheat every year and over the life of the contract the baker has purchased more than 1m tonnes of UK farmers’ bread wheat.

Openfield commercial director Graham Lacey said the contract’s commitment to growers was reflected in a relationship based on more than just price. “For instance, our acceptance rate of more than 90% is well ahead of the rest of the industry.”

Grain prices are based on a pool methodology, which was supported by a forum of contract growers, Mr Lacey said. “Many of our farmers have been with us since the very start of the contract and for some, Warburtons milling wheat is the principal enterprise on their farms.”

The contract began in 1997 when the Warburtons brand was relatively unknown outside the north-west of England. Since then Warburtons has grown to be the largest bakery brand in the UK.

The contract provides a secure market for growers and comes with its own set of growing protocols, including a bespoke agronomy package tailored to individual loaf characteristics demanded by Warburtons bakers.

“The protocols are based on what our bakers call the ‘functionality’ of a loaf,” said Warburtons purchasing director Bob Beard. “It’s not just about growing for the highest possible protein level. It’s about loaf height, crumb softness and the right texture. So we don’t apply late foliar N, for example, as we just didn’t see the benefit of this in the quality of the grain.