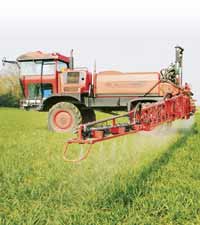 Novel carboxamide fungicide chemistry is likely to attract plenty of attention at this year’s Cereals event. Mike Abram explains why

Just over 10 years ago a new fungicide class, the strobilurins, boosted the production of wheat and other crops thanks to greening properties and excellent disease control.

Yield increases over previous fungicide regimes of 1t/ha were common. The debate wasn’t whether to use strobilurins, but how many times, and, to begin with at least, whether you needed any other fungicides.

But within five years the dream had started to turn at least a little sour. First powdery mildew, and then crucially Septoria tritici developed enough resistance to render strobilurins virtually ineffective.

Manufacturers had to find other reasons why they should be used – the debate about their physiological effects and yield boosts in the absence of disease was particularly intense – and yield claims reduced to a contested, and perhaps unreliable, 0.4t/ha.

It is an experience that should serve as a cautionary tale as arable growers prepare to use new fungicides that could easily be described as strobilurins mark 2. The claims for carboxamide fungicides sound remarkably similar to those initial strobilurin trials: Yield responses of about 1t/ha, excellent disease control and some physiological benefits.

The chemistry is not new. BASF sold products containing it in the 1970s, while the firm also developed boscalid (as in Tracker) more recently, with some success.

But the next generation is almost with us. At least four manufacturers are developing products containing carboxamide chemistry, and the first two will be on show at Cereals 2010.

Some growers will have used Syngenta’s Bontima, containing its carboxamide, isopyrazam, plus cyprodinil in barley this spring. The firm will also be demonstrating its wheat version at Cereals, while Bayer CropScience has various formulations based around bixafen on show.

The wheat versions have been held up waiting for a maximum residue level to be set in Europe, a process that can take up to a year. There is a small chance that bixafen could emerge in time for a small test market around Cereals, but the first major use of these products, approval permitting, is likely to be in 2011.

So what can growers expect? The first is that their initial use is likely to be much more closely regulated than when strobilurins were released.

These fungicides need a partner, and in wheat, that has to be a triazole fungicide. However good the disease control claims for carboxamides, no manufacturer or agronomist is likely to be recommending their use without one.

And don’t be surprised if the regulatory authorities also restrict the number of applications per season. After septoria resistance to strobilurins was found, those products could only be used twice.

It makes good sense. Carboxamides have a single site mode of action just like strobilurins, making them potentially vulnerable to resistance development. Indeed, they work on the same fungus energy production pathway as strobilurins, just one step before.

So will they replace strobilurins? It is a question many advisers will be looking to answer in this year’s trials, and certainly it will be interesting to see how the manufacturers position the new products against their existing strobilurin offerings.

With claims of exceptional disease control and 1t/ha yield increases, the place for strobilurins might be limited to specific situations, such as take-all, or maybe for rust control, where they remain exceptionally strong. Similar questions need to be answered for the role of chlorothalonil in the future.

Another interesting question to pose to experts is whether these products give more flexibility over fungicide timings. Initial trials have suggested the new chemistry gives long-lasting protection. Does this mean timings will become less important?

Perhaps the most important question of all is cost. Every grower will expect good new products to cost more, but how much more? When commodity prices are under pressure, the price premium will need careful evaluation.