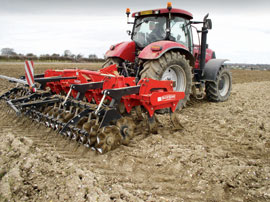 The now-familiar cultivator format of deep soil loosening tines combined with discs to work the seed-bed will feature prominently among the live equipment demonstrations at Cereals as suppliers set out to convince growers that their variation on the theme is the best.

Among them, Quivogne UK plans to demonstrate its two principle options working behind Case IH tractors – the Saturn and Jupiter.

A 5m version of the Saturn will illustrate this implement’s shallow curved tine soil loosening legs designed for low draft, which are followed by two rows of wavy discs for mixing and incorporating stubble and chopped straw.

The heavier duty Jupiter tined cultivator, which is an alternative to the normal disc-based machine, will be shown in 6.3m format. It consists of rows of evenly-spaced spring loaded cultivation tines followed by levelling spring fingers.

Unusually, it splits down the middle so that the two frames fold to a vertical position for transport and in work it is carried on two pairs of staggered wheels, with depth wheels fitted on each frame for stability in work and effective depth control.

A 3m Pluton tine, disc and packer cultivator completes the line-up for the Suffolk company, which should have a Soucy tracked Case IH tractor working on its plot.

Cornwall’s Teagle Machinery will demonstrate two machines from the Tulip range on its plot – the familiar Roterra and the Multidisc Vario, a disc and tine implement on which the tines can be raised out of work.

The Roterra power harrow, being demonstrated in 300/35 series guise, comes with a unique “club ended” tine that Teagle’s UK sales director Geoff Osborne says is easier to drive through the soil and so reduces fuel consumption.

The 3m version working on the day has 12 rotors, a sprung levelling board and 500mm packer roller.


Growers who like non-powered cultivation machinery should take a look at the Multidisc Vario. This high-speed disc and tine cultivator has a format similar to a number of other implements – but with the unique difference tillage intensity can be easily changed by hydraulic adjustment of the six leading tines.

It should particularly suit farms with varying soil types as well as in different working conditions, such as cereal and maize stubble, brassica crop residues and ploughed land.

Fine tuning can also produce significant fuel savings, adds Mr Osborne. The company says that the machine is suitable for working not only in stubble, but maize.

British manufacturer Sumo plans to have both rigid 3m and folding 4m trailed Trio cultivators in action on its demonstration area. This well-established implement combines deep soil working tines with two rows of fixed-angle discs and a roller-press for working the soil profile in preparation for cereals and oilseed crops.

The working plots will also provide the first opportunity to see the latest development for the Versadrill.


Adding hydraulically-adjustable levelling paddles is intended to present cloddy soils to the coulters in a neater and more uniform way when following the plough and press in a traditional establishment regime.

Equally, with deep soil-loosening legs mounted ahead of the disc coulters, the Versadrill can subsoil and drill direct into stubble for minimum cost one-pass working.

JC Machinery has been busy developing its range of Imants spading machines, with a host of successes in a wide variety of applications on UK farms. Latest in its line-up is the 27 Series spader, which the company says is aimed at smaller growers with perhaps 12-16ha of specialised root crops that require a thoroughly-worked seedbed.

Power requirement is from 45-80hp, and the machine is available in 1.2m, 1.5m and 1.8m widths working to a depth of 350mm. A contra-rotating spiral roller leaves a neat finish.

Dowdeswell Engineering will be promoting the push-plough concept with the new 105 PS. Developed from the rear-mounted 105 Series introduced last year, the newcomer will be produced in two- and three-furrow sizes, with manual adjustment of furrow width from 14- to 20-in in 1-in increments.

Jason Stringer, technical manager at Dowdeswell, says the new plough will be in pre-production form pending final tweaks and adjustments paired up with a five-furrow 105 Series plough on a sub-200hp Massey Ferguson tractor. That should highlight the combination’s capabilities on relatively small prime movers, he says.

Dowdeswell has moved to reintroduce the front plough to its range following interest from farmers wanting to take advantage of tractor horsepower and front linkages, but who are not so keen on large semi-mounted ploughs.

Making use of the front linkage for something more useful than hauling a fuel-sapping weight block is the principle aim, as is the versatility of having two ploughs that can be used individually as well as together.

Tidying up field corners is one task more easily handled by a front plough than a rear unit, especially a semi-mounted one and, of course, the front unit can be lifted out of work or removed when fewer furrows are needed to work up hill or in heavier conditions.

JCB Agriculture aims to put on a show in conjunction with both Trimble GPS steering systems and Gregoire Besson cultivation equipment.

JCB’s full range will be on show, including Fastrac 2000, 3000, 7000 and 8000 series tractors. The enhanced “Xtra” specification for the mid-range 3000 series includes JCB’s P-Tronic semi-powershift transmission, with 24 speeds and full auto shifting functions.


Xtra-Drive makes it possible to drive the tractor using only the accelerator and brake pedals thanks to automatic action when bringing the machine to a halt and starting off again. JCB says the demonstration plots provide an important showcase for the tractors’ features and benefits.

Gregoire Besson‘s contribution to the JCB working plot is likely to feature the new Combimix cultivator along with the HRPC7 lightweight plough.

Nathan Watkins of LH Agro says that Topcon’s new agricultural-specific controller, the X30 console, will also be on display; it forms part of the System 350 auto steer package, which will be shown with live demonstrations fitted to a variety of both steer-ready and non-steer-ready tractors on the company’s demonstration plot.

The X30 console features “plug-and-play” for direct communication with major manufacturer controllers using Isobus, and it can work with sprayer auto section controllers too.

The interface design is icon-based via a 12.1-in touch screen, and processing power comes from a 1.6GHz system with up to 32Gb of memory.