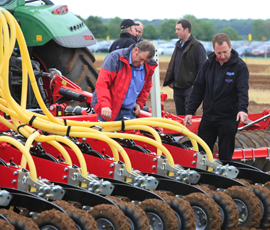 Close to 26,000 visitors attended Cereals 2013 – the second highest number of visitors in the event’s history.

Organisers of the event, Haymarket Exhibitions, have revealed that 25,850 farmers, agronomists and professionals attended this year’s event on 12 and 13 June. The highest ever attendance was 26,900 in 2011.

Allan Wilkinson, head of agriculture at HSBC, which is also Cereals’ principal sponsor, described the show as more buoyant than expected. “It was really busy and our best event yet,” he said.

“There was a sense of realism about the coming harvest, with many combinable crop businesses facing large falls in cash flow. However, one poor year does not materially affect a well-run farming business. Visitors were making the most of the event to focus on the undoubted longer-term opportunities that exist.”

Event director Jon Day said the figures reflected the resilience of the arable sector and the determination of farmers to bounce back.

“The feedback from all involved, both visitors and exhibitors, has been exceptional,” he said. “There was a tangible sense of optimism despite all the recent weather-induced problems. People seem determined to put the past year behind them and look to their 2014 cropping with renewed hope and determination.”