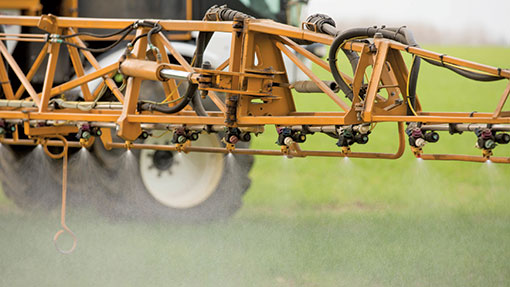 Many growers have experienced a tough year in keeping septoria out of their wheat crops and some experts have commented that it may be down to increasing resistance to key fungicides. Adam Clarke reports from Cereals 2014.

High disease pressure this season has tested fungicides to the limit and it’s believed that septoria sensitivity to the two main azole fungicides may have been further reduced.

Farming giant Velcourt, who grows about 54,000ha across the UK, has a broad perspective of disease pressure and the success of fungicide programmes.

A mild winter allowed septoria to build this season and in some parts of southern England, wheat crops were hit with 1,200mm of rain, allowing the disease to proliferate and spread.

“Some of our crops have received five fungicide sprays this year, including two SDHIs, and there is only one green leaf left on some plants.

“The SDHIs are extremely important, but they are not water tight and I believe there has been a further shift in septoria sensitivity to the two main azoles,” explained Mr Norman.

He added that he had not seen any differences at this stage between the two, but independent testing of septoria isolates from Velcourt’s fields was ongoing.

Samples were taken after the septoria populations had been exposed to two or three triazole applications.

In the worst-hit areas, Velcourt’s farm managers have spent in excess of £120/ha on fungicide programmes, but conversely areas in the east of England, with much drier conditions, have resulted in a spend of about £50/ha.

“It really has been two extremes of septoria pressure, but what has stood out is that generally the early drilled wheats have suffered much more,” said Mr Mayhew.

With blackgrass also posing problems, on top of disease pressure, growers will have to pay even more attention to variety selection, drill date and even shift to spring cropping, said Mr Norman.

“Everything is pointing towards later drilling to manage the disease risk and it’s well known this will help reduce blackgrass numbers before establishment, too,” he added.

Andrew Flind, fungicide development manager at Bayer CropScience, urges caution about jumping to conclusions when assessing the decline in azoles such as prothioconazole.

Their own testing and that of independent organisations such as Velcourt are yet to produce definitive results and may not be seen until later in the autumn.

“It is well known that there has been a shift in septoria sensitivity to the azoles in recent years, but in our trials we are still seeing 65-70% control when using a straight azole at a full dose,” said Mr Flind.

The azoles are vital in the protection of the SDHI chemistry, such as bixafen in Aviator, as the azoles move through the plant leaf in the same way to offer the best support.

Mr Flind concedes that curativity of the azoles has been reduced, but the combination of the two modes of action will still give good control of septoria in the field.

However, he said that in Ireland and some areas of England, levels of the number-one wheat disease have been higher than in 2012 – the last extreme septoria pressure year.

With the carry over of disease from the mild winter, septoria has been present from the first T0 fungicide application and growers have been in a curative situation from the start.

“It’s unrealistic to expect clean leaves right the way up the canopy in extreme circumstances such as those experienced this year.

“Seeing 10-15% infection after the programmes have finished could still represent 80-90% control from fungicides,” said Mr Flind.

She points out that it is inevitable some fungicides will reduce in efficacy as the target pathogen evolves, but the data she has seen so far this season hasn’t set any alarm bells ringing.

“I haven’t seen anything that can’t be explained by timings that have slipped or doses not being robust enough. That’s when the wheels can fall off.

“Incrementally it will become tougher every season, but in the face of such pressure this year, control in commercial crops have generally been OK,” said Dr Burnett.

She added that resistance management strategies must be employed to slow the decline of chemistry such as the azoles by mixing actives and using high doses.

“The more applications, the higher the resistance pressure, so using T1.5 sprays is not advisable and maintain robust azole doses through the programme.”