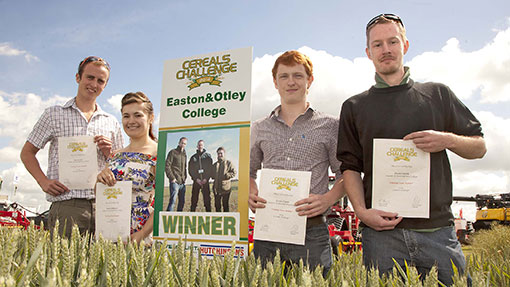 A team of four students from Easton & Otley College have won the 2014 Cereals Challenge, fighting off stiff competition from five other universities.

Crop nutrition provided the key to growing the most successful plot of winter wheat, with students being judged on their ability to make input decisions and control costs.

Team captain Owen Smith, said he was delighted with the result admitting that honing the right nutrient programme provided the biggest challenge.

“I am very pleased with how it turned out. The nutrient programme was the hardest part, but we went through it all and discussed it together as a team and this is what we came up with.”

Hutchinsons’ Dick Neale, helped judge the competition and admitted there was not a lot to pick between each of the entries.

See also: All of the coverage from the Cereals event“

They all went for very similar fungicide programmes focused around SDHI’s so the real difference came in physically measuring the nitrogen in the soil rather than using RB209.”

Armed with the specific soil index, the students were able to justify more nitrogen on the crop, opting for 250kg/ha of N, which was an extra 30kg/ha to other competitors.

Judge Keith Norman of Velcourt said there was a host of interesting approaches and this year’s competition showed the need for attention to detail.

The eventual winners were made up of final year students Kyran List, Helen Robinson, Lewis Fyans and Owen Smith, who received a trophy and prize of £1000 to share between members. Easton Otley College will also receive £500 following the win.