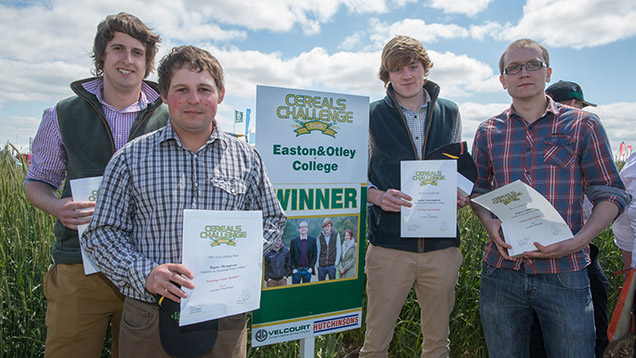 A team of four Easton & Otley College students have won the 2015 Cereals Challenge, making it two years in a row for the college.

This year the six teams were taken out of their comfort zones as they were asked to grow winter rye.

Team captain Ryan Thompson said he was proud to have kept the college in the top spot and hoped they could make it a hat trick in 2016.

He said: “None of us knew much about rye, so there was a steep learning curve and it was a really interesting challenge. We worked hard to research the crop and spoke to local farmers and agronomists. I think the hardest part was the marketing planning.”

The teams were judged on the quality of their decision-making, crop potential, profitability and communication with their grower.

Hutchinsons technical manager Dick Neale was one of the competition judges.

He said: “The competition this year was about a new venture for the teams as they grew their rye crops. Hopefully the participants learned the importance of good research and communication with their grower. The winning team did extremely well and we were impressed with the level of their effort overall.”

The winning students, who are all studying a foundation degree in agriculture management, take home a £1,000 prize to share between them. Easton & Otley College also gets £500.