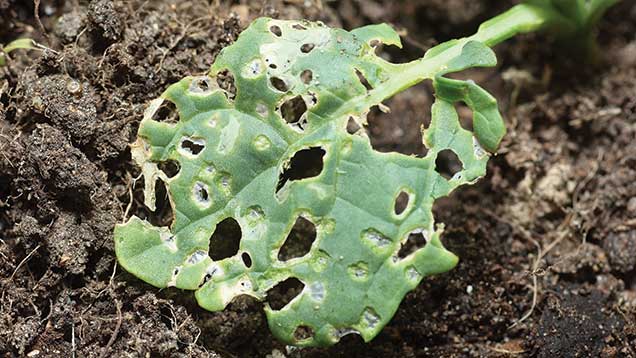 Reducing cultivations, picking the best variety and delaying drilling could form part of the fight back for oilseed rape growers against cabbage stem flea beetle attacks this autumn.

With neonicotinoid seed treatments unlikely to be available next season, experts said there are ways of helping ensure growers do not see a repeat of last year’s crop devastation.

About 5% of the oilseed rape crop planted last autumn was lost to flea beetle damage, with 1.5% redrilled, leaving 22,000ha ripped up in England, equating to 3.5%, an AHDB Cereals and Oilseeds survey showed.

According to a separate survey, the neonics ban prompted 11% of growers to vow they would not grow oilseed rape again.

Sussex-based agronomist Peter Cowlrick warned growers who were badly affected last year to brace themselves for more of the same.

“The likelihood is that those areas affected last autumn will have a high flea beetle population again, so the risk to oilseed rape crops in those areas will be higher this autumn,” he said.

“If you had a bad case of flea beetle damage last year and used pyrethroids but suffered from poor control then the larvae hatching later this summer are likely to be resistant to pyrethroid insecticides,” Mr Cowlrick added.

When preparing to drill this autumn, Hutchinsons technical manager Dick Neale said growers should consider their cultivation methods as the wrong approach will encourage flea beetles.

“We have found that the more cultivation carried out before drilling, the worse the flea beetle problem becomes. By reducing cultivation there is less of a habitat for the beetle to hide from the elements and this impacts their activity,” he said.

Mr Neale recommended growers on chalky land to direct drill, and added that ploughing is a big “no-no” for flea beetle control, while Mr Cowlrick said that drilling into a good seed-bed will help.

“Achieving a fine and firm seed-bed is essential for good establishment to help the crop to get away from early flea beetle attack quickly. A vigorous variety coupled with rapid emergence can help with this,” he said.

Taking a simple soil test for nitrogen, phosphate and potassium will help growers decide on the fertiliser that’s going down with the seed, said Mr Neale.

“We could see a high-yielding crop this year and that will leave fields low on nitrogen so growers should think about the nutritional status of their soil. Nitrogen is what really gets brassica crops such as oilseed rape going early on.”

When it comes to planting, a link between early drilling and high levels of flea beetle last year was found, although Mr Neale does not think this was a major factor.

“Early drilling didn’t help the problem because until about the third week of August we had warm, dry conditions that were ideal for flea beetle. After that we had rain and the soil became sticky, it was cooler and crop growth increased,” he said.

Another tough lesson for growers is being prepared to lose some of the crop to flea beetle, said Mr Cowlrick.

For those who were badly affected last year, he recommended using a non-hybrid variety and higher seed rates.

“Last year the general advice was to not change your seed rates but we felt that was wrong. This will help enable a greater degree of dilution per plant across the field of adult flea beetles and may help the crop to cope better with any attack,” he said.

As many as 92% of oilseed rape crops in some part of England are being infected by turnip yellows virus (TuYV), according to a new survey.

The virus is spread by infected aphids and can cost growers up to 30% of their yield in bad cases.

The findings were described as “worrying” by John Walsh of Warwick University, who led the research on behalf of plant breeders Limagrain.

“Levels of infection are much higher than they have been for the past few seasons, with crops in Yorkshire up to 92% infected,” he said.

Generally these hotspots are where a lot of oilseed rape is grown, but there were surprising TuYV hotspots, such as a 74% infection in Somerset.

“Last winter was mild and there were high levels of peach potato aphid, leading to very high levels of the virus. Plant resistance is definitely the way forward,” he said.

Growers do use these products to guard against aphid attack, but Dr Gegas explained that aphids are building a resistance to the current pyrethroids available.