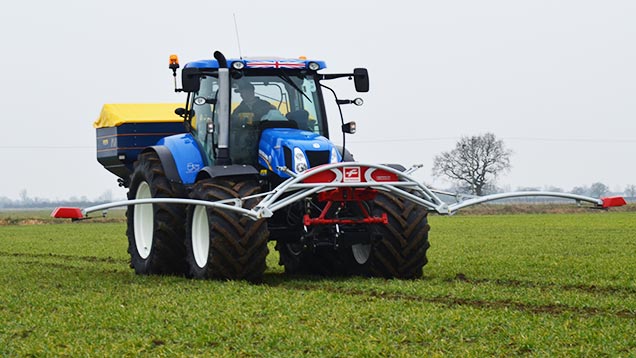 Matching nitrogen inputs more closely to a plant’s needs is the aim of a £1m Innovate project using technology from Germany.

“When we measured the optimum nitrogen fertiliser rate of a wheat crop in a previous project, we were very surprised to find it vary so much,” said Adas researcher Peter Berry.

“In six fields, there was up to a two-fold difference despite the wheat crop looking uniform.”

This prompted a four-year Innovate project to find a way of predicting this variation and then enabling farmers to apply nitrogen to match needs.

“The benefits will vary farm to farm, but for some, it could mean greater yields with the same overall total input or the same yields with less fertiliser.”

He explained there were two main factors determining this variation.

First, there is the demand by the crop which is largely driven by yield.

The second factor is how much soil nitrogen there is for the plant to take up.

Nitrogen demand can be predicted to some extent by historic yield maps, while the supply by soil can be estimated by measuring the crop biomass and calculating how much nitrogen is in the crop at any time, he said.

This is where GrowHow’s Isaria machine comes in. It is a sensor mounted on the front of a tractor and the technology is proven under German climatic conditions and is currently going through extensive field scale and small plot trials.

The idea is that more nitrogen in an area indicates greater soil supply. Then combining this data with yield data allows an estimate of the fertiliser rate across a field.

“We are currently testing it in wheat with tramline strips in the first year and we are looking to include barley and oilseed rape in subsequent seasons.

Another element of the project is to look at variably applying plant growth regulators to oilseed rape.

“The scanner is easy to attach on a tractor in 15 minutes and you can get the green area index map of a field if you are going through it with a treatment and then vary growth regulators according to GAI,” Said Mr Berry.