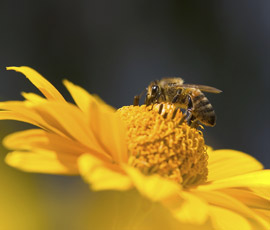 Chronic exposure to two commonly used pesticides in farming kills worker bees and damages their ability to forage for food, according to a new study.

Biologists at the University of London conducted field studies into bumblebees using neonicotinoids and pyrethroids at concentrations similar to field-level exposure.

The Gill/Raine study mimicked realistic scenarios in which crops were sprayed with different pesticides and dosages at different times.

Forty early stage bumblebee colonies received four-week exposure to two pesticides that are frequently encountered when foraging on flowering crops: the neonicotinoid Imidacloprid – an active ingredient of Bayer Crop Protection – and Lambda-Cyhalothrin, a generic active ingredient originally developed by Syngenta but now widely manufactured by many other producers.

Imidacloprid was provided in a sucrose solution at levels that could be found in nectar and cyhalothrin was administered following label guidance for field spray applications.

Bees were able to forage in the field providing a realistic behavioural setting, and the foraging behaviour of individual workers was recorded using radio frequency identification (RFID) tagging technology.

The researchers found that bees exposed to imidacloprid were less able to forage effectively, particularly when it came to collecting pollen.

“Currently pesticide usage is approved based on tests looking at single pesticides. However, our evidence shows that the risk of exposure to multiple pesticides needs to be considered, as this can seriously affect colony success.”
Nigel Raine

This meant treated colonies had less food available to them, so could not raise as many new workers. On average, the percentage of workers leaving the colony and then getting lost was 55% higher in those receiving imidacloprid than those that were not exposed to pesticides.

Combined exposure to the two pesticides “increases the propensity of colonies to fail”, added the researchers.

Ecologist and study co-author Nigel Raine said: “Currently pesticide usage is approved based on tests looking at single pesticides. However, our evidence shows that the risk of exposure to multiple pesticides needs to be considered, as this can seriously affect colony success.”

Bees are vitally important to agriculture for pollinating our food crops and maintaining biodiversity in the rural environment.

However, bee numbers have been declining worldwide in recent years and conservationists claim that pesticides are a contributing factor, in particular neonicotinoids.

Last month, a DEFRA report rejected the research and said it would not change existing legislation.

Following the release of this latest report, a DEFRA spokesman said: “We are looking at the risks of pesticides to bees as we take any threat to them very seriously.

“However, until we have all the evidence back from our research we won’t be putting in place any new restrictions. We will act if our new evidence shows the need.”

Luke Gibbs, spokesman for Syngenta UK, branded the latest study “unrealistic” and said there was no evidence that pesticides damaged the health of bee populations.

“This study deliberately encouraged bumblebees to feed on a sucrose solution containing an insecticide for four weeks in the laboratory,” said Mr Gibbs.

“To reach the solution they were forced into contact with a potentially lethal dose of another insecticide before leaving the lab to forage. The possibility of this scenario being repeated in the field is highly questionable.”