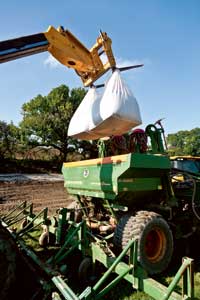 This month it is the turn of complex compounds to shoot up in price, catching up on last month’s nitrogen costs which remain unchanged.

The sales of compound fertilisers are reportedly brisk, especially in arable areas. Farmers managing grassland appear to be sticking closely to their financial budgets resulting in lowered volumes of purchases.

Global urea prices are still high and deliveries from the UK preferred supplier, Egypt, have been disrupted by the recent troubles. Importers have found alternative supplies with little difficulty, albeit at a price.

With over 90% of our domestic nitrogen market satisfied, the increased price of nitrogen may seem somewhat academic, were it not for the fact that the spring price will form the basis for the discounted new season price in June. The first of May is less than three months away and the forecast price for urea in May/June is already €100/t greater than in May last year.

Ammonium nitrate started this season at £215/t. Today it is £330. This illustrates two things: firstly the early buyer has again profited, and secondly new season nitrogen will probably be in the high £200s. But, given the volatile state of the Middle East, anything could happen.

on par with UK

*All illustrated prices are based upon 24t loads for cash payment month following. Prices for smaller loads and 50kg bags will vary considerably.