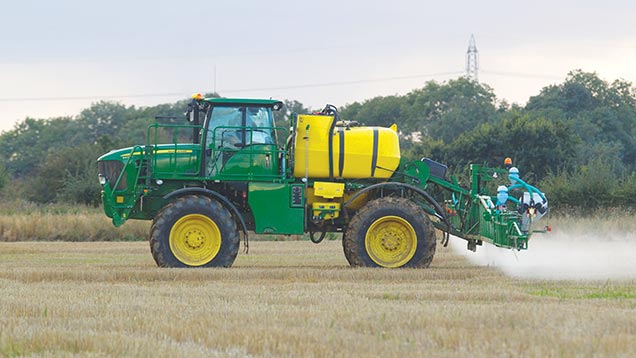 Spending £120-£140/ha on weed control before you have even seen the crop emerge puts wheat production under considerable financial pressure, believes one expert.

Growers who want to reduce their chemical bill must look at the whole rotation and be aware of the herbicide limitations, as well as the opportunities for making agronomic changes.

“However much money growers decide to invest in the early pre-emergence herbicides, they are only an option if farmers put effort into non-chemical cultural control methods too,” says John Cussans of Niab Tag.

“Grassweeds are a rotational control issue and need an integrated solution.”

While the same advice isn’t right for all situations, everyone has to cope with the fact that there aren’t any post-emergence herbicide solutions that can be relied on in wheat, he adds.

“That is very different to the situation in oilseed rape, where you can get two good post-emergence hits.

“For this reason, skipping the pre-emergence timing in winter wheat isn’t an option,” he says.

If winter wheat is already costing too much to grow, Dr Cussans suggests growers reconsider their drilling plans.

“Why not grow spring wheat instead? It gives you an opportunity to sort out grassweeds before the crop is drilled and it won’t cost you as much in inputs.”

Where a “carpet” of blackgrass is expected, it would be unwise to proceed with drilling, he warns.

Those who have 10-100 plants/sq m should question what they are doing, he advises.

“There are things that can be introduced that will help. But it means changing your view and being prepared to use cultural control methods across the rotation.”

Before looking at pre-emergence strategies, Dr Cussans points to some cultural control measures that should be in place.

“The upside of cultural control is that it potentially allows you to drop some things out of the pre-emergence stack, or eliminate one of the early timings.

“So it can save you money, providing it is done right.”

A later drilling date can have a twin effect on blackgrass populations, advises Dr Cussans.

“Not only are the weed populations lower, because you have been able to spray off the early flushes, but the herbicides work better. The conditions in October are more likely to be favourable for residuals, so the results are better.”

Later drilling means a few weeks, rather than months, he clarifies. “We are talking about an October drilling date, which is only a few weeks later than most people are doing. The further you go, the better the effect on blackgrass, but a very long delay is far more risky.”

Putting more seed on where you have the most blackgrass is another option, he says.

“You need to up your seed rate by 30-50%, making it a big increase, to benefit from crop competition,” says Dr Cussans.

Variable seed rates also have a role, he believes. “You can use a map of blackgrass patches to create your seed rate map. It is a cost-effective way of improving the control in bad areas.”

The key with cultivations is to maximise the effectiveness of the time between crops, explains Dr Cussans.

“Having a bit more time is a good thing,” he says. “It allows you to make best use of whatever method you have decided on to get rid of the first flushes.”

Rotational ploughing can also have a place, he says. “We’ve all seen the figures on the effects of ploughing on blackgrass populations, as well as the variation. It has to be done well, or you can do more harm than good.”

Spraying as often as three times in the pre- and peri-emergence slot has put herbicide costs up and is very expensive at current grain prices.

This year, there is more choice due to the arrival of Sunfire (flufenacet) from Certis, which brings straight flufenacet to the market, he acknowledges.

“Having a straight flufenacet product available for the first time gives some flexibility,” he says.

“It mustn’t be used on its own, but it means you don’t have to go down the Crystal or Liberator route. You can choose your partner product.”

Where cultural controls have been used to their best effect, there are opportunities to make savings or reduce applications, he says. “Dropping something out of an expensive stack becomes possible. But the pre-emergence timing remains critical.”

Having straight flufenacet on the market can only be a good thing, believes Kent-based independent agronomist James Rimmer of CCC Agronomy.

Sunfire can be used both pre- and post-emergence up until the end of December (about the three-tiller stage or GS23).

In high grassweed situations, Mr Rimmer uses Avadex pre-emergence before going on with either Crystal or Liberator at the pre or peri-emergence stage, depending on moisture, and sees it having a possible post-emergence role topping up the level of flufenacet.

However, with the industry facing yet another shortage of Crystal, alternative options may have to be used, he notes.

“I would normally top up Crystal with diflufenican, while I would add pendimethalin to Liberator plus extra diflufenican when required. You can’t afford to drop a chink in the armour with blackgrass.”

He stresses that it’s all about the amount of active ingredient that is applied – especially where higher levels of flufenacet are being used instead of Atlantis – and that growers need to apply more than one mode of action at the pre/peri emergence stage.

“Remember that we only have the residuals for blackgrass – the contacts aren’t working reliably.”

“If you’re drilling from 1 October onwards, you need to be using 300-350 seeds/sq to ensure crop competition.”

Seed-bed quality can have an adverse effect on pre-emergence herbicide performance, he warns. “On heavy land, where blackgrass levels tend to be worse, there can be issues with the efficacy of the pre-emergence treatment. This is mainly due to cloddy seed-beds in conjunction with dry conditions.”

With drilling depth, Mr Rimmer advises growers to aim for at least 32mm of soil coverage to ensure crop safety.

Liberator gets mostly one partner

The majority of growers used Liberator with just one tank-mix partner last year, according to research commissioned by Bayer CropScience.

In 2014, just 18% of users added two or more mix partners – reflecting results from company trials that showed the consistent performance of Liberator is improved from one mix partner, but benefits from third and fourth partners are relatively small.

The most common partner for Liberator was prosulfocarb (27%), with diflufenican (20%) and pendimthalin (19%) following just behind. Again, this matched the results from weed screen trials, where Liberator + prosulfocarb was the best-performing mix.

The increasing importance of the pre-emergence timing for grassweed control was also clear from the study by Gfk Kynetec. Although the number of growers using two or three partners with Liberator increased between 2013 and 2014, widespread use of multi-way tank mixes remained unusual as cultural methods were more widely employed.

For Crystal, the picture was very similar, with few growers opting for three- or four-way mixes.