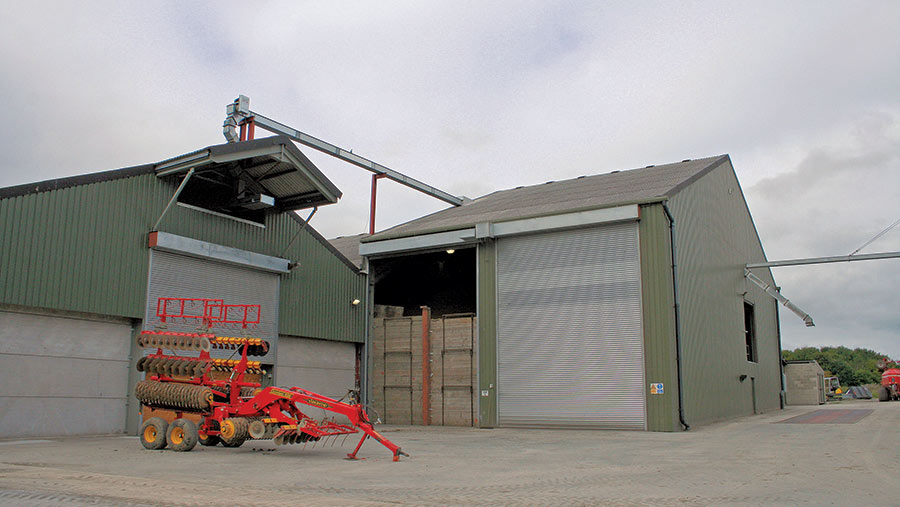 Having a continuous-flow dryer that can handle large quantities of damp crop with relative ease has transformed the harvest logistics on busy Manor Farm, Berwick Bassett in Wiltshire.

And that’s despite harvesting 750t in a day and having wheat coming in at 29% moisture, says Edward White, who farms in partnership with his father David.

That contrasts with the 2012 wet harvest when a 20t/hour intake system resulted in piles of grain being stockpiled outside at times and the 8t/hour tower dryer still working round the clock more than a fortnight after combining had finished.

The transformation started in 2008 with a new 6,000t steel-framed bulk store for farm and contract storage.

It was completed in time for harvest 2014 by a 3,000t extension and the biggest standard double-flow dryer that Alvan Blanch makes. Throughputs are rated at 53t/hour, taking barley at 20% down to 15% and 58t/hr doing the same with wheat.

Trailers coming in from the field pause on a ground-level weighbridge positioned in front of the main building to provide an accurate crop record before reversing into a 60t pit in one end of the building.

From there, a 100t/hour Perry handling system lifts grain and oilseeds 18m into the roof space, where a flow-and-return conveyor feeds the dryer, a 250t concrete wet grain bin and the pit again if necessary.

Dry grain coming off the combine or lifted from the dryer by a 60t/hour elevator is sent to a Perry level-fill conveyor running the full length of the 48m-long building.

Alternatively, grain can be sent to a former cattle shed across the way via a bridging conveyor, while oilseed rape is sent by a newly added cross-conveyor that emerges through the roof to feed a trip conveyor positioned down the centre of the 17.6m-wide, 43m-long extension.

Although timber barrier access allows outloading by bucket, Edward White’s preferred method is to position lorries on the weighbridge and open internal barriers so that crop can be pushed into the pit and elevated to a filling outlet.

“We can accurately fill a trailer to the maximum that way and by the time we’ve completed all the paperwork I reckon it’s just as quick as using a loader,” says Mr White.

“It also means outgoing samples can be taken safely from a retractable gantry pushed out from a roller-shuttered air inlet for the dryer rather than clambering up the side of the lorry.”

Microwave moisture sensors – installed for the first time on an Alvan Blanch dryer – should provide reliable, fully automatic operation once an installation issue has been resolved.

The layout of the store put up in 2008 left space for a tall tower dryer but the horizontal Double Flow occupies this space instead.

“We turned to the Alvan Blanch design because I questioned whether grain would flow evenly through a tower dryer wide enough for the 50t/hour throughput we wanted,” Mr White explains.

“If grain in the middle of the column flows a bit faster than at the sides, there’s a likelihood of ending up with unevenly dried grain.”

In contrast, he points out, the two drying bed conveyors of the DF 48000 ensure a consistent flow of grain in a bed of adjustable depth that gets mixed up as it cascades from one conveyor to the other.

“With light material being lifted off the drying beds and at the cascade section, there is little need for a separate aspirator or cleaner, although it could be argued that it’s still better to remove this material first,” says Edward White.

As it is, the new set-up has saved enormous amounts of time, running costs and effort.

“Things are so much easier, more efficient and more effective now the project is complete – and we’re future-proofed for a good few years to come.”