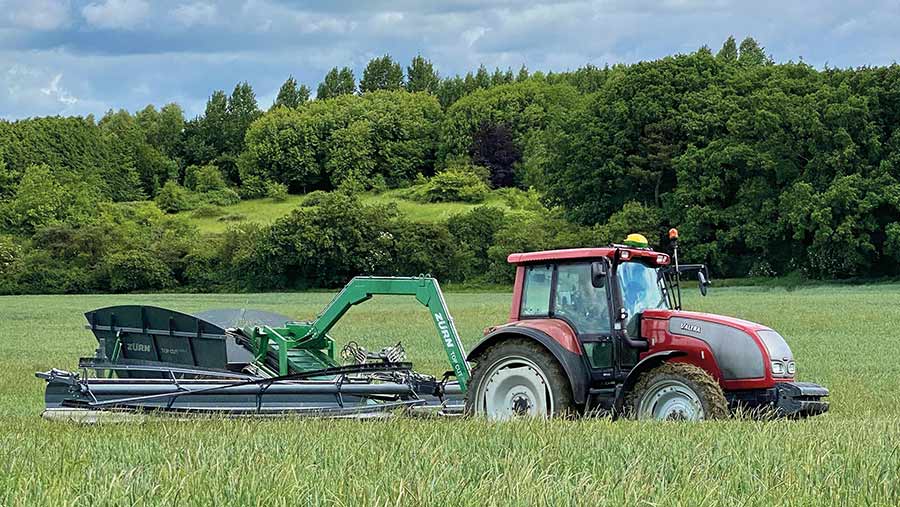 A small but growing army of combinable crop growers are resorting to medieval methods in their war on weeds, shunning modern chemical weapons in favour of decapitating their botanical enemies.

It might sound like Putinesque barbarism, but chopping off the heads of perennial troublemakers such as blackgrass, ryegrass and brome is fast becoming the only effective way to thin out seedbanks in fields overrun with herbicide-resistant weeds.

As the name suggests, the TCC is towed through a field to cut and collect any plants that stand proud of the crop, particularly those that don’t respond to conventional agrochemicals – and which are so abundant that hand roguing would be impractical.

One might expect its most obvious calling to be organic systems, where mechanical weed control is standard practice.

But so far, demand has come solely from conventional growers looking to overcome resistance problems and manage the rising cost of chemicals.

However, it’s certainly no silver bullet to herbicide-resistant grassweeds, and the damage to this year’s crop will have already been done; the soil nutrients stolen long ago.

The clean-up process is likely to be long and slow, but removing the seed-laden heads is at least a first step in improving field hygiene. 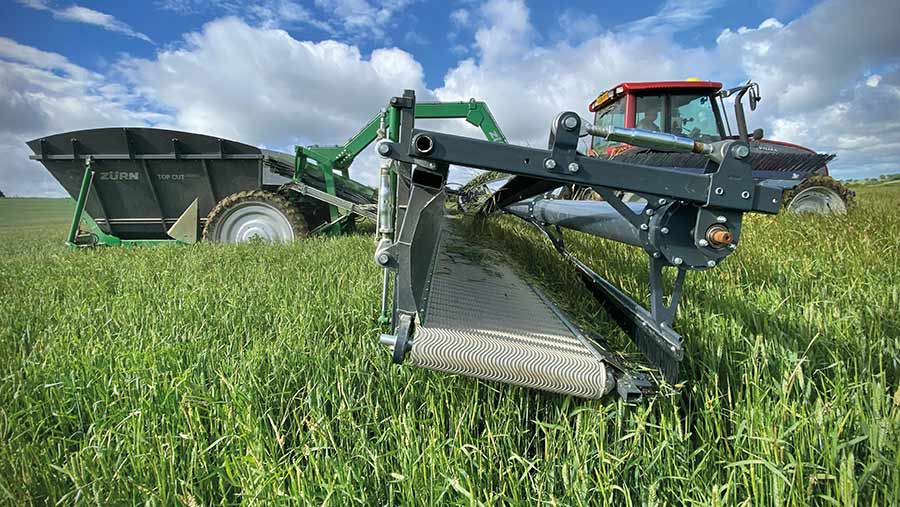 One obvious downside to the TCC is that is doesn’t have the all-season versatility of a sprayer, with its working window limited to a couple of field passes during the late spring/early summer.

That will make its near £100,000 list price rather hard to justify, even for the biggest and most well-heeled estates.

As a result, most buyers are likely to be contractors – such as Kevin Smith, who invested in a TCC for his Pasture Care business based in Thame, Oxfordshire, after seeing it at Lamma.

It was delivered in September and sat idle for six months, but is now in its peak season as problem weeds hit their early summer growth spurt.

How wide is it?

“The 12m version is the biggest that Zurn offers in the UK,” he says. “An 18m model has been made, but only the man that invented it has got one and I’m not convinced it would work – fields aren’t flat enough, and the cut would be too uneven.”

The modest working width – by sprayer standards, at least – means that on 24m tramlines the tractor and implement must form their own wheelings on every other pass.

The resulting damage equates to an estimated yield hit of roughly 3%, which is a fraction of the harm likely to have been caused by a significant blackgrass infestation.

Mr Smith says: “The beauty of the Valtra is that it has a short wheelbase, it’s manoeuvrable and is lightweight, which minimises crop damage. 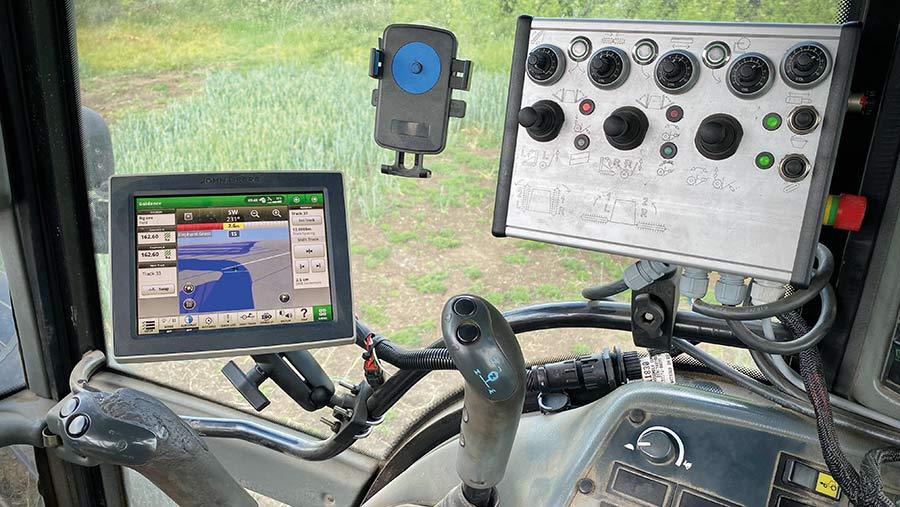 Combined with a 40kph transmission and suspensionless cab, you’d expect the ride to be hideous, but Mr Smith says it is “surprisingly comfortable”.

The TCC also runs on supermodel-skinny 210/95 R44 tyres, set at a 72in track width to match the tractor, but they are fitted on a rigid axle, which can cause unnecessary crop damage when turning.

Crop dividers are available but are rarely necessary now that wide wheat row spacings are commonplace.

The bigger wheels also raise the tractor’s ground clearance by 30cm and, together with a smooth foresty-spec underbelly, keep disturbance to a minimum, lessening the risk of premature seed shedding.

Mr Smith says: “Gently brushing the crop with the underneath of the tractor actually works in my favour early in the season, as the blackgrass springs back up and straight into the cutterbar, but ground clearance becomes more important as harvest nears and the risk of seed shedding rises.”

Weed seed heads are collected in the 7,000-litre hopper which, once full, is emptied into a telehandler bucket. There can be a lot of biomass to get rid of, with the worst infestations filling the hopper on every field bout.

The most effective means of disposal is to burn it. Trials suggest that composting the material is more difficult, as high temperatures are required to reliably kill the seed.

How low can it go?

Cutting height ranges from 30cm to 1.5m, but it comes down to how aggressively the farmer wants to tackle problem weeds – and whether they are willing to take a hit on crop yield as a result.

“One customer wanted the top of his oat crop taken out to allow me to cut as much of the blackgrass as possible, and it bounced back surprisingly well,” Mr Smith says.

“But others are reluctant to risk any loss of yield, so I try and work within the parameters they set.” 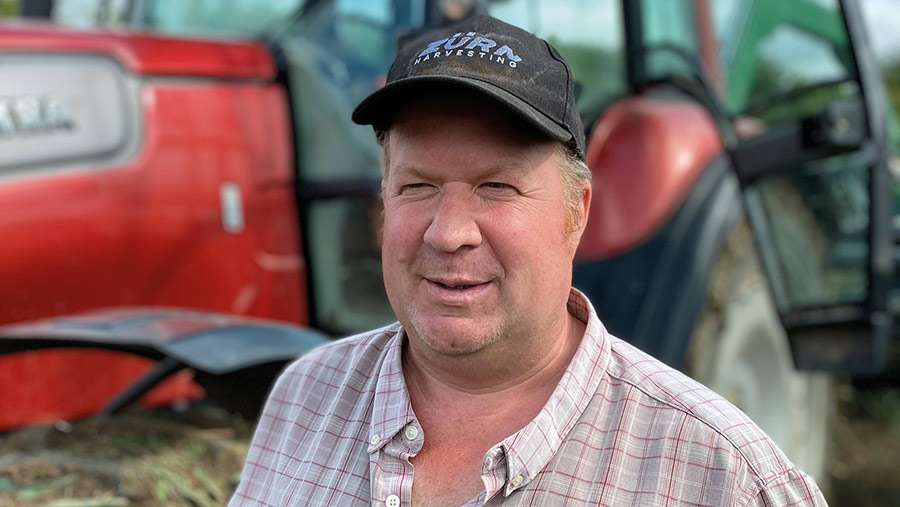 In most cases, the aim is to run the twin reciprocating cutterbar as close to the top of the crop as the operator dares.

Early trials by Niab suggest it is up to 90% efficient in the collection of blackgrass heads when employed in this way, although the timing – pre-shedding – is imperative.

Opting for a double cutterbar is said to reduce losses ahead of the conveyor, and the hydraulic drive allows for the speed to be altered to suit the conditions.

Operators can also tweak the pitch of the cutting table, while height is set on the tractor’s linkage and a jockey wheel at the end of each wing.

The cut seedheads are brushed onto a conveyor by a helical reel that whizzes around noticeably quicker than that of a combine.

Its position and speed can be altered – too fast risks flicking seedheads over the back of the table; too slow and they might fall off the front of the cutterbar.

They are then ferried along 40cm-deep PVC conveyors to a central elevator and up into the 7,000-litre hopper.

To the modern “feet up, auto-steer on” tractor driver, the manual height control – where one false move could obliterate a crop – is likely to be a daunting prospect.

Typical working speed is about 6kph, dependent on crop uniformity (and therefore the frequency at which the operator has to alter the cutterbar height) and weed density.

“In some places, the blackgrass is so rife that it can be hard to see the wheat underneath, and that makes height control a real challenge,” Mr Smith says. 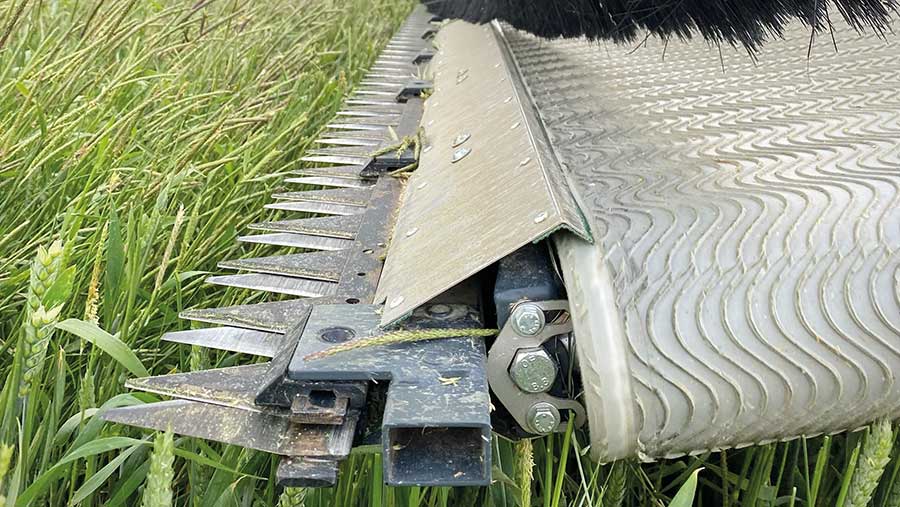 “In those situations, I have to make hundreds of decisions a day – cutting height, working speed, where to cut, where to unload, and so on.”

“As a result, it’s pretty tiring, so I restrict myself to 10 hours a day. A lapse in concentration could have a major impact on crop yield or mangle the machine, so it’s not worth the risk of working long hours.”

“I charge a day rate – £2,000 for the first day and £1,500 thereafter – which means I can concentrate fully on doing a good job, rather than maximising my output.”

When is best to do it?

Yield damage to the current autumn-sown crop will already have been done, so the timing of the TCC pass needs to maximise seed capture.

Mr Smith’s season started on 18 May in a wheat crop on the Fens, and he reckons he might be running well into July – depending on the weather and the effect it has on weed seed shedding.

“I probably cut some stuff a bit early this year, but it’s such a new approach that there’s no established way of doing things. Everyone has an opinion, but no one knows who is right.”

According to Will Smith, senior trials manager at Niab, cutting too early may encourage the weed to tiller at its base and then produce heads that aren’t tall enough to be catchable.

“Early June is probably the best time to harvest the weed heads, but that will change every year.

It’s about targeting the growth stage of the weed, rather than the crop, and striking when the height difference between the two is at its maximum.

“That’s easier for some weeds than others – blackgrass, Italian ryegrass and wild oats tend to stand above a cereal crop and should be fairly easy to capture.

Brome, by comparison, sits in the canopy and is surprisingly short – making it far harder to cut out effectively.” 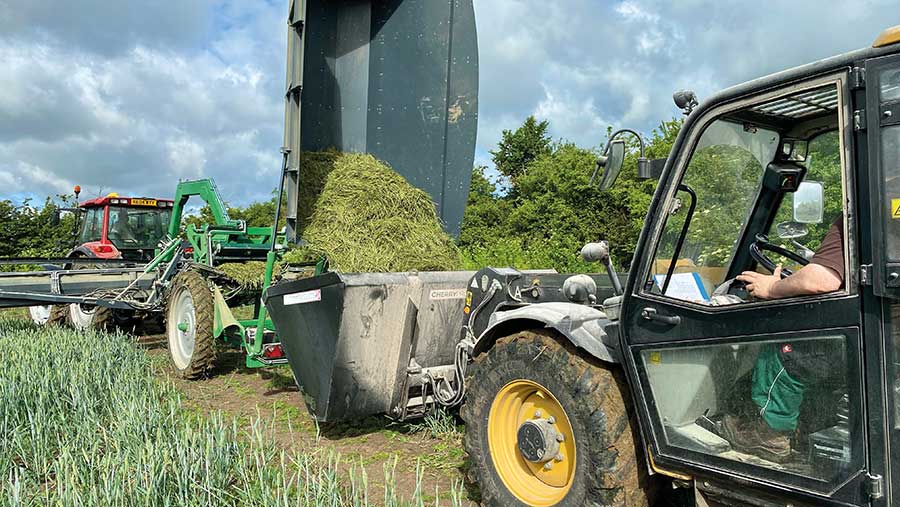 Growers might also benefit from tweaking their rotation and establishment system to improve the efficacy of mechanical weed control, says Will.

“Anyone transitioning to no-till is obviously trying to prevent the build-up of seed in the topsoil, and the combination of reduced cultivations and use of a harvest weed control method can help minimise seed return.”

Another option might be to grow a shorter crop, such as linseed, that will be dwarfed by the blackgrass – thus making it easier to harvest.

To extend the machine’s brief working season, Mr Smith got a local fabricator to fit a tow ball and electric connection to the rear of the machine.

This allows him to tow a caravan, expanding his territory well outside of Oxfordshire without being reliant on someone else for transport.

“Customers must think the circus is turning up, but once I’d bought the machine, I realised I’d have to travel a long way to keep it busy and logistics were going to be an issue.

“The diesel price has also gone through the roof, and it’s easier for me to carry tools and spares, so the system works well.”

Niab is trialling a 12m Top Cut Collect (TCC) at its site in Cambridge, targeting brome, blackgrass and several broad-leaved species across a series of crop plants.

According to senior trials manager Will Smith, mechanical approaches to weed control could become an important part of any growing strategy – but it will not be a standalone solution.

“It’s vitally important that most of the weed control in an autumn-sown crop is completed before Christmas to minimise the yield impact,” he says.

“If the end goal is 90% control then you want to be hitting at least 60% of that target before the turn of the year.

“Harvest weed control techniques could then deal with any remaining problem areas, but without that early control, weed density will adversely impact crop yields.

Niab is testing both the TCC and a combine-mounted weed seed mill, which have both proved effective at hitting different species late in the season.

“The Top Cut Collect suits early shedding weeds such as blackgrass and it was able to reduce the number of heads by 73% in a crop of winter wheat.

“By comparison, the seed mill had no effect on blackgrass prevalence in the following crop as there was so little seed left on the plants at harvest.

“In brome, the opposite was true. It holds on to its seed much longer, so the combine mill led to an 83% reduction in weed seeds in the following crop – yet the Top Cut Collect had little impact.”