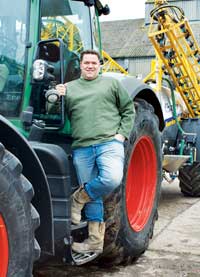 Keith Challen is a man with a goal. He wants to create a farming system that will cope with the legislative challenges in the next 10 years, such as the Water Framework Directive and potential reductions in nitrogen use, and still make a healthy return.

It is also the challenge the owners of the four farms that make up the 1400ha Farmeco joint venture in Nottinghamshire have given him, as their farm manager.

“In my head I’ve wanted to be farming more efficiently for the past 15 to 20 years. And now there is an obvious pressure on fossil fuels, it makes even more sense to find a greener way of farming,” Mr Challen says.

Like many growers, he realises soil is his greatest asset on the farm. “So I’ve been trying to build my soil fertility, increase organic matter and decrease compaction, so I can farm to the best of my ability, and create a farming system that copes with extreme weather.”

At a recent CTF meeting AICC agronomist Ruth East caused controversy by suggesting that no-till CTF systems wouldn’t be sustainable where blackgrass was a threat.

But Mr Challen doesn’t believe his system will fail because of grassweeds, even though he direct-drills as much as possible. For him it comes down to good management, maybe helped by a little bit of innovation. “I’m mindful of not getting into a mess.”

The good management starts with the not encouraging blackgrass in the first place. “Blackgrass is a marsh plant that thrives in poorly structured and poor-draining soils,” he says. “If that’s the case, it helps if you make sure you’re not in that situation in the first place.”

The improvements in soil structure from using both no-till and controlled traffic farming should help avoid giving the weed the chance to thrive. Applying gypsum has also helped avoid the anaerobic soils blackgrass loves. “The soil was high in magnesium, but applying around 3-4t/acre of gypsum twice in the past 10 years has had an incredible effect. I’m convinced it has helped,” Mr Challen says.

But he is also wise enough to know the importance of using other cultural controls to aid in grassweed management. He runs a broadly wheat/oilseed rape rotation, but where there are grassweed issues he opts to grow spring wheat and spring oilseed rape to help control the weeds out of the crop.

That allowed him, for example, to create three stale seed-beds last autumn to take out blackgrass in land intended for spring red wheat this spring. “Red wheat for Hovis has as strong a gross margin as winter wheat, so it is not going to be a poorer rotation and, for combating stubborn blackgrass, it is the main option.”

Similarly he believes he can grow Ability spring oilseed rape with lower inputs with a similar margin to that on winter oilseed rape. “We average 32cwt/acre (4t/ha) with lower growing costs. The key is waiting for warm soils, so it can fly when you plant it. We’ve been caught out where we’ve forced it too soon.”

Top grassweed killer Atlantis (mesosulfuron + iodosulfuron) has been another crucial plank for keeping grassweeds under control. “It has been a great product and Bayer has been excellent at telling us how to get the best out of it, but I do worry about resistance developing.”

That’s where the little bit of innovation comes in. He is looking at developing a system that treats oilseed rape as a row crop. Not only does he believe it would help increase the crop’s yields, but also reduce weed control bills and reliance on contact materials in other crops.

The idea is to sow oilseed rape into 75cm rows rather than his usual 25 cm spacing, building on the current thinking that the crop shouldn’t be drilled too thick to achieve maximum yield. “To get the sunlight [into the canopy] you need fewer, stronger healthier plants.”

At that spacing he doesn’t believe there will be any yield reduction, as long as the rows are not over-populated.

He’s already tried it by either blocking off two-thirds of the coulters on his Seed Hawk drill or using a sub-soiler with seeder box attached. “I’m happy with the results so far.”

For it to work, particularly as seed rates will be down to as little as 1kg/ha or 10-15 plants/sq m with a hybrid, such as Excel, a high proportion of seeds need to germinate and get a quick take-off, he says.

So he intends to place fertiliser with the seed to give it a kick-start. “The drill is rigged up to place granular or liquid fertiliser, and where we’ve placed 10kg/ha of nitrogen with the drill, there has been a much better visual effect than using 30kg/ha over the top for the past two years on the farm.

A swift, strong start also helps get the crop away from slugs and pigeons, and provide the canopy to drown out grassweeds, he adds.

But he has further innovations planned for weed control. “In future I want to band spray Roundup between the rows and use carbetamide over the rows.”

So he is building an 8m band sprayer to fit onto an old Fendt tool carrier that will spray between the rows. “The idea is to put a hooded sprayer on the front with the tank at the back. Potentially it could let me cut my herbicide bill by 50%. It’s my little R&D project.”

It had been Mr Challen’s goal to go to a controlled traffic farming system for around five years. The system allows him to repeatedly use the same tramlines for all operations – including cultivation, drilling, spraying and harvesting – year-on-year (picture below).

By cutting down the area of a field being run over by machinery during a year, those using the system hope to cut down on compaction in the majority of the field, improve soil structure and ultimately increase yields. It is a system being used relatively widely in North America and Australia, in particular.

But for it to work it needs an accurate guidance system – one that can guide you back to exactly the same point within the field year-on-year.

That was one of the hold-ups for Mr Challen. He had been using John Deere’s Greenstar SF2, a satellite-based system, for steering guidance, but it just wasn’t accurate enough to implement a controlled traffic system with its 10cm pass-to-pass accuracy.

For an effective CTF system you need to be within the 2cm a RTK network using land base stations can give. But he has now invested £50,000 in a RTK network, along with a local machinery dealer and some neighbouring farms, which meant this autumn’s crops were all established on a CTF system for the first time.

“Around 3000 acres will be in controlled traffic on the farm. We have a small area of roots with irrigation that will come into CTF following the root crops, and one contract farm that will be the exception.”

The system works on 8m multiples – he drills and harvests 8m, sprays 24m. Any cultivation is done using a 8m Rako, and a 4m sub-soiler also fits into the system. Any ‘random’ travel will be done on the 12m headland.

The Claas combine is on 3m tracks, but for the practical reasons the tractors won’t be modified to match the combine. Instead Mr Challen plans to move the tractors and implements around the tramlines made by the combine, without coming outside the edge of the combine tracks, to drill in slightly different rows year-on-year.

“To do that I need auto-steering on the implement to hold them true.”

He expects the move to CTF will further improve his soil structure and hopes for an improvement in yields. “Prevention is better than cure when it comes to compaction, and we will know where it is.”

The new system has also allowed him to continue downsizing his machinery. Instead of running a Quadtrak 9380 and the arctic John Deere 9620, he now has two 300hp, one 160hp and one 125hp Fendt tractors.

Compared with the 0.7hp/acre in 1995 he now only needs 0.25hp/acre. It is a measure of how much the workability of his soils has improved in that period, he says.