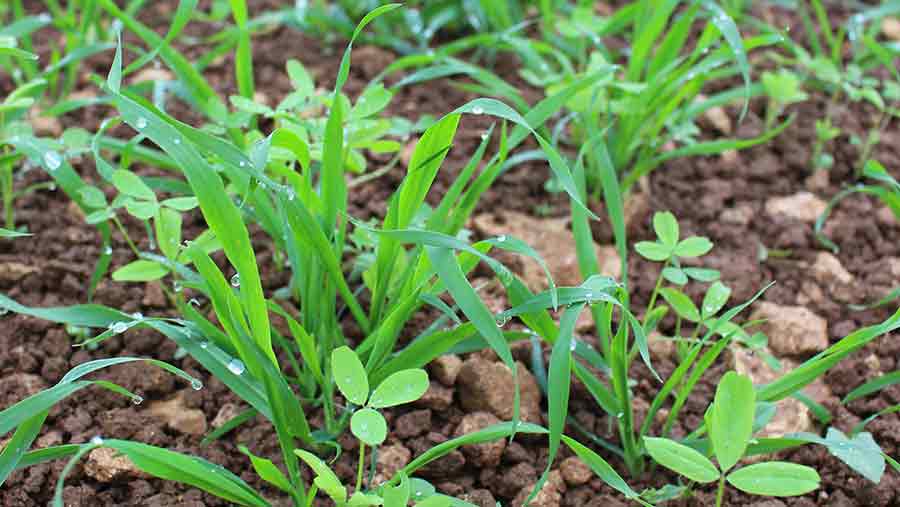 Cover crops have an essential role in tackling herbicide-resistant blackgrass by improving soil conditions to enable direct drilling of wheat on heavy land in spring.

Results from the second full season of trials in Agrovista’s Project Lamport mirror the findings in the first year, confirming that a spring wheat system can successfully bring heavily infested heavy land back into productivity.

The combination of spring and cover cropping resulted in a viable crop of spring wheat, which last summer yielded more than 10t/ha. Blackgrass counts were just four heads/sq m (see table below) in the same field where untreated areas had more than 2,000 heads/sq m.

See also: Get up to 1t/ha extra OSR yield with clover companion crop

“But drilling on heavy soil in spring can be a real challenge. So how can you increase success using cover crops?” asks Mr Woodhead. French researcher have been looking at this and Agrovista looked across the Channel for some solutions.

“Unlike the French system, we are not looking to smother blackgrass – we want it to germinate in autumn. This is achieved by drilling at a lower seed rate,” he says.

However, there is still enough cover to get moisture extraction in winter, thereby allowing direct drilling in spring.

So what makes the ideal cover crop in the system? It has to be easy to establish and not compromise yields or create a new volunteer weed problem. A good cover crop will also not habour pests and diseases and is easy to kill, says Mr Woodhead.

Black oats, vetch and berseem clover were chosen, as he was looking for crops that are not difficult to kill and incorporate and won’t act as a green bridge for pests and diseases such as mildew.

The carbon-to-nitrogen ratio is also important as it allows nutrients to be returned to the soil. Agrovista has developed two specific mixes – black oat and vetch for an environmental focus area-compliant mix (Chlorofiltre 25) and black oat and berseem clover (Chlorofiltre N-structure).

Mr Woodhead warns that not all black oats are the same. “We use a later-maturing variety to avoid seeing seed heads in the autumn and creating a new volunteer problem.”

The species used is Avena strigosa. The French system uses an earlier variety that is unsuited to UK conditions.

The cover crop is ideally drilled in late August and by drilling at a low seed rate, the creation of the seed-bed will allow and encourage blackgrass germination.

“We did try phacelia. It smothered the blackgrass, but once it was killed in spring, we saw blackgrass come back and there was no reduction in blackgrass numbers in the following year.”

Another learning point was to tweak seed rates when there is a high residual N level – such as when following OSR – to allow blackgrass germination.

He explains: “They were starting with very high blackgrass population. Growers need to have realistic expectations.” He advises farmers in this situation to plough the land first and bury the seed.

“It has to be proper ploughing to get numbers down and this is not easy on strong land. We have, however, had good success at Lamport.”

One important factor when establishing the spring wheat is the two strikes-system with glyphosate. The first application goes on four to six weeks before drilling the crop, followed by a second hit ideally four to five days before drilling to hit any blackgrass under the cover crop.

Direct drilling into a cover crop is one area that concerns growers, with fears of the drill bunging up.

But Mr Atkinson believe farmers should not worry, providing the drill is correctly set up as the root structure means plants are well anchored and the drill just runs through. Disc drills are preferable but not essential. Soil disturbance should be kept to an absolute minimum.

“The roots also reduce soil disturbance. Stale seed-beds tend to be dry on top and you see more soil fracturing when direct drilling, therefore, you see more blackgrass germinating in the spring.”

Looking ahead, one of the questions still to address is when to reintroduce winter cropping once the blackgrass numbers have been reduced.

“Other work includes optimal timing of burning off. Last year we had to burn off an area earlier and the following spring the wheat looked better. This may be due to nutrients being available earlier,” says Mr Atkinson.

This season at the Royal Agricultural University’s Cirencester site, the trial is looking at different establishment systems with four cover crop mixes including one treated with mycorrhiza fungi to encourage rooting, as used in France. “We will see if this brings any additional benefits.”