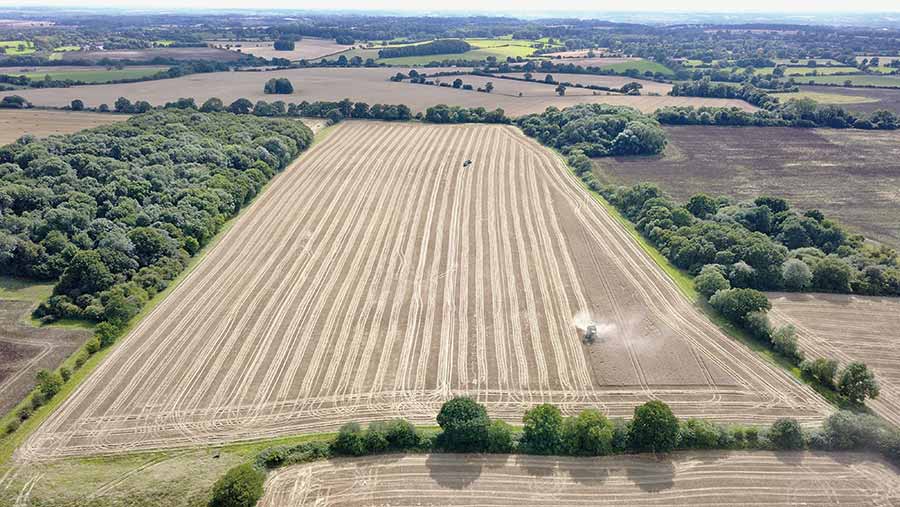 He believes the only limitations are being able to operate it safely, knowing what to look for, and being able to interpret the resulting images.

Mr Holtom realised the benefits of gaining an aerial perspective of his cropping when he occasionally got a ride with a hot air balloon company located next to the farm.

But, being controlled by the wind, the balloon inevitably didn’t travel over the farm and he instead ended up seeing the problems in all his neighbours’ crops.

The evidence of past agronomy and cultivation decisions always leaves a mark on the field, he says, but from above, this evidence is more apparent.

In particular, areas of compaction are far easier to identify, and an aerial perspective of a whole field can give insight into why certain areas are suffering a weed issue.

“The more you view your crops from differing angles, the more likely you are to notice yield-sapping problems while there is time to rectify them,” says Mr Holtom.

Drones, therefore, have the potential to be a useful tool, but while they can be bought and operated by any farmer on their own land, there are many rules that apply.

Breaking these rules will at best be financially costly, and at worst risks the safety of manned flights such as helicopters.

But equally, the user needs a certain level of farming knowledge to be able to interpret the evidence seen.

Farmers wishing to see their farm from above have two options: buy and fly a drone themselves or hire a licensed pilot.

For those wishing to have a go themselves, a suitable drone would cost about £1,000, but would also require a separately purchased tablet computer.

Such drones are compact, require very little prep and are easy to fly. The camera should also be of sufficient quality to identify features on the ground from the maximum height of 120m allowed in the UK.

It is the user’s responsibility to be aware of the rules, such as not flying within 1km of an airport or airfield.

Licensed pilots have to undergo a week’s classroom instruction on the principles of flight and navigation, before taking a written examination and a practical test flight.

They must also write their own 70-page operators manual, which includes all the most recent rules and regulations each year.

While Mr Holtom decided to become a licensed user after receiving his first drone for Christmas in 2014, most farmers are likely to stay as recreational users.

Those looking to use a qualified pilot, however, should opt for one who has undertaken their Basis qualification so that they have a better understanding of what they need to identify from the sky.

“Basis helps take non-farming drone pilots and bring a degree of realism to their what they are doing,” says Mr Holtom.

Since selling the family farm last year, Mr Holtom has used his skills to help other farmers identify issues on their land. Here he gives his top uses for drones on an arable farm. 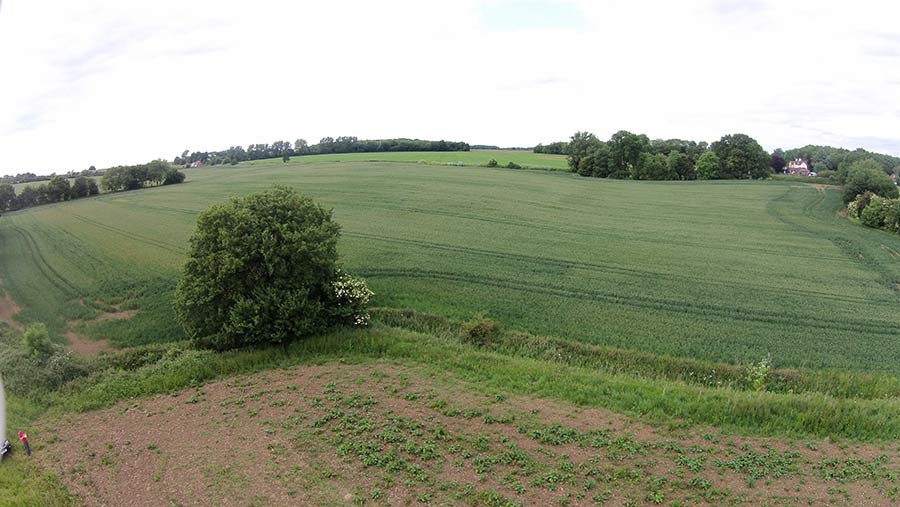 Although thinner areas of crop can be identified from the ground, it is far easier to see the whole picture from above, and whether there are any patterns to the compacted areas that would indicate their cause.

These two photographs taken seconds apart from different heights illustrate how a crop which appears to be relatively thick from the ground actually has several areas of poor establishment that could be addressed through cultivation.

The first photo was taken from a height of around 20m, while the second, at 120m, reveals compaction on heavy clay on the headland. 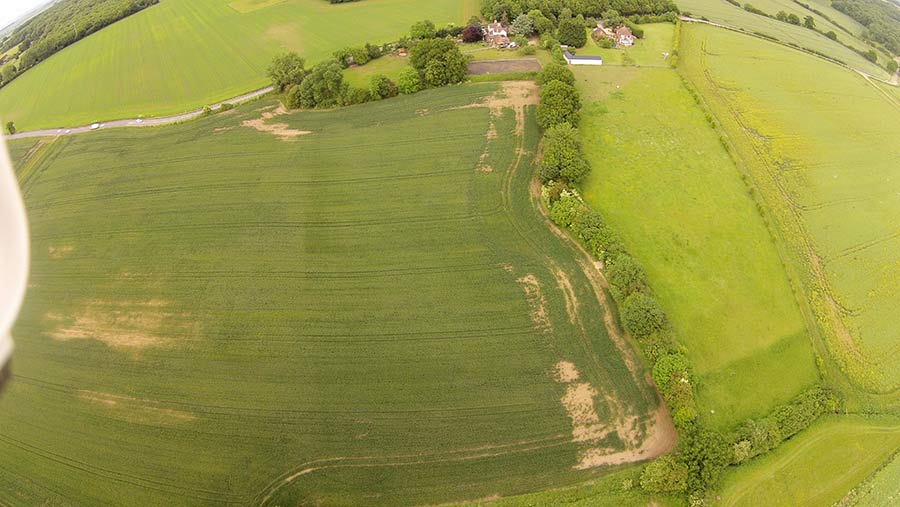 The thin area on the left of the picture shows up a need for lime, and in the centre, running from top to bottom is a darker line that shows where a ditch was piped and filled in the 1970s.

The best time to fly over a field to spot weeds such as blackgrass in a crop of winter wheat is in February to March. 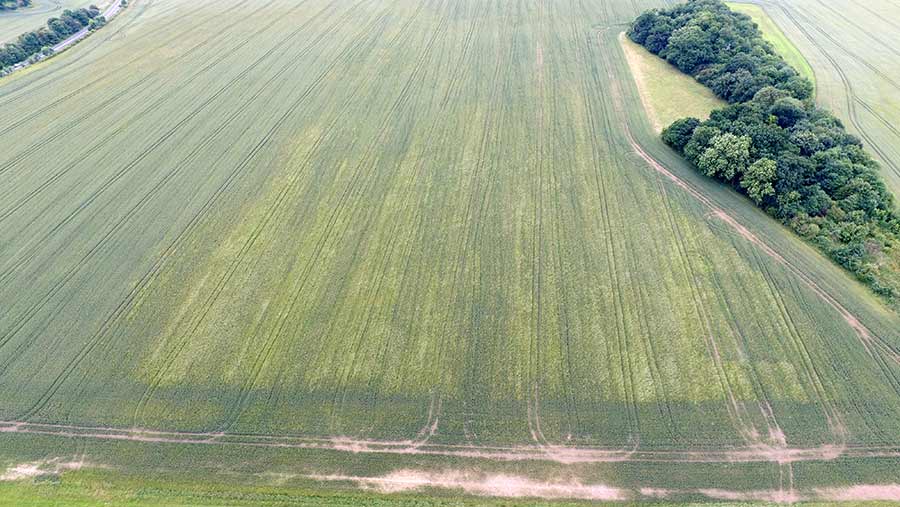 While this will not save the existing crop, it will allow measures to be taken for future years. Using the image above taken on his own farm, Mr Holtom mapped out the blackgrass area, sprayed it off and chopped it.

An aerial image may also indicate whether the blackgrass is the result of actions taken this year, or in a past one, depending on whether the weeds match up to the current tramlines.

Another question to ask is are there any clear divisions between weedy and non-weedy areas that would point to errors in spraying (such as misses) or tank-mixes.

Through the combination of a decent-quality aerial image and enough arable knowledge to be able to distinguish between cultivation marks and the faint tell-tale sign of a land drain, drones can be a useful tool in relocating a drainage system.

The best time to attempt this is during a dry period as the drain-line will be clearer.

As long as a camera is of relatively good quality then it is possible to distinguish variations in crop colour that would indicate nutrient deficiencies. However, farmers like Graham Potter in North Yorkshire can also use relatively simple software to process images.

He has used Drone Deploy on his own images to identify a 2ha area within a 10ha field of wheat that an inspection on the ground revealed to be suffering from a manganese deficiency.

The aerial image allowed him to create a variable map to treat just the affected area. This resulted in an instant saving, which he says paid for the annual subscription for the image processing software.

5. Providing a comprehensive overview of a new farm

A drone-flyover of a farm can be useful for providing a new farm manager or contractor with a comprehensive overview of a new farm and all its features, such as land drains.

For oilseed rape crops being grown in relatively built-up areas where gas bangers can prove problematic, a drone with a simple beeping alarm attached has proved a successful way of scaring off pigeons.

Aerial photographs can be a useful tool in proving land features exist quickly and easily to the RPA for BPS applications without the need for a farm inspection.

The same is true for insurance claims after events such as a crop fire or when machinery appears to be faulty. For example, sprayer or fertiliser spreader misses.