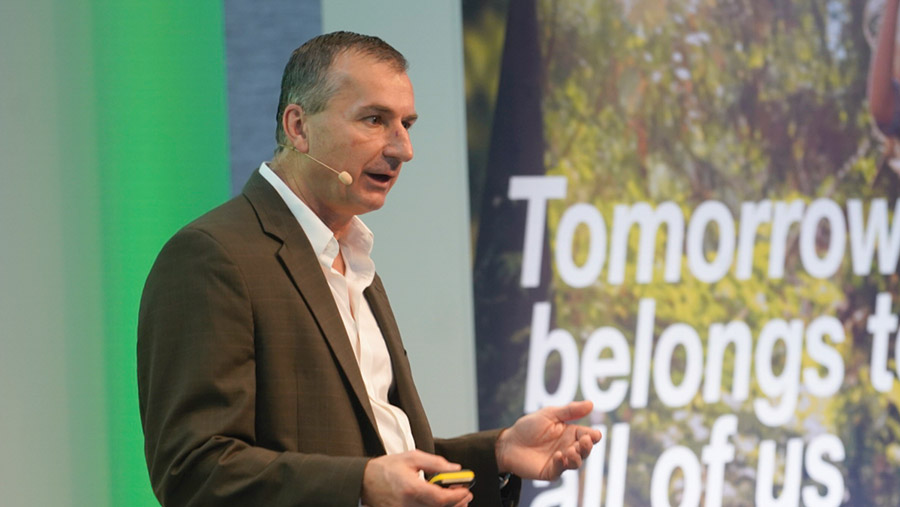 The paradox of feeding an estimated 9.7 billion people by 2050 without further damaging our environment and worsening climate change is one of the greatest challenges of our time.

With an extra 2.2 billion mouths to feed, farmers will need to produce an estimated 50% more food in the same land area, while tackling extreme weather and reducing greenhouse gas emissions to net zero.

One year after its full integration of the Monsanto business, Bayer CropScience gave a window into the transformational changes needed to help growers meet this challenge by farming more sustainably.

But Mr Condon said Bayer would defend the 40-year safety record of glyphosate in the courts amid rising concern among consumers over pesticide use.

“I think it is something that we’re very clearly confident will ultimately be solved, and we took key note of the fact that EPA [US Environmental Protection Agency] has clarified that [it won’t accept labels with] a cancer warning on Roundup in the US, because that would be fraudulent for consumers because of the lack of scientific consensus,” he told conference delegates.

Under the theme “Tomorrow belongs to all of us”, the event gathered farmers, academics, leading global industry experts and other stakeholders from about 40 countries for two days of dialogue on issues and opportunities facing the industry.

Topics included the need to find a balance between production of food and preservation of our planet; consumer demands to have a healthy diet with no negative impact on the environment; and the importance of crop protection tools for sustainable agriculture.

Some 7,300 scientists are working in more than 35 R&D sites and more than 175 breeding stations to deliver innovation.

Bayer has also made a commitment by 2030 to reduce the environmental impact of crop protection by 30%, reduce field greenhouse gases emissions by 30% and empower 100 million smallholder farmers in developing countries around the world.

“By combining agricultural innovation with a business model that has sustainability at its core, we can, in line with our purpose, contribute to a truly better life”, said Mr Condon in his keynote presentation.

According to Bayer, weed control is “the single biggest challenge growers face”.

That’s why it recently announced a €5bn (£4.54bn) investment over the next decade to develop weed control alternatives to glyphosate, including herbicides with new modes of action, mechanical, laser and thermal weeding.

Mr Condon said diversity was behind the funding commitment.

“For crop protection, that means rotating active ingredients,” he explained.

“If you constantly use the same product again and again, you are going to get resistance, and the product at some stage is no longer effective.”

Data science and innovative digital tools will empower farmers to make better decisions about how to grow crops, Bayer says.

Mr Condon and Bob Reiter, head of research and development, highlighted some of the new Bayer products and innovations in the pipeline to enable farmers to use less resources such as water, land, inputs and energy, but achieve better yields.

In the US, Bayer is piloting a pricing model that shares risks with its farmers.

The outcome-based pricing system guarantees farmers a yield or outcome from crop varieties or inputs.

Conversely, if they surpass it, they pay more and share some of the profits with Bayer.

A launch date for the new pricing system has not been revealed.

Dr Reiter said drone technology is “still in its infancy”, but already they are being used to accurately spray pesticides on fields in China.

DNA analysis and genomic information is being used in breeding programmes in unprecedented ways, he added.

Mr Condon said breeders would develop both genetically modified (GM) and non-GM varieties that are less likely to suffer from lodging, green snap and wind damage – all of which can impact yields.

Bayer is testing a short-stature corn hybrid variety in Mexico this year, with plans to launch it in North America later.

But the crops won’t be introduced in the EU until at least the mid 2020s.

“My belief is this is going to be a blockbuster. It’s very exciting and very promising technology,” said Dr Reiter.

“But there is still lots of work to do.”

But Rob Sharkey, a maize and soya bean farmer from Illnois, told the conference he had mixed experiences growing short varieties bred by competitors.

He said strong stalks left in the field after harvest often required tillage.

A core part of Bayer’s strategy is leveraging innovation from the outside.

Bayer announced that it had finalised an agreement with biopharmaceutical research company Arvinas to create a joint venture – newly named Oerth Bio (pronounced “Earth”) – and explore how molecular-degrading proteins found in plants and animals can protect crops against threatening pests and diseases.

Derived from an olive oil byproduct, the product is available to use in the UK for the control of aphids, whitefly and spider mites on a range of crops.

“Ultimately, I believe these will be used primarily as a complementary component to chemistry, maybe using it early in the lifetime of a plant and then use the biological later as a one-two system to maintain the health of their crop and deliver what societies wants in terms of the food that we eat,” said Dr Reiter.

US farmer Sam Eathington (pictured below) says digital tools are transforming the way he farms and helping him to get the most out of every acre. 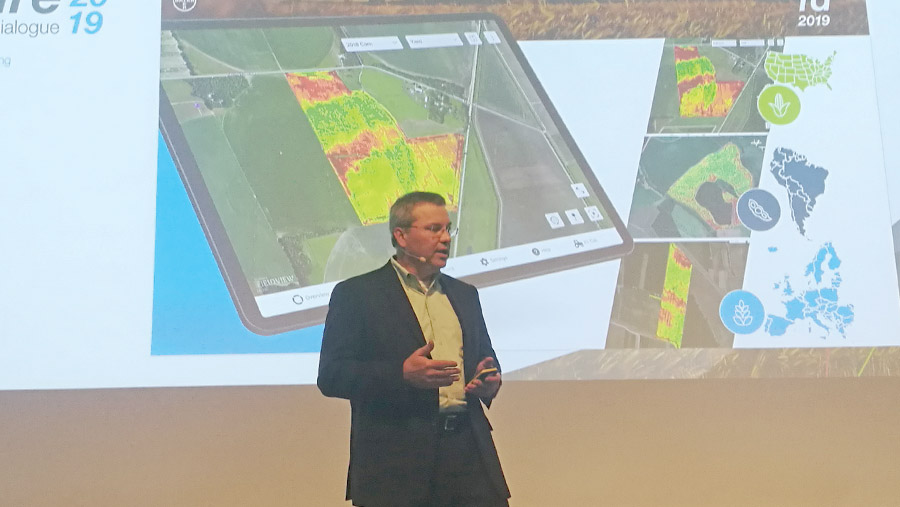 Mr Eathington, an eight-generation farmer from Illnois and chief science officer of Bayer subsidiary The Climate Corporation, says Bayer’s Climate FieldView platform is providing him with data-driven insights to sustainably improve his productivity.

The digital tool monitors progress as you pass through the field, generating recommendations for nitrogen and fertiliser rates to optimise crop productivity.

FieldView Drive connects to a tractor or combine diagnostic port and uses Bluetooth technology to wirelessly map a farmer’s data on to an iPad.