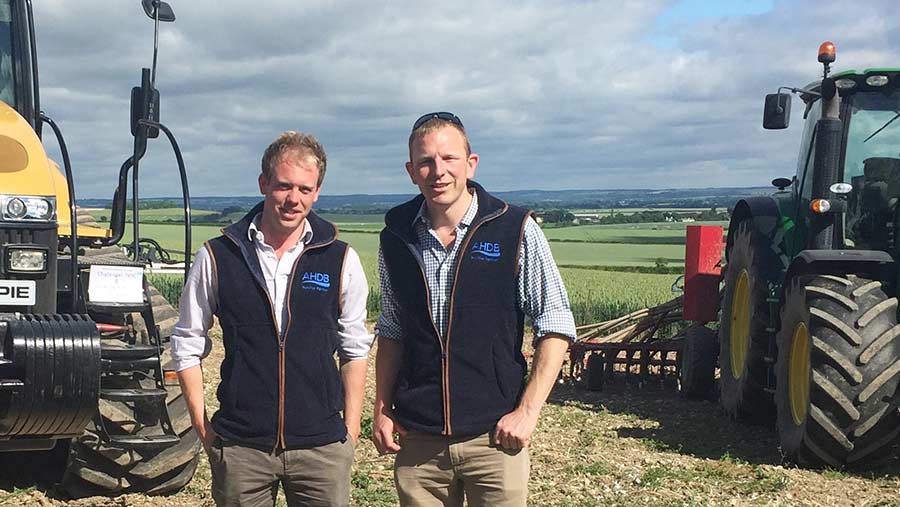 Tom Mead and David Hurst operate vastly different-sized farms although they both face the same challenges of trimming fixed costs and preparing for a post-Brexit landscape.

As well as farm size they also differ in machinery policy, use of environmental schemes and adding value with premiums. While one uses family labour only, the other employs five full-time staff.

However, common to the two farms are light chalky soils, grassweed issues, local geography and having the right mindset to take advantage of any opportunities that arise.

Mr Mead, of MS Mead & Sons, and Mr Hurst, arable manager at Law Farming, will be sharing the Monitor Farm role in Cambridgeshire for the next three years, pooling their resources to provide a platform for farmer-to-farmer learning.

See also: Why a Sussex farmer is changing his crop rotation

For Mr Mead, who farms 383ha in partnership with his father, there is a need for flexibility as he divides his time between day-to-day farming and diversification activities, which include a barn conversion and two small campsites.

With a mixture of owned, tenanted and contract-farmed land across five separate holdings, he has an average field size of 10.5ha, making it difficult to achieve high work rates.

His rotation is based on two cereals followed by a break crop – the choice of which is between sugar beet, peas, winter beans and oilseed rape. Winter oats have also worked well, with their low growing costs and high demand giving him a good margin.

“Any idea of a fixed rotation went out of the window some time ago,” he says. “The choice of break crop depends on the year, the site and any weed burden.”

On that basis, he is trying hybrid winter barley this year, to see whether it can help reduce blackgrass numbers and limit weed seed return.

Cultivations are flexible, with ploughing making way for minimal tillage wherever possible, to help with blackgrass control and keep costs down. Sewage sludge has been used for the past 10 years, bringing benefits to soil structure and improving moisture retention.

“It has helped to improve crop establishment, which can be variable on these chalky soils,” he says.

Both of his tractors are ex-demonstrators, and he plans to keep them until they have 8,000 hours on the clock. His Berthoud sprayer was bought second-hand and is used for all spraying and liquid nitrogen applications.

“With only my father and me operating our machinery, we can keep key items for longer without adding to our risk.” he says.

Agri-environment schemes have not been taken up so far, but Mr Mead is keen to look at how they could be used on less productive areas and plans to apply for Countryside Stewardship next year.

He is also assessing supply chain links for any premium-earning potential and is interested in working collaboratively to bring in the specialist skills required for successful diversifications.

Mr Hurst’s focus is on the arable production at Law Farming, a 1,821ha mixed farming business well-known for hosting the Cereals event every other year.

Wherever possible, high-value crops are grown for seed and human consumption, with good use being made of agri-environment schemes, while there is also a 1,800 breeding ewe flock.

With free-draining chalky soils, yields from the 10 different crop species grown in most years are dependent on moisture.

“Ours soils have advantages in that they are easy to work and difficult to compact, but they are also very hungry and prone to drought,” he says.

Ever since flea beetle problems put an end to oilseed rape production, rye has become a major crop, with 300ha being grown. Well suited to the lightest soils, it is grown for seed and milling, on contract to Ryvita.

The sugar beet area has also increased and accounts for one seventh of the farm’s cropping, something that Mr Hurst will be keeping under review now that the neonicotinoid seed treatments are banned.

“Our five-year average yield is 85.6t/ha. It’s hard to imagine that it will remain at that level if virus yellows has an impact,” he says.

His rotation is both complex and flexible, with gross margin, blackgrass populations and soil type all having a bearing.

Sugar beet and spring crops are moved around the farms to help with blackgrass control, while peas are being grown for the first time in a number of years.

“Another consideration is whether the crop choice will work with stubble turnips and grazing sheep, which are an integral part of our system,” he says.

The machinery policy has been revamped recently, with one 36m Horsch PT280 sprayer replacing two trailed machines, and a Cat Challenger 765C being chosen as the prime mover.

“Both of these are on contract hire. We now have all-singing, all-dancing machines that are more versatile and reliable than before. The changes have also allowed us to manage with three men,” he says.

“Everything is included in that. The sprayer covers 12,000ha each year and is also used for liquid fertiliser. Our system has been simplified and streamlined, with downtime being virtually eliminated,” he says.

The key challenges for both businesses have been identified as follows:

These, along with other topics, will be discussed at the Duxford Monitor Farm meetings, which start in November 2018.