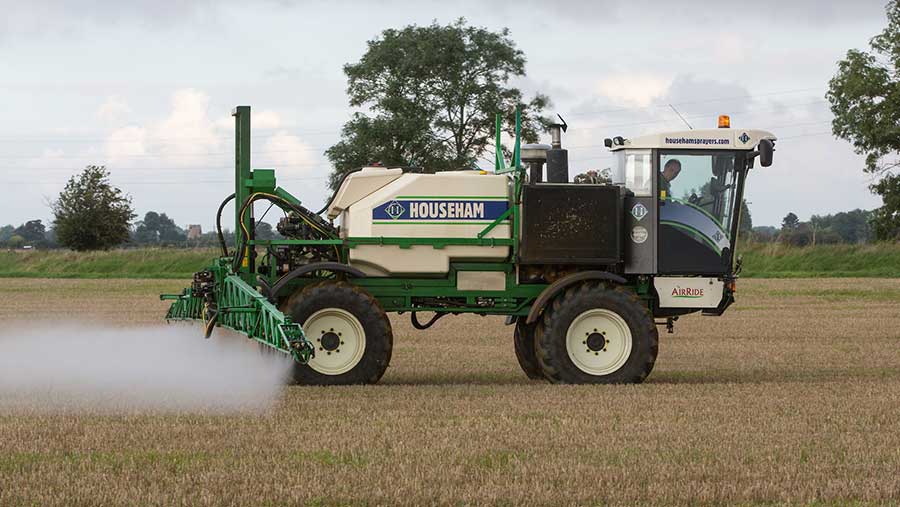 The lobby pushing for a pre-harvest ban on glyphosate is filled with hypocrisy and driven by an ideological hatred of pesticides, according to NFU vice-president, Guy Smith.

Public fear around the safety of the herbicide was manufactured by the same campaign groups pushing for its ban, he added.

In a debate at the Cereals event called “Should pre-harvest use of glyphosate be banned”, Mr Smith said the main evidence in favour of a ban was based on information from the International Agency for Research on Cancer (IARC).

“IARC has looked at nearly 1,000 substances in the past few years and found 992 are possibly carcinogenic, including hot water and processed meat,” he said.

The IARC classifies processed meat as a class one carcinogen, whereas glyphosate is deemed a class two, which makes sausages more dangerous than the herbicide, said Mr Smith.

He added the European Chemicals Agency, the European Food Safety Authority and the main health authorities from Canada, the US, New Zealand and Australia have all given the use of glyphosate pre-harvest a clean bill of health.

“There is no appetite anywhere else in the world to ban glyphosate – it’s only in the court of public opinion the idea there is a health issue with glyphosate has any resonance. To be frank, it has been whipped up with fear and unscientific arguments.”

But Nick Mole from the Pesticide Action Network (PAC) argued a ban was inevitable and a planned phasing out of the use of glyphosates was the most sensible course of action for farmers.

“Over the past 20 years the overall use of glyphosate has increased in terms of weight by 600%. Stopping its particular use should be a matter of some urgency.”

Mr Mole questioned whether glyphosate really did anything at all – citing an AHDB trial from 2008 that showed there was little impact when using glyphosate on a crop in a dry season on the absence of weeds.

He added: “There have been increasing residues found in wheat, flour and bread products.”

But this was contested by Sean Sparling, agronomist at the Association of Independent Crop Consultants.

Mr Sparling said he would have to eat 275 loaves of bread a day for life to ingest just 1% of a dose of glyphosate residue that is considered dangerous.

“This argument about residue in grain is a complete irrelevance – we are dealing with a safe product which we are using for a very good reason.

“We need to understand that glyphosate is preserving UK agriculture at the moment.”

The NFU is demanding evidence-based decisions on plant protection products as three major EU dossiers are expected to be concluded within the next six months.

These include the definition of endocrine disruptors, a proposal to ban all neonicotinoid seed treatments and the reauthorisation of glyphosate.

Speaking at Cereals 2017, NFU vice-president Guy Smith said: “This year looks like being a watershed year for classical chemistry for arable farms.

“A poor decision on endocrine disruptor definition could see an end to the availability of around 26 active ingredients.”

Farmers and growers are being urged to explain the vital role neonicotinoids play on farm to their MPs and MEPs, and via social media, to highlight the impact a proposed ban would have on UK farming.