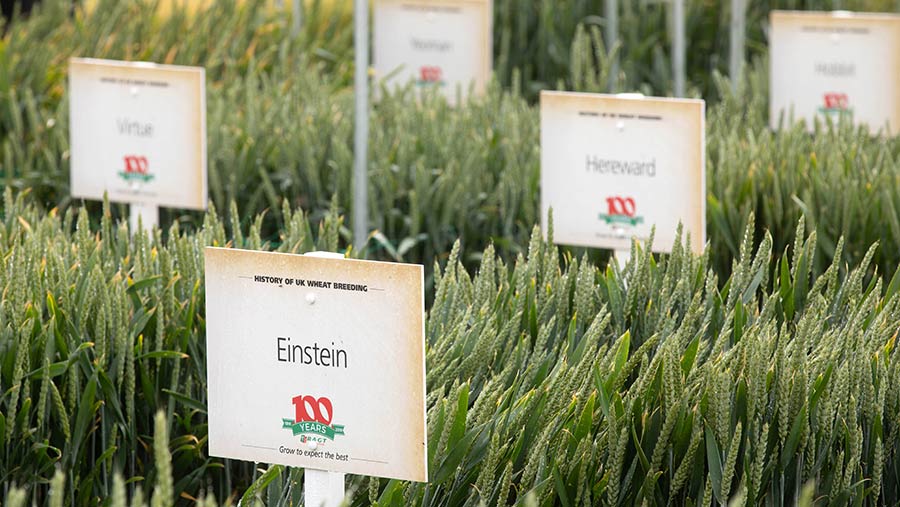 Cereal and oilseed rape growers will see more disease-resistant varieties and more effective pesticides next season to cope with the loss of active ingredients and a squeeze on profits.

Wheat varieties with improved resistance to septoria and barleys with tolerance to a key virus-spread disease were all on show at at the 2019 Cereals event in Lincolnshire.

New cereal fungicides with better efficacy against disease are also expected to be available next spring, while a new oilseed rape herbicide could replace two sprays this autumn.

These were some of the bright spots at the arable farming event at Boothby Graffoe, just south of Lincoln, in a week when the area saw three months of rain fall in a week.

With a key fungicide chlorothalonil set to be banned and another epoxiconazole likely to meet the same fate, the focus was on improved varieties and fungicides.

Plant breeders KWS had two winter wheat varieties on show with good resistance against wheat’s most damaging disease, septoria. They are the Group 2 milling variety Extase and Group 3 biscuitmaker Firefly.

“The level of chemical costs for growers could be cheaper with Extase and Firefly, while giving growers extra flexibility on spray timings,” said group sales and cereals manger Will Compson.

Extase has the highest septoria resistance rating on the AHDB winter wheat Recommended List at 8.1, while Firefly has a 7 rating (on a 1-9 scale where 1 is susceptible and 9 offers good resistance).

Growers have been snapping up Extase seed, which is now sold out and is set to take 3.5% of the commercial seed market, while Firefly is close to selling out and could grab up to 4.5%.

On the fungicide front, agrochemical and seeds group Corteva is set to have its new fungicide, Inatreq, available next spring, which has a different mode of action to other fungicides and can therefore help combat resistance.

Adrian Gough, the company’s UK and Ireland head, said the product is expected to be approved later this year, and he is “hopeful it will be available for next season”.

To strengthen the armoury against septoria, a new azole fungicide, Revysol, from BASF, is also expected to be available next season, with good activity against the disease.

Bill Clark, technical director of crop consultant Niab, said the new fungicide is very effective against septoria, and as good as epoxiconazole was when it was first launched and before azoles started to lose their efficacy.

On the winter barley front, varieties with tolerance against the aphid-spread barley yellow dwarf virus (BYDV) will be available this autumn. This disease can cause yield losses of up to 30% in the UK, and has been known to wipe out crops in France.

These developments come just as growers will be drilling cereal crops this autumn without neonicotinoid seed treatments such as Deter (clothanidin) – which are now banned.

KWS has its six-row conventional variety, Amistar, on show. It does get infected with BYDV, but there are no symptoms and there is only a small yield penalty. There is enough seed available to drill 3% of the commercial seed market this autumn.

Plant breeder Limagrain had another six-row conventional variety Rafaela on show, which Matt Shand, the group’s UK arable sales manager, says will be useful in BYDV hotspots, such as coastal areas, and for early-drilled crops. There is enough seed for 0.5% of the market.

While some seed dressing are banned, Bayer is launching two new biostimulant seed treatments for this autumn to help boost yields by 3%, as they improve nutrient and water uptake through better rooting.

The first of the biostimulants, JumpStart WT, improves phosphate availability to wheat plants, while the second, ProStablish WT, helps the roots transfer nutrients into the plants.

Syngenta, mindful of the trend towards later cereal drilling, was emphasising the benefits of its Vibrance Duo (fludioxonil + sedaxane) seed dressing to encourage better rooting and faster emergence. It also showcased and its BYVD Assist mobile app, set to aid better timing of insecticides against virus-carrying aphids.

“We are looking at solutions for farmers, as they are faced by the loss of chemistry,” said the group’s UK head, Gary Mills-Thomas.

On the oilseed rape front, growers could save a herbicide spray this autumn by using a new post-emergence product that can cut the need for a pre-emergence spray.

Corteva is launching the herbicide, which can do the job of a pre- and early post-emergence spray combined, and so take some of the risks out of growing oilseed rape.

John Sellars, the group’s product manager, says the new herbicide, called Belkar, contains Arylex – as used in cereal herbicides Pixxaro and Zypar – formulated with picloram, and can be used over a wide spray window.

Many oilseed rape crops were ripped up last autumn due to drought and cabbage stem flea beetle damage, so the cost of any pre-emergence herbicides applied was wasted.

The new product was approved for use last July and will be widely available this autumn. It can be applied from 1 September to the end of December.

The group says it gives particularly good control of weeds such as cranesbill, cleavers, shepherd’s purse, poppy and fumitory.