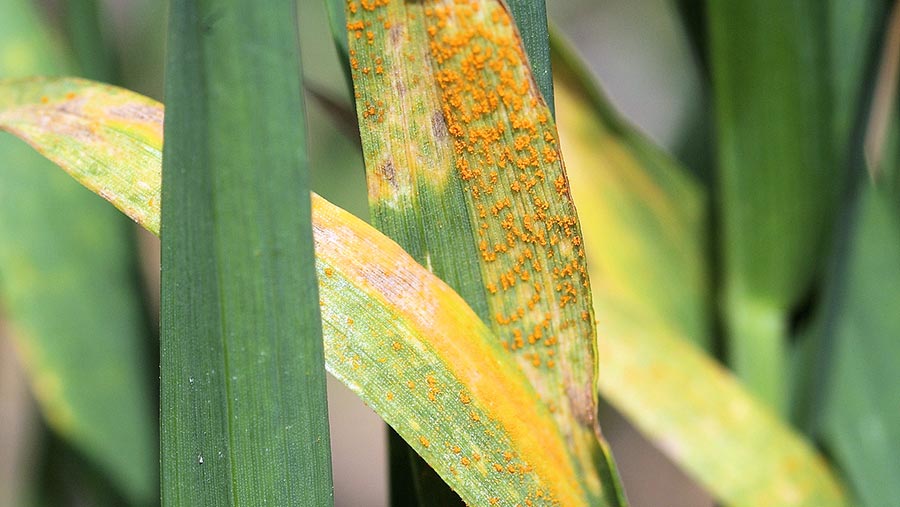 Within five years, farmers will be using technology to continuously monitor disease levels in crops, with the data helping to tailor their fungicides according to the risk.

The problem with many diseases such as septoria is that by the time agronomists and farmers see any signs of infection in leaves, it is often too late and yield potential has already started to fall.

The ability to measure the level of latent disease (infection without visual signs) would allow farmers to better target their fungicide spend, says Bayer cereal fungicide campaign manager Will Charlton.

The big agchem company has spent the past few years helping to develop technology to quantify disease, initially as a research tool in its wheat fungicide trials.

After seeing the potential benefits of being able to measure disease levels, the company took part in a three-year Innovate UK project with the University of Hertfordshire, Fera and specialist diagnostic equipment manufacturer Optisense.

Some of the spore trap technology is getting close to commercialisation with trials planned for next year. Farmers Weekly looks at three different technologies.

Bayer’s use of technology started with quantitative PCR, which is a lab-based technique that measures the amount of disease DNA present in a leaf sample.

The technology is based on the polymerase chain reaction (PCR) process, which effectively bulks up DNA to levels that can be detected by a machine. It can detect DNA from a specific disease such as septoria tritici.

Bayer’s commercial technical manager for the South-West, Rosalind Martin, says it can even be used to detect specific strains, such as those with fungicide-resistant mutations.

One characteristic of diseases like septoria is the latent period – the period between infection by a spore on the leaf and the visible appearance of symptoms.

During this period, the fungus grows within the plant tissue, while the leaf still looks healthy, she says. Septoria can remain in the latent phase for up to 28 days with no visible symptoms (see table).

However, fungicides tend to be effective in the early part of the latent period and having a precise measure of infection could help with decisions.

One drawback of the qPCR technique is that, being lab based, it takes time to get the results back.

For that reason Mr Charlton believes it will remain a research tool rather than being a management tool for farmers and agronomists, unless the process can be speeded up.

To make it more practical for farmers, the project has developed a mobile version offering a more rapid turnaround, giving results within 20 minutes. 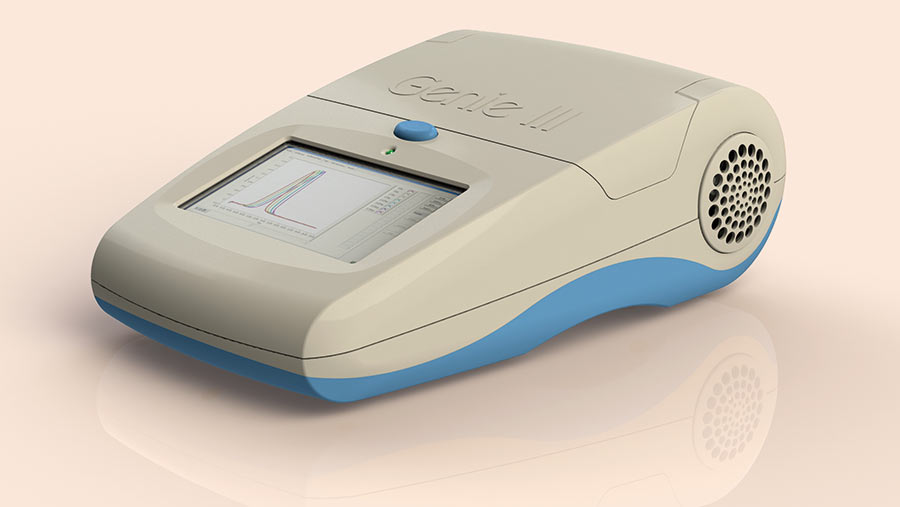 This means agronomists could get the results as they walk the fields.

Testing involves taking a leaf sample, processing it by shaking it in a tube containing a ball bearing and pipetting the fluid into a tube which is then read by a hand-held device.

The device uses loop-mediated isothermal amplification (Lamp) rather than PCR, meaning it is a much simpler process but at present does not give quantifiable results.

However, Mr Charlton says the plan is to develop a machine that can give a high, medium or low indication of disease.

Another hurdle is that being an optical-based measurement, the colour of the leaf is affecting readings which means the sample will need to be dried before testing.

The project partners are currently developing a way of doing this rapidly in the field.

The third and most interesting technology is an air suction spore trap called SporeSentry that takes in air and captures fungal spores, which are then analysed using the same Lamp method as in the mobile tester.

It is fully automated, capable of one week’s autonomous use and transmits its data via the 3G network.

However, high levels of airborne spores do not always translate into disease, unless the conditions are right for spore germination on the leaf, Mr Charlton explains.

Therefore, Fera has developed a model, taken from its Crop Monitor service, that overlays spore data and weather station data, and this is proving quite accurate at forecasting disease, he says. 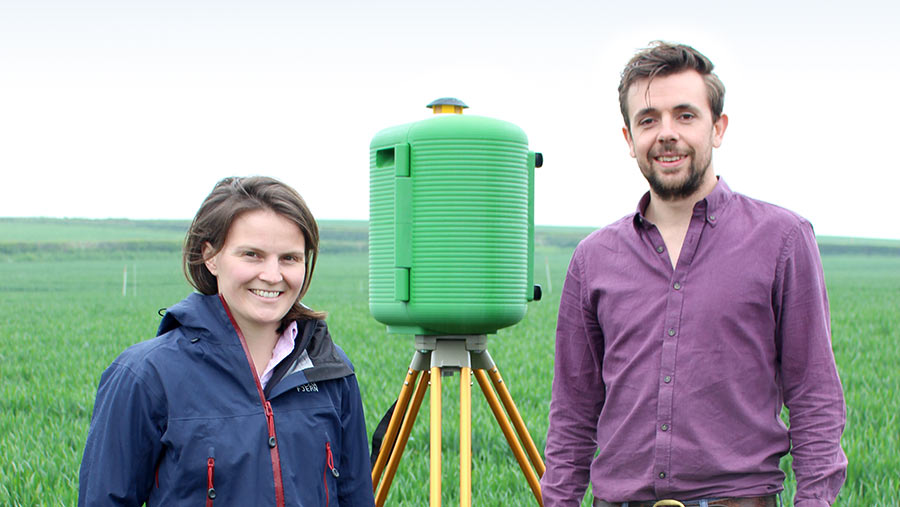 Roslind Martin and Will Charlton with the SporeSentry device

Mr Charlton explains that the technology is most beneficial when aimed at wind-borne diseases such as brown and yellow rust in wheat as well as early blight in potatoes and sclerotinia in oilseed rape.

The project has spent two years using a prototype to prove the principle works and it is now close to commercialisation.

“We now have a pre-production model which will be put through trials next year,” he says.

Mr Charlton points to one issue that still needs resolving: do you need one trap per field, or could one machine cover a much larger area.

“If the latter, we could see groups of farmers clubbing together and investing in a trap,” he points out.

Putting this technology into practice

Visual checks during the visit on 24 April showed that leaf 4 was clean for both varieties. 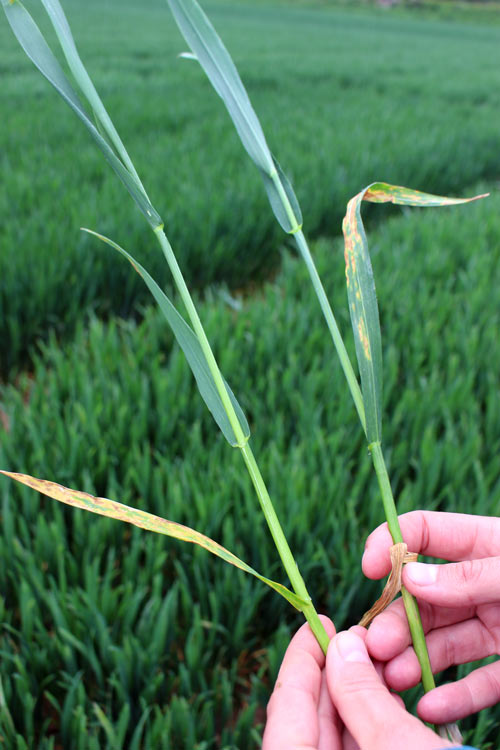 However, testing showed that there was much more latent septoria infection in the Elation than the Sundance (see graph), reflecting their differing Recommended List disease scores of 4.3 and 7.9, respectively.

Until now, Bayer has focused on testing leaf 2, as trials were assessing the curative performance of different T2 fungicides.

However, data from tests on leaf 4 could help with T1 fungicide decisions.

Mr Walsh believes this earlier testing for septoria is valuable in giving an idea of disease risk to leaf 3, letting him prioritise higher-risk farms and fields.

“Knowing the level of latent infection combined with weather information, we could tailor fungicides accordingly.”

He adds that looking at the figures (see graph), the Elation would be sprayed first. The Sundance could be left until after the Elation, and it might not even get an SDHI fungicide.

He also points out: “Growing varieties like Barrel may get a premium in some cases or the Elation that we have here, but with the lower rating for septoria, testing could help buy some management time.”

Testing also provides data to help back up fungicide recommendations where higher rates may be needed in high-risk fields or cutting back when pressure is low.

Rosalind Martin believes another benefit is with resistance management and it could help extend the life of fungicides by reducing their unnecessary use.

Of the three technologies, Mr Walsh is most excited by the spore trap and he sees this helping agronomists and growers target application timings.

“It enables you to pick which crops gets treatment first. With the system, we could walk the higher pressure fields/farms first.”

Working closely with customers, Mr Walsh gets involved in many aspects such as monitoring soils, farm budgeting and future farm strategies.

“Tools like the spore traps which are readily available 24/7 that can help us be more efficient with detailed agronomy packages will be key parts going forward.”