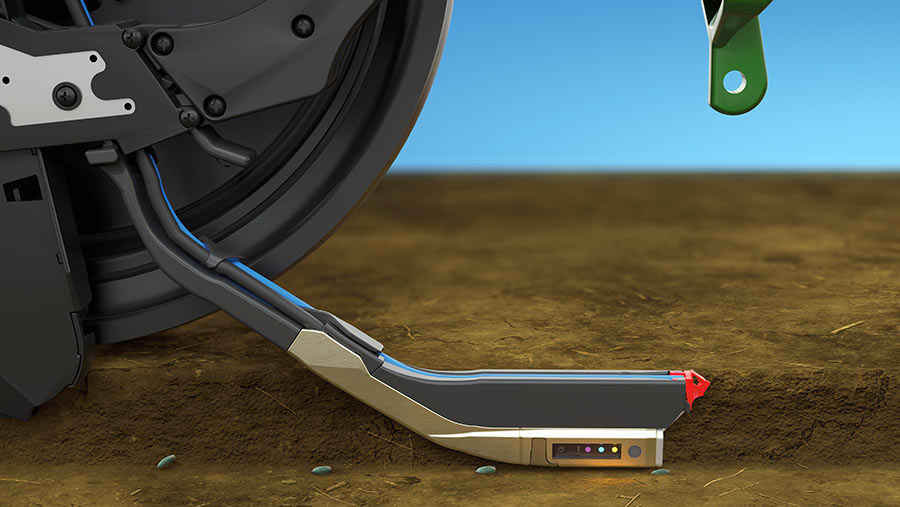 A clever gadget that provides planter operators with real-time soil data for on-the-fly variable-rate seed and fertiliser applications could soon feature on UK farms after a recent Agco acquisition.

Illinois-based Precision Planting has been providing tech solutions to North American farmers for more than a quarter of a century and was acquired by the machinery giant back in 2017.

This has opened more doors for some of its seeding technology, which primarily aims to improve the accuracy and efficiency of precision drills and boost crop establishment and yields.

Fendt – considered to be Agco’s “high-tech” brand – has already been assessing a number of Precision Planting’s offerings at its demo trial site near Wadenbrunn, Germany, since the acquisition.

One is DeltaForce, a retro-fit system that replaces mechanical downforce control on precision planters with a hydraulic cylinder.

Sensors are then used to pick up changes in soil conditions and coulter pressure is adjusted between 10kg and 250kg.

This reduces compaction by gauge wheels on light ground by backing off pressure and ensures seed is placed at the correct depth on heavier soils where a heavier hand is required to force it in.

More interestingly, Precision Planting’s SmartFirmer was also run in Ukraine and other parts of eastern Europe and looks set to make its debut in France and possibly Germany this spring.

The seed firmer can be fitted to any row crop planter that drills deeper than three-quarters of an inch.

As it presses seed into the seed trench, a sensor gives real-time measurement of soil moisture, temperature and trash levels around the seed.

Furthermore, it can sense organic matter levels and cation exchange capacity (CEC), which are both valuable indicators of soil productivity.

Organic matter and CEC are both characteristics that require sampling or an extra pass with a specialist machine to measure, with results used to retrospectively create maps for variable-rate seeding.

With SmartFirmers fitted on each seeding row, all soil-condition data is fed back to Precision Planting’s 20|20 monitor in the tractor cab.

Its unique feature is the ability to vary seed and solid or liquid fertiliser automatically in real-time when used in conjunction with the firm’s various individual row electronic metering systems.

Data for the future

All the data generated by the SmartFirmer can be saved and used for future applications and in the case of organic matter and CEC, as base layers for variable rate seeding and fertiliser plans without the need to call in a third-party sensor provider to map fields.

This could be especially useful for those regularly renting unfamiliar land or for contractors where they are less likely to invest in soil scanning ahead of planting.

At present, SmartFirmers are being used in a number of countries around the world, including US, Canada, Australia, parts of South America and more recently eastern Europe.

A “low-stick version” that could be better suited to wetter soils commonly found across northern Europe is available, but compatibility with the different drill setups used this side of the Atlantic is thought to be the biggest barrier to uptake.

SmartFirmer is currently only available as a retrofit product and is compatible with a range of John Deere, Kinze, Monosem and White planters for about US$475 (£365) per row, plus the cost of a 20|20 monitor and harnessing.