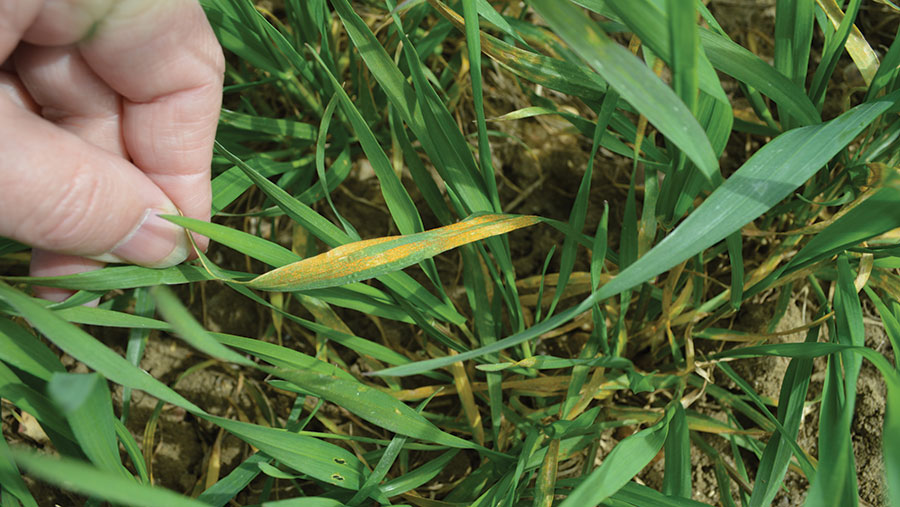 Wheat fungicide spray timings will be even more critical to hit this season as backward late-drilled crops will race through their growth stages once spring finally arrives.

Many wheat growers with poor, thin crops coming out of the winter will be tempted to cut back on fungicide costs, but one expert says growers should still try out a new product, even though it is set to be expensive.

“Growers should not believe all late-drilled crops will end up with sharply lower yields. We have seen later-drilled crops yielding 90-95% of earlier-drilled ones,” he says.

Mr Clark says there is a reduced septoria risk due to late sowings, but a wet spring could herald a disease epidemic, so new products such as the SDHI-azole combination Revystar from BASF could be very useful.

“Don’t be drawn into the self-fulfilling prophecy that late sowings mean low yields, which leads to reduced inputs and then actually results in low yields,” he says.

Indeed, north Lincolnshire grower Mark Stubbs drilled a wheat crop late on 4 November in 2018 and it yielded 16.3t/ha to take the top prize in the Adas-organised Yield Enhancement Network (YEN) competition in 2019.

Mr Clark says thin wheat crops this season can not afford to lose tillers and the lower leaves, such as leaf three, will be more important this season, as there will be more light penetrating through the thinner canopies.

Spot on with timings

Late-sown wheat crops will have fewer leaves, and any new leaves will emerge quicker than normal, so growers will need to be on the ball to get fungicide timings right.

Even in a relatively low-disease season like 2019, the average response to fungicides was 3.9t/ha, with half the varieties on the AHDB Recommended List seeing yield responses of more than 4t/ha.

Even Extase, which is the most unresponsive variety to fungicides because of its good resistance to septoria and yellow rust, showed a yield response of nearly 2t/ha, within a wide range of 0.5-3t/ha.

Mr Clark believes growers should only need to spend a thrifty £60/ha on fungicides for Extase, with one-third used at T1 and two-thirds at T2. No T0 is needed and a T3 should only be applied if required.

He suggests both treatments should be low doses of an SDHI-azole-chlorothalonil mix.

Extase scores a maximum 9 for yellow rust resistance on the Recommended List, and the second-highest score of 8.1 for septoria, just behind newcomer Theodore’s 8.2, on a 1-9 scale where 1 is susceptible and 9 shows good resistance.

Yellow rust is being seen in significant amounts in varieties such as Zyatt, Claire, Dunston and Graham this season, so these crops need to be treated with a low dose of an azole – such as  tebuconazole or epoxiconazole – as soon as possible.

Mr Clark believes T0 sprays, usually applied in the last week of March, will be less necessary this year, especially on late-drilled crops, but with plenty of chlorothalonil on farm, growers may be tempted to use this fungicide at T0.

The multisite chlorothalonil is set to be banned after mid-May, so many growers may be encouraged to use it at T0 as a protectant fungicide against septoria.

For this season, Mr Clark says the gap between T0 and T1 sprays will be very close – possibly two to three weeks rather than a more normal three to four weeks – as late-drilled crops race to catch up in the early spring.

His advice is to use an SDHI-azole combination at T1, usually applied in the last week of April, even on the most septoria-resistant varieties such as Extase and Theodore, as there is usually a yield response.

Growers have a use-up period for any stocks of chlorothalonil until 20 May 2020, which means it can be used in T0 and T1 winter wheat fungicide sprays, but its use in T2 sprays will be more uncertain, as some crops may not have reached the T2 stage by 20 May.

The T1 stage, when three-quarters of leaf three has emerged on the main stem, will be very tricky to identify this season, says Mr Clark, and dissection of wheat plants, although difficult, will be crucial.

Furthermore, the gap between T1 and T2, when the flag leaf is fully emerged in the second half of May, will also be very quick and this could be a positive for limiting fungicide costs.

This is because with wheat leaves emerging quickly this season, leaf two will be exposed for less time before the flat leaf emerges and the T2 spray is applied.

So as leaf two will be exposed to potential septoria for a shorter time this season, the T2 application should give better eradicant control.

Mr Clark rates the new azole Revysol as “outstanding” for its efficacy against septoria. He advises growers to use tis new chemistry, but still spend the same amount of money by using low rates.

“Revystar is better than the rest of the SDHI-azole mixes on septoria and so, even at a price premium, it is worth using. I would advise growers to try it, especially on the flag leaf,” he says.

The product’s maker, BASF, has not revealed details on pricing, but says there will be an “innovation premium”, which means it is likely to be more expensive than other SDHI–azole mixes. In addition, Revystar uses a lower dose of the SDHI than the group’s established SDHI-azole mix Adexar, so helping to protect the SDHI from resistance building up.

Looking at resistance concerns, Mr Clark emphasises that using different mode of actions – such as using an SDHI-azole-chorothalonil mix – is more important than alternating SDHIs or azoles through the season.

If you are losing chlorothalonil for next season, work out how much you would spend on this multisite and then spend the same amount on new chemistry, he suggests.

Products in the pipeline

For the future, there are new systemic fungicides – or those that travel through the green leaves to fight disease – for use against septoria which will expand a wheat grower’s armoury from just SDHIs and azoles.

Corteva had to delay until 2021 the launch of its Inatreq fungicide, which has a different site of action to other cereal fungicides such as SDHIs and azoles, and is classified as a quinone inside inhibitor (QiI) type of fungicide.

BASF has a new strobilurin, or quinone outside inhibitor (QoI), called Pavecto, with very good activity against septoria. It could be rolled out from 2022 onwards.

This opens up the possibility of growers having access to four different types of systemic fungicides for use against septoria.

In addition, Bayer and Syngenta have new, improved SDHI fungicides under development, which are likely to be available in the next few years.