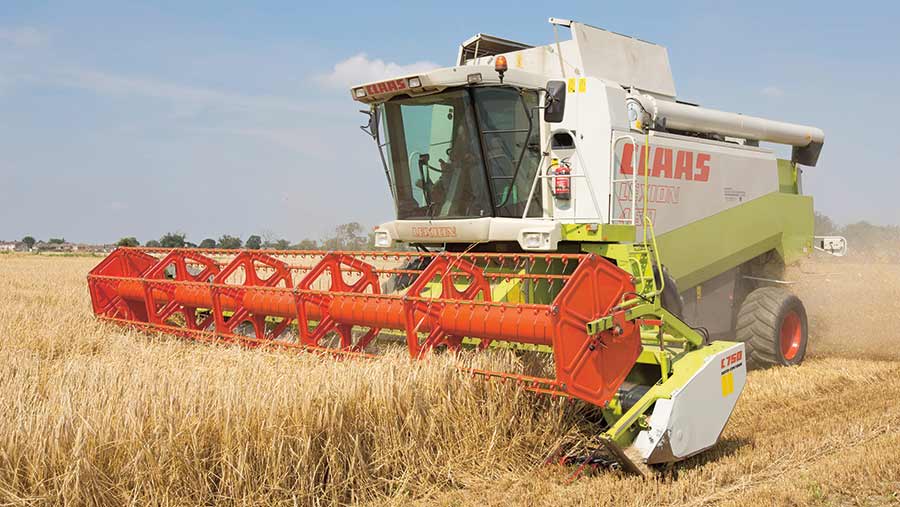 Rhynchosporium commune remains the most important disease of barley in the UK, particularly in wet and high humidity areas in the West and North of the UK.

However, in wet seasons it causes problems across the arable area. Yield can be decreased by up to 40% and grain quality significantly reduced.

What about its life cycle?

Rhynchosporium is polycyclic, so is capable of causing several infection cycles during the growing season.

It is a challenging disease due to its ability to spread in a number of ways. It first appears in winter barley during the autumn as infection foci caused by rain-splashed spores from infected trash, stubble and volunteers.

Research carried out at Scotland’s Rural College (SRUC) has shown that rhynchosporium is also seed-borne, with infected seed allowing the disease to develop inside fresh shoots and roots before expressing itself more evenly during January or February.

Visible symptoms are usually more significant at tillering, but wet summers can see infection splashed up the canopy and onto upper leaves and ears to infect grain.

In spring barley symptoms appear much later – typically after tillering – and in wet years spread to upper leaves.

Wind also plays a significant role in the spread of rhynchosporium. This route of infection is important where spring barley is planted adjacent to infected winter barley crops.

How can I identify the disease?

Rhynchosporium first appears as chlorotic, irregular or diamond-shaped lesions, typically around the base of leaves close to the stem. Left unchecked, it develops into blue-grey water-soaked lesions on leaves and leaf sheaths. 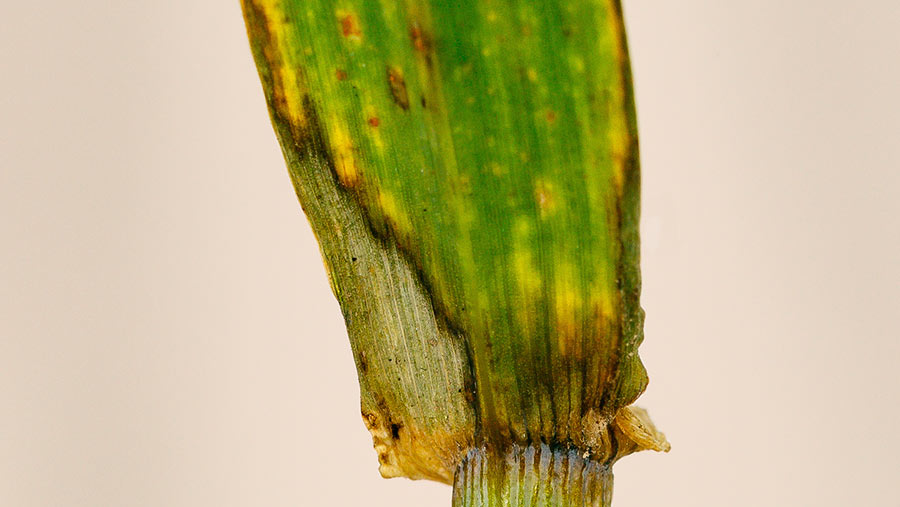 What are the risk factors?

As rhynchosporium is a trash-borne disease, tight rotations pose a significantly increased risk, as do min- or no-till establishment systems where crop residues remain on the soil surface.

In parts of the UK where multiple or continuous barley is grown, risk is at its highest.

SRUC’s Fiona Burnett says 2019 could be a high-risk year. Despite the recent winter being relatively dry, rhynchosporium will have favoured the predominantly mild conditions and dense crop stands experienced by much of the UK.

How can risk be managed?

Varietal resistance to rhynchosporium has been improving in winter and spring varieties and can be used to manage the disease.

Spring barley variety choice is market driven and previously dominant varieties were weak on rhynchosporium. However, varieties such as Laurette (6) are now taking over and offer more robust resistance.

Which fungicides are effective?

As with any pathogen, the development of resistance to fungicides is a concern. Rhynchosporium has been eroding the efficacy of the azole group for some time, with older actives such as propiconazole and tebuconazole now much less effective.

Top azole prothioconazole is holding up remarkably well, according to Prof Burnett (see “Fungicide activity against rhynchosporium – key options”), despite heavy use seeing it applied to more than  80% of barley crops each year.

Epoxiconazole is slightly behind on efficacy when used alone.

Strobilurins have seen a slight reduction in efficacy, but remain an effective active group for controlling rhynchosporium.

Along with SDHIs and multisites such as chlorothalonil, cyprodinil and spiroxamine, there are a broad selection of effective products that can be used in balanced mixes to control the disease, helping to slow the development of resistance.

How do I build a fungicide programme for rhynchosporium?

Fiona Burnett says it is important to focus on tackling rhynchosporium early. In winter barley, that is at growth stage 30/31 (first node detectable) and late tillering or GS30 in spring barley.

In winter barley crops an early clean-up spray at T0 – three weeks or so before the main T1 spray – can help to eradicate overwintered disease and improve disease management at T1.

This should be on a case-by-case basis and provides a chance to use alternative chemistry to that applied at main timings – for example, cyprodinil or spiroxamine.

Prothioconazole should be the foundation of T1 applications and other actives added in, depending on pressure and other disease targets present.

There is little to choose between strobilurins and SDHIs on rhynchosporium when used in combination with prothioconazole.

However, SDHIs are broader-spectrum and more appropriate where diseases such as mildew, rust and net blotch are also a concern.

For T2 at about GS45-49, it is important to walk crops and consider recent weather to assess rhynchosporium risk. Robust action should be taken where risk is high, or the disease was not stamped out early.

For resistance management, growers should consider using alternative actives to those used at T1.

If an SDHI-azole combination was used early, consider an azole-strobilurin at T2. Multisite chlorothalonil should also feature, which will protect against rhynchosporium and ramularia.

For Yorkshire-based independent agronomist Patrick Stephenson, it important to consider how rhynchosporium risk can be reduced across the rotation.

He advises where a problem develops in the crop, stamp it out as early as possible to avoid significant yield penalties.

“Post-harvest barley volunteers will hold inoculum nicely, so growers need to be aware of any potential green bridge problems and keep stubbles clean where possible.”

A thick, lush canopy coming through the winter will create an ideal microclimate for rhynchosporium development, so delaying nitrogen can help reduce this increased risk.

For control strategy, his focus is on a nine-week period between late tillering and awns emerging. To maintain protection throughout, a three-spray fungicide programme is typically required.

Mr Stephenson advises his growers to correlate fungicide applications with plant growth regulator (PGR) timings at late tillering to GS30 and GS33, and then follow up with a final spray as awns emerge from GS45-49.

“People tend to have the same mindset as wheat, but it’s better to place focus on early disease control timing in barley, rather than late,” he adds.

In a typical season, spend would be split 40-40-20 across the three sprays.

Mr Stephenson favours a prothioconazole base, with strobilurins such as pyraclastrobin and SDHIs bixafen, fluxapyroxad and benzovindiflupyr providing additional activity on rhynchosporium and other diseases.

“It often boils down to cost and pre-formulated mixes tend to offer the better value over mixing straights. Also, be aware of cut-off dates of some SDHI products for later sprays.”

For spring barley, it is simpler, with a 50-50 split of an azole-SDHI combination at two timings (GS30 and GS45) using about 40% less dose than in winter barley.

Mr Stephenson adds that chlorothalonil is an important part of winter and spring programmes, particularly at later timings, for ramularia protection.