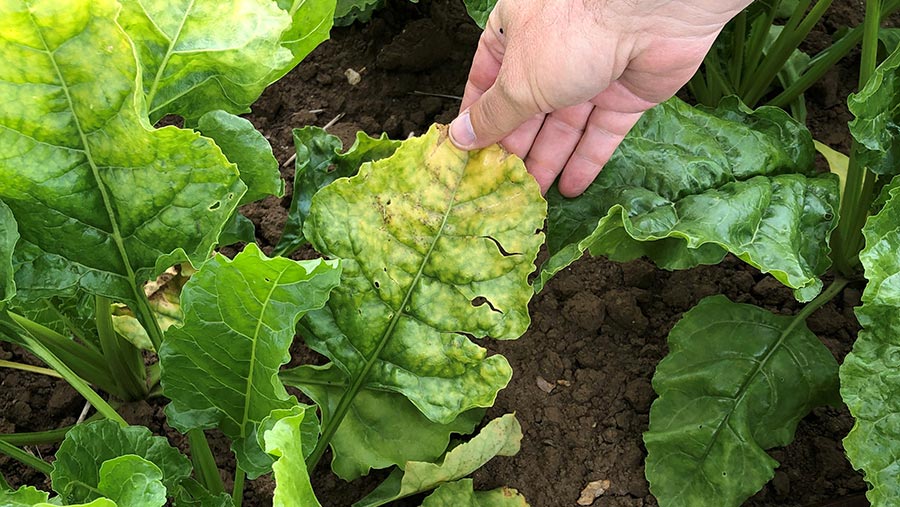 Sugar beet growers are being urged to remain vigilant amid the first reports of a forgotten disease, with monitoring highlighting the much higher aphid pressure in fields this summer.

Virus yellows is carried by peach potato aphids and, up to last year, had been successfully managed with neonicotinoid seed treatments.

This season is the first since the seed dressings were banned.

Trapping by the British Beet Research Organisation (BBRO) has caught as many as 40,000 peach potato aphids across 63 sites, highlighting the heightened virus yellows threat this season.

See also: How to avoid losses from cercospora beet disease

That count compares with just 2,500 aphids caught in the same period last year, when the crop could still be grown using the neonicotinoid seed treatments and the weather had provided some natural aphid control.

Intense surveillance, which started at the beginning of May, will continue for a couple more weeks, revealed Mark Stevens at the BBRO’s recent BeetField 19 event.

He stressed the importance of monitoring crops so that foliar insecticides are only used when thresholds have been reached.

“It’s been a busy year,” he said. “Aphid numbers have been very high, following the very mild winter and kind conditions in the spring – a perfect storm for the pest.

“That’s in marked contrast to last year, when the ‘Beast from the East’ helped to keep aphid numbers down and delay their flight into beet crops.”

As well as counting aphid numbers from yellow water pan traps, the BBRO has used the Rothamsted Insect Survey data to help track numbers regionally, as well as diagnostics to determine whether the aphids are carrying the virus.

Of the aphids tested to date, only low numbers have been positive for virus yellows, Dr Stevens revealed.

“That’s in line with our expectations, although we do predict that base level will increase over the next few years.”

The first signs of virus yellows are being found in crops, he reported, but there are also other conditions that turn crops yellow and can cause confusion.

“Downy mildew has a similar effect initially and we are seeing more beet mosaic virus this year, which is probably as a result of the mild winter. So don’t always assume that virus yellows is the culprit.”

Secondary spread of virus yellows will start to show in crops in August and September, he said.

Where needed, spraying programmes should have begun when the one green wingless aphid per four plants threshold was reached.

“If programmes start too early, there’s risk that crops could be unprotected at a time when the aphids are still flying.”

As well as one application of Teppeki (flocanimid), growers have been able to use up to two applications Biscaya (thiacloprid) this year, thanks to an emergency 120-day authorisation.