A big farming group is trialling rapid disease detection tests to optimise its fungicide rates to control septoria, which, if successful, could be rolled out across all of its 16,000ha of winter wheat.

Septoria is wheat’s most damaging disease and can infect crops about three weeks before symptoms are seen in the field.

This is why Velcourt is using two tests to determine how much hidden disease is present in crops, and the best rate of fungicide to use.

Sam Tugwell, one of the group’s agronomists, is looking to take leaf samples from a range of wheat crops a few days before applying T2 flag-leaf sprays, so any latent infection can be detected in the laboratory and fungicide rates adjusted accordingly.

“We are looking to use the tests, side by side with variety resistance ratings, to optimise fungicide applications,” says Mr Tugwell.

The group is focusing its work on two tests – one from agrochemicals giant Bayer, and another from Microgenetics, called SwiftDetect. Both use rapid quantitative polymerase chain-reaction (qPCR) analysis to assess the amount of septoria DNA in the leaves tested.

This involved taking samples of leaf two and leaf three ahead of the flag-leaf spray application, sending them off to a laboratory and receiving the results on septoria levels in a few days.

“This has the potential to be a really good way to manage inputs and apply just the right amount of fungicide for the infection level,” he says.

Trials with the two tests across the group showed encouraging results last year, looking at both T1 and T2 timing, and this year Mr Tugwell’s work will be focusing largely on testing before the T2 spray.

His arable farming clients stretch across central England, including Northamptonshire, Derbyshire and Staffordshire, in a season where septoria has been at moderate levels and rust infections sporadic. 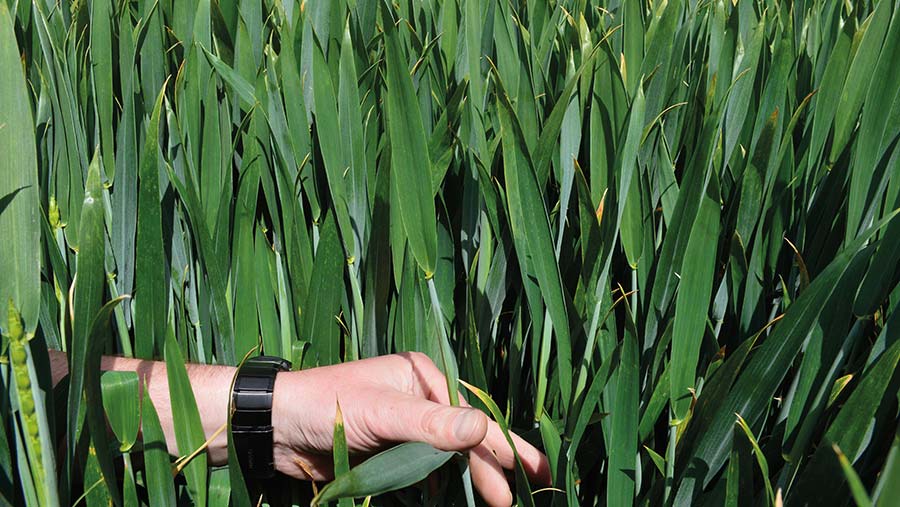 Many of his growers are using good rust-resistant winter wheat varieties, such as Extase and Graham, and so have missed out on an early T0 spray this year, which is often aimed at yellow rust.

T1s have been generally been Revystar or Ascra, and T2s are likely to be mostly Univoq.

Univoq contains a new site of action picolinamide called fenpicoxamid and an existing azole, prothioconazole, and is in its first full season of availability.

Bayer conducted more than 80,000 leaf tests in 2021, and says its rapid disease detection initiative, called CropCheck, gives an insight into what is happening inside plants, not just on the outside, and has helped many growers to identify latent disease before symptoms are visible.

The Bayer test is currently free for a limited number of uses.

As the disease can be latent for about three weeks before symptoms appear in the field, leaves are sampled from the field and sent to a laboratory for qPCR analysis.

This will determine how much septoria DNA is in the leaves, what level of fungicide is needed and even whether a multisite fungicide might be needed.

It was used by about 100 growers and agronomists, and now the group is working on other tests for other diseases.

The septoria test costs £70 a sample. Results arrive in 24 hours, giving an undetected, low, medium or high reading for the disease.

Nick Anderson, head of crop production technology at Velcourt, says its trial work has indicated the value of qPCR testing.

Being able to determine whether fungicides are being applied in a protectant situation or an eradicant situation has significant implications for product choice and rate,” he says.

However, he also points to challenges with how the technology can best be integrated into management.

The farming group is seeking to answer these questions through on-going trials work. “We have three separate trial protocols looking at each of these points this season.

This will help us understand the best way to use this technology to guide management decisions in our customer’s crops as part of an integrated approach to disease management,” he adds.