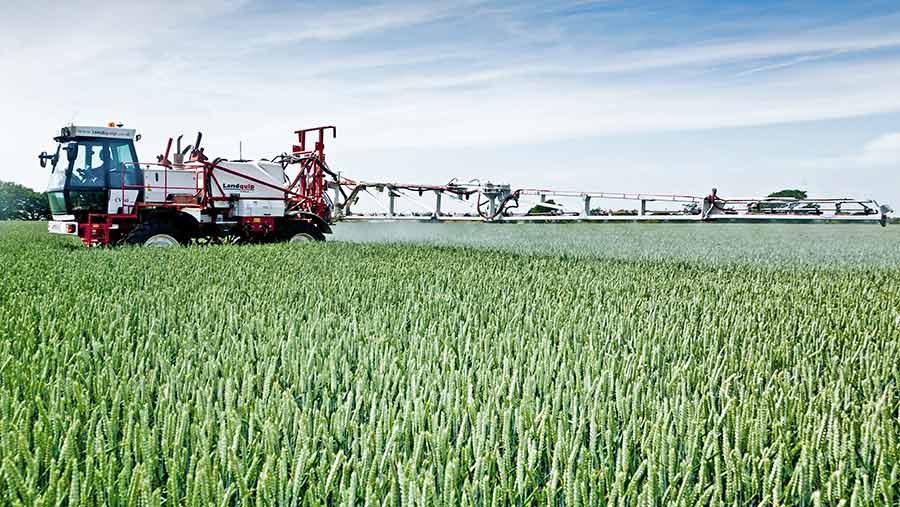 With rising incidence of fusarium ear blight and changes to mycotoxin legal limits on the horizon, experts are advising wheat growers to adopt a more water-tight, integrated approach to minimising the problems in future seasons.

Fera started recording incidence of Fusarium ear blight symptoms in 1991 and since that point, there have been three seasons of severe infection: in 1998, 2007 and 2012 (see graph 1).

While there have been fluctuations after each disease explosion, levels have never returned to pre-epidemic heights and each has represented a step change in risk to the yield and quality of UK wheat crops.

Of the Fusarium species, F culmorum has historically dominated UK populations, but over the past dozen years, F graminearum has come to the fore (see graph 2) and, worryingly, it is the most significant mycotoxin producer.

In addition, unlike F culmorum which is spread locally by rain splash, F graminearum completes its sexual phase on crop debris and produces air-borne spores capable of travelling greater distances.

The rising occurrence of ear disease and the shift to a more dominant mycotoxin-producing F graminearum began in the South-West and moved across the south coast and up the eastern seaboard to the East Midlands, around the Wash.

According to Harper Adams University expert Simon Edwards, a combination of factors is at play, with increasing maize production and a slight rise in temperatures favouring its proliferation.

In hotspots such as the East Midlands, although maize is now grown more widely, an increase in reduced or zero tillage establishment methods in an intensive cereal-growing area is also contributing. 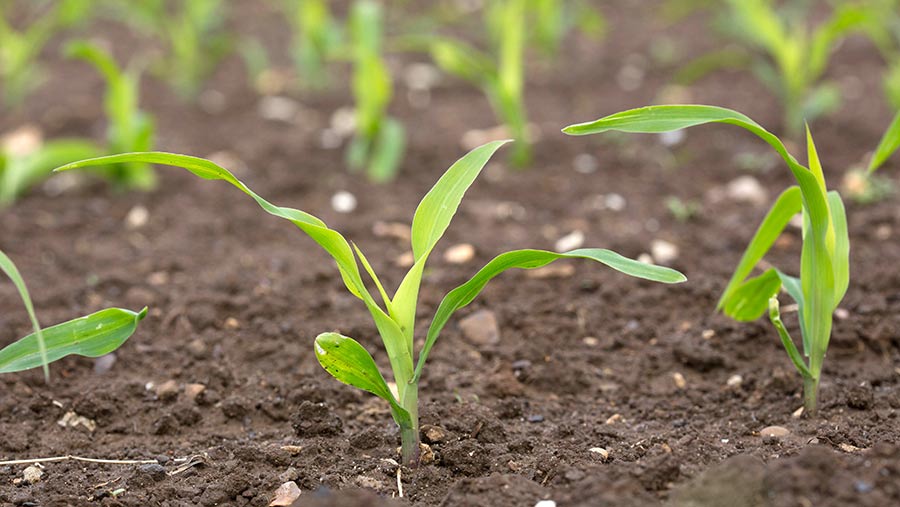 The combination seems to be creating a perfect storm, which, given the right conditions for F graminearum – wet and warm at anthesis – could result in levels of disease, mycotoxin infection and unsaleable grain not seen before.

The mycotoxins produced by F culmorum and F graminearum include deoxynivalenol (DON) and nivalenol (NIV). Both produce zearalenone (ZON) later in a delayed harvest.

Looking ahead, Prof Edwards says it was recently confirmed at the European Commission’s Mycotoxin Forum that the permitted threshold in grains for human consumption looks set to change.

So, with increased fusarium risk and potentially less wriggle room on mycotoxin limits in the future, what should growers consider for countering the threat?

Fera expert Phil Jennings says three key factors influence the occurrence of fusarium and subsequent mycotoxins, including the region where a farm is located, the season and agronomic practices.

The first two factors growers can do little about, but agronomic practices can be tweaked to minimise risk, such as not overloading rotations with maize and re-evaluating tillage practices.

While reduced or no-till is now considered a key component in improving soil health, there may be a trade-off in exposing crops to increased F graminearum risk – something seen in North America where it is a devastating problem for wheat in no-till maize rotations.

“Growers should also be looking to apply appropriate fungicides at the right time during flowering,” Dr Jennings says.

Prof Edwards says another area that can be reviewed is harvest management, with any delays in getting wheat crops cut risking the build-up of DON and ZON, not to mention the loss of quality characteristics such as Hagberg falling numbers and specific weight. 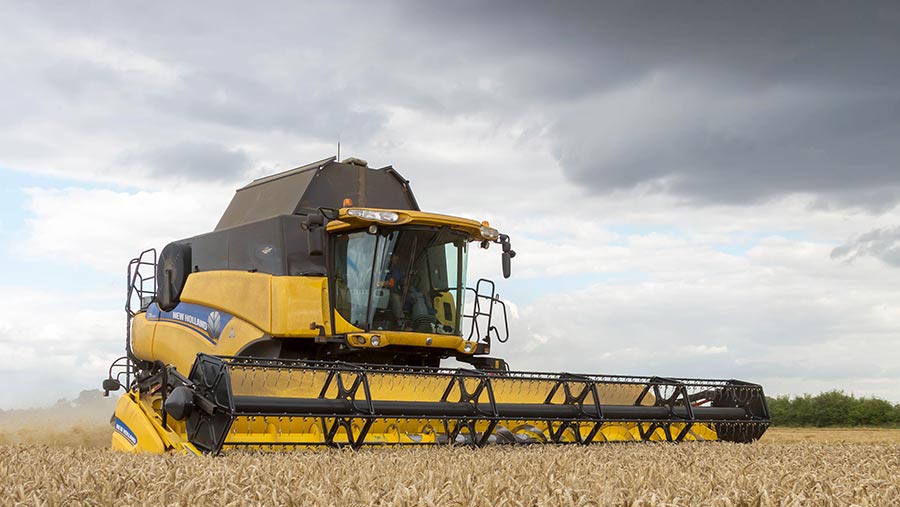 He urges growers to look at combine capacity, with larger and more efficient machines capable of taking advantage of any small windows during a catchy harvest helping to minimise mycotoxin development.

“Also make sure the combine is well maintained and you have a good access to parts and service to minimise any downtime,” he says.

Along with reliable, high-output combining, boosting grain storage and drying capacity will also aid growers in the quest to minimise mycotoxin levels and rejected grain.

“Plan to cut a proportion of the crop even if a few percent need to be knocked off the moisture content with the dryer, and prioritise milling wheats. It is a huge gamble leaving it out in the field,” adds Prof Edwards.

The Europe-wide MyToolbox project is aiming to provide growers with a one-stop shop for decision making and advice to reduce mycotoxin levels in cereal crops.

Harper Adams University’s Simon Edwards has been involved in the project, which has been evaluating models used in several European countries, where farmers enter local data and are provided with a mycotoxin risk assessment.

This can then be used to influence decisions pre- and post-harvest, such as fungicide inputs, harvest scheduling and storage.

Currently, an Italian model is being tested with Dutch data and vice versa to establish accuracy in differing conditions. Data from the UK will also be fed into the two models to establish suitability.

It is hoped that an online tool will be launched in 2020 across Europe, which will include wide ranging information on the control of fusarium ear blight and mycotoxins.

Scientists at Rothamsted Research are investigating the use of automated spore traps to enable more targeted and accurate fungicide applications, working with industry partners on Innovate UK and AHDB-funded projects

Produced by Rickmansworth-based Burkard Manufacturing Co, the spore traps process about 300 litres of air each minute. They can then identify which pathogens are in the “soup” and sends a text message to a website, allowing the farmer or agronomist to be alerted to the disease threat.

While much of the work so far has focused on potato blight, sugar beet diseases and other cereal and oilseed rape threats, Rothamsted’s Jon West says it could also be useful in quantifying fusarium risk as wheat crops reach flowering.

Some initial investigations have been carried out in conjunction with AHDB and ADAS, but only at the low fusarium risk site at Rothamsted, so Prof West would like more funding to broaden his research into hotspots such as the South West and around the Wash.

“This is a new type of precision agriculture. It’s not only about knowing which fungicide to use, but also when to apply it and only when it’s absolutely necessary,” he explains.

3. Better varietal resistance in the pipeline

It is widely accepted that wheat varieties in the UK are more susceptible to ear blight than those in other parts of the world, but that may be about to change as researchers seek novel sources of resistance.

UK breeders haven’t needed to focus on Fusarium resistance, as it hasn’t been a problem until the recent hike in maize area and F graminearum becoming the dominant species.

In response to a growing concern, Paul Nicholson at the John Innes Centre in Norwich is leading a project which aims to address the weakness of UK wheats by introducing resistant traits.

He says there are three options for doing so, with the first bringing in genetic markers for “exotic” resistance traits from China, something that has been done with some success in North American breeding programmes.

The second aspect of the research is looking at wild relatives that can be crossed into elite wheats in the hope that the progeny will inherit an ability to resist Fusarium.

The third is investigating the possibility of knocking out “susceptibility factors”. It is thought that Fusarium fungi disrupt the plant’s signalling pathways for growth and defence, so it can infect without any resistance.

If the “susceptibility” gene can be removed or disabled without interfering with other valuable traits, it could produce much more robust wheats.

“We hope to see a dramatic improvement in varietal resistance within 10 years,” adds Dr Nicholson.

In addition, he points out that AHDB is revising the way it scores resistance to ear blight in Recommended List trials, which will help better tease out subtle differences between current varieties.