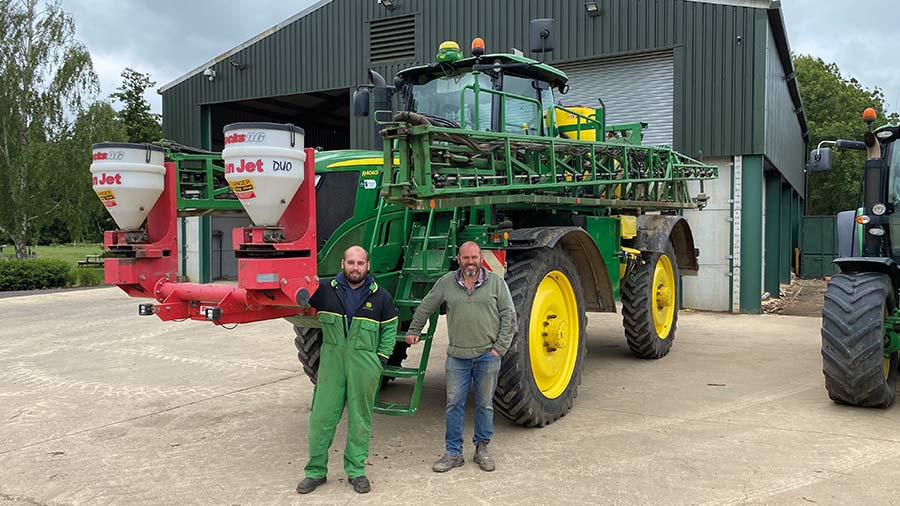 The pair farm 1,400ha across the Norfolk/Cambridgeshire border and spent a total of £170.70/ha on their Skyfall winter wheat, which was entered into the competition, run by independent crop consultant Adas.

These included an Adas expert programme, blockbuster high-input regime and a number of other growers from across the country.

In a growing season that started off with a very cold, dry April, followed by a wet May, septoria disease pressure was initially low, but levels rapidly rose into the season, with disease taking hold in susceptible varieties in June and July.

Andrew Melton deployed a four-spray fungicide approach on his winning wheat crop at Peartree Farm, using 0.5 litre/ha of tebeconazole at T0 to tackle any potential onslaught of yellow rust.

All about Pear Tree Farm

Andrew Melton and his son Sam farm 1,400ha of owned and contract farmed land at Pear Tree Farm, near Wisbech, on the Norfolk/Cambridgeshire border.

The business also includes a soil sampling business for potato growers covering a large area of the country and a contracting operation, extending about 15 miles around the family farm.

They operate minimum tillage and full inversion cultivation systems, and after investing in a zero-tillage drill, the pair are now using cover crops to improve soil health and are aiming to reduce tillage further.

Their overall business ambitions are to reduce cost of production and emissions without affecting profitability or yield, using benchmarking as a key method to reduce their fixed costs and reliance on inputs.

“We closely monitor the weather throughout the winter and spring and tweak programmes accordingly.

“It’s not necessarily the weather at the time of the T1 that you are applying for, it’s what weather may arrive in the next three or four weeks, which you are protecting leaf 3 from,” Mr Melton says.

He now plans to use an on-farm weather station to model potential disease threats using two years’ worth of septoria and yellow rust infection data to help cut back on rates where appropriate.

As there’s always an element of guesswork when it comes to forecasting the weather, Mr Melton views fungicides as an assurance programme to avoid potential yield loss and says a grower’s fungicide strategy “is often dependent on attitude to risk”.

Although there was not vast amounts of septoria present at T2, Mr Melton opted for the new generation Revystar (mefentrifluconazole + fluxapyroxad) at 1 litre/ha + 1 litre/ha Arizona (folpet) due to Skyfall’s greater disease susceptibility than other varieties grown on farm, such as Extase.

Skyfall has a yellow rust rating of 3 and a septoria rating of 5.3, which is on a scale from 1 to 9, where 1 is low and 9 is high for disease resistance.

Folpet was added to the mix at 1 litre/ha as a replacement option to chlorothalonil, which was the farm’s previous mainstay multisite fungicide, before finally topping up with 0.7 litre/ha of Prosaro (prothioconazole + tebuconazole) at T3.

“The extra spend was worth it as septoria came in later. But it all depends on the variety, weather and level of disease and managing this accordingly. We wouldn’t include a high spend of fungicides in lower-risk programmes,” he says.

He applies a high-risk, high-input and low-risk, low-input approach to his cultivar choices of Firefly, Zyatt, Skyfall, Saki, Parkin and Extase. On average, he deploys:

April was extremely dry, with several areas of the UK receiving less than 20% of the long-term average for rainfall. May, however, was a different story with heavy rain, and some regions receiving more than 200% of the average rainfall amount.

“Disease development was generally quite slow. Wheat crops were fairly clean of disease at T1 and approaching T2 appeared clean, but many were infected as a result of the high rainfall levels in May.

“By late June and into July, we started to see some high levels of septoria – particularly in susceptible varieties,” says Miss Morgan.

With this in mind, she notes there was opportunity to cut back on fungicide spend early on in the season and highlights the importance of tweaking programmes, especially when using resistant varieties.

She also recommends the inclusion of a multisite active to help reduce risks of resistance build-up.