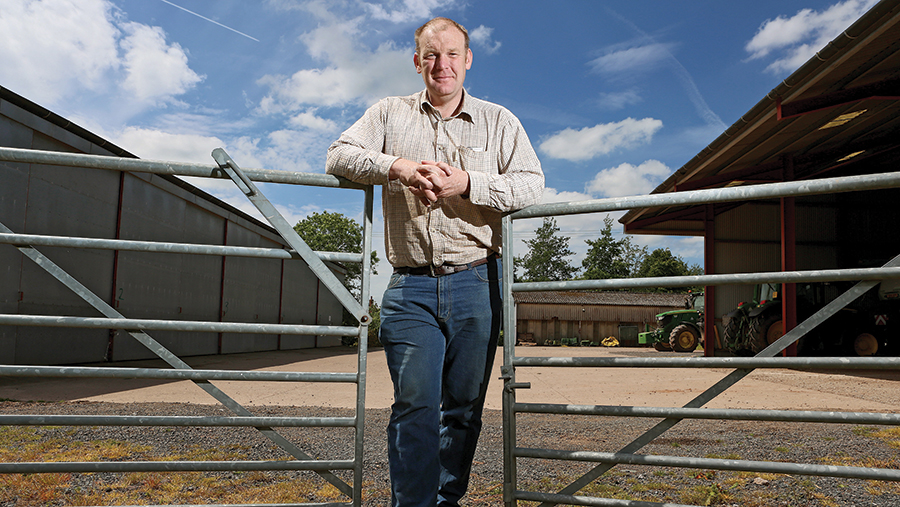 A Herefordshire grower achieved the best financial return in a competition from a crop of winter wheat by spending £105.60/ha on his fungicide programme.

Mr Wood chose to target his spend at T1 and T2, and added a T3 spray to protect the yield after conditions turned showery later in the season.

Mr Wood decided to take part to challenge himself to cut back his fungicide use as far as possible and try to rely more on drilling date and variety choice.

His wheat goes to either a local chicken or ruminant mill as there is a huge demand locally for feed wheat, meaning he has free rein on his variety choice.

He picks varieties which produce a decent yield, while also having good resistance to septoria and good standing power.

Mr Wood’s attitude is to take a targeted approach to his fungicides, matching his spend to the disease pressure each year.

The Graham variety was grown in the YEN trial due to its popularity locally, with a fully replicated trial set up on each of the seven participating growers’ farms.

Each grower chose their own programmes, while Adas chose the timings for and carried out all drilling, spraying and harvesting.

Mr Wood usually drills on 10 September and uses Deter (prothioconazole + clothianidin) for barley yellow dwarf virus control, although he pushed back drilling until 20 September last autumn, this being the first season when growers could not use the neonicotinoid seed dressing.

He chose not to use a T0 spray in the challenge, as Adas drilled slightly later than he would have done, meaning the disease pressure was likely to be lower, and conditions were reasonably dry.

“If you have rust then you have to treat it, but the economic benefit for T0 otherwise is at best dubious,” he says.

“Only if I couldn’t hit my T1 timing would I use a T0 as an insurance policy.”

Mr Wood used to put chlorothalonil on as the sprayer was going through anyway, but sprayer capacity is a factor in his fungicide choices.

For T1 he had originally planned to use a strobilurin + azole + chlorothalonil mix, but the application was delayed for 10 days until 30 April.

As it was delayed, Mr Wood decided to beef up his T1 by switching to 1 litre/ha of SDHI/azole mix Aviator (bixafen + prothioconazole) and 1 litre/ha of chlorothalonil.

“There were a few showers around in May so there was an increase in disease pressure, but nothing silly.

“I know we are told not to mix Aviator and chlorothalonil, but they were fine.”

Mr Wood also chose to go in with a T3 ear spray as the conditions changed, but four of the competitors chose to omit a T3 spray.

“In mid-June it started to become more showery, and fusarium was becoming more of an issue,” he says.

Normally Mr Wood applies prothioconazole for fusarium, but in the challenge he decided to use Prosaro (prothioconazole + tebuconazole) to act against the two different types of fusarium.

“This added a bit to our fungicide spend, but I was prepared for that,” he says.

The Adas experts entered two fungicide strategies into the challenge; the Adas blockbuster strategy which saw the highest spend of the competition at £238.82, and the Adas expert approach, which was tailored to the season.

Meanwhile, while the Adas experts spent £100/ha less on their tailored fungicide programme than the blockbuster approach, they produced the best margin, more than £70/ha higher.

“The Adas expert strategy was decided through discussions between four of us on the team at Adas and was based on the last three or four years of trial work,” says research scientist Philip Bounds.

“Our approach used multisites quite heavily, and mixed multisites. Mark’s programme was a lot kinder on the sprayer operator as it didn’t have four-way mixes.”

The practicalities of application were a big driving force behind his choices, Mr Wood says.

“I’ve always got in the back of my mind about the actual spraying, and I think being a bit more efficient and spraying at the right time means there is less chance for things to go wrong,” he adds.

Mr Wood says that other strategies used in the challenge show that growers could push themselves harder to cut their fungicide spend on a low disease year, but thinks there is a risk growers could cut back too much.

“We need a little bit of insurance, we could be braver, but we could also get a kicking, it’s about making an educated guess,” he says.

Rather than looking specifically to cut his inputs on the back of the challenge, Mr Wood instead plans to try to target his approach and match the conditions even better.

“It’s not about cutting things right down, it’s about using the appropriate products at appropriate rates.”

In hindsight, he admits changing from his original plan to use a strobilurin to using Aviator at T1 might not have been necessary after looking at the other strategies in the challenge.

“If we haven’t got a massive amount of disease, why put on an SDHI? I haven’t got a problem not using an SDHI if there is no disease there,” he says.

Mark Wood managed to plant 80% of his winter wheat area this autumn, drilling Graham and Extase.

T2 is the most important spray in his programme, and where he aims to use better products, but is unsure if the cost of Revystar (fluxapyroxad + mefentrifluconazole) will justify using it.

“If I want something which will control the disease I will pay more,” he says.

He plans not to use a T0 this season, and will probably use up some chlorothalonil at T1.

“Again I don’t see us using Revystar at T1 unless the disease pressure is exceptional.”

Mr Wood will either use something cheap and cheerful at the T3 timing, or cut it out completely, especially if any of his crops lack rooting.