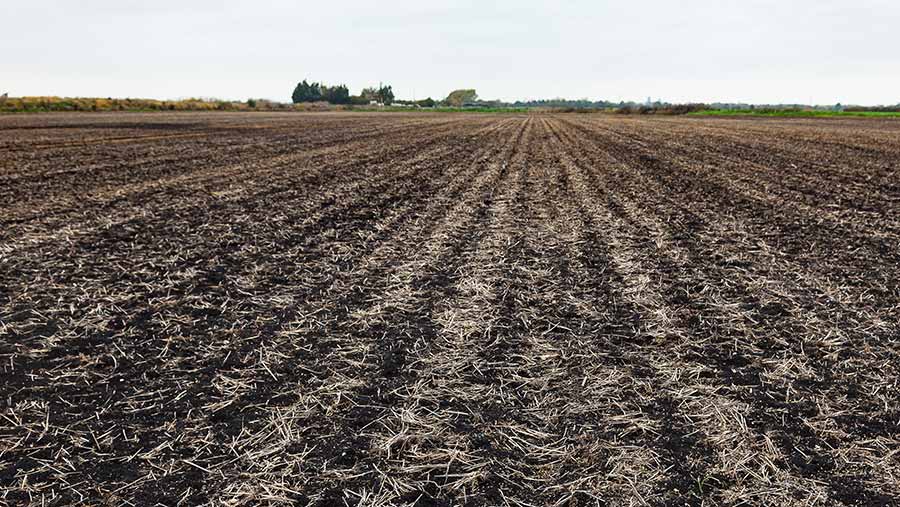 Sussex grower Mark Chandler will leave his entire winter wheat area fallow on his contracted land this year to preserve the rotation.

Switching to spring barley to salvage a crop after the wet autumn and winter would mean growing two break-even crops in a row.

Therefore, he has decided to take the financial hit this year and plant a cover crop instead on up to 75% of his acreage, depending on the farm.

Meanwhile, on his own tenanted land at Moor Farm, near Petworth, he will focus on growing spring barley on his best soils while trying to cut his overheads to minimise the financial impact of the poor season.

As of the middle of February, Mr Chandler had managed to drill just 40ha of Skyfall winter wheat after oilseed rape on one of his stubble-to-stubble contract farms, leaving 1,245ha uncropped.

The current forecast means winter wheat is now no longer an option, but with predominantly silty clay loam soils which slump quite badly, swapping to spring cropping would allow Mr Chandler only to break even.

He has therefore tried to get a handle on the true cost of doing nothing, before deciding on his cropping strategy.

While he says it is difficult to truly quantify, he has two full-time members of staff, his kit is still depreciating and he has costs such as insurance.

Growing a lot of spring crop would tie up his two staff members and mean he would have to fill his current vacancy for a third, and get in two students to help with harvest.

Not doing so means he could stick with two for the season and contract them out to help with silaging, to help cover his labour bills, and employ only one student at harvest.

Having decided when the UK voted to leave the EU to take all of his machinery off finance, he does not have hire-purchase costs, and not planting a crop would also see a saving on fuel, servicing and repair bills.

If a lot of spring crop was grown, while input costs would be less, hours would be put on the clock and depreciation would have to be factored in.

He would also have to apply P and K, remove organic matter and travel over the soil, while placing half the farm in spring barley would also see a bottle-neck at harvest.

Mr Chandler normally contract-hires a combine for 200ha alongside his own at harvest, and growing a large acreage of spring barley would mean this extra combine would still be needed.

At a yield of 5.9t/ha Mr Chandler can break even, with straw likely to provide a profit of about £100/ha.

But with the cost of hiring an extra combine also at £100/ha, this would wipe out the value of the straw.

“What I don’t want to do is be sat here in August and all we have done is just covered our costs,” he says.

His five-year average for spring barley is 5.9t/ha, but with the wet weather unlikely to allow drilling until early April, a drought later in the season on the silty loam soils is a big worry.

“Against the margins of spring crops we will be pretty much break-even, so it’s debatable if its worth doing,” he says.

Swapping to spring barley now will not only mean a break-even crop this year, but also next, as to preserve his rotation the crop will have to be followed by beans, tying him in to two years of poor returns.

Therefore, he has decided to take the radical decision to leave all the winter wheat land on his contracted farms fallow this year so that he can take an 18-month approach.

Rather than rushing in to drill this year, he will plant a summer cover crop and hope that the early entry it will allow for winter wheat drilling in the autumn will help cover the additional costs of drilling and the cover seed.

Mr Chandler will cultivate the top inch with carrier croissant discs to stimulate any blackgrass, which he will then spray off before drilling the cover.

This will be desiccated before it goes to seed and should allow winter wheat drilling to take place a week earlier than normal – it is usually delayed for blackgrass control.

On the really bad blackgrass land he may choose to not drill a cover but to properly deal with the seed bank in the soil.

“We will have to account for the cost of the cover at harvest 2021, but its still a better option, and pulling drilling forward by a week could potentially make a huge difference,” he says.

“We are better off being honest about what we can feasibly achieve this year, as it saves our reputation.

“The owners will not have any bills, but we also won’t get paid at all,” he says.

While he says this approach is the best option for this season, it is not sustainable in the long term.

On his own tenanted land Mr Chandler has decided the most profitable option is to crop only his best soils with spring barley, as this can yield up to 7.4t/ha in the right conditions.

Mr Chandler grows spring barley for blackgrass control, with a block of land put into winter cover in readiness for the crop this spring.

But rather than drill it there, he will instead plant spring barley on the best of the land originally intended for wheat.

He will then leave the cover as long as possible, apply some sludge and look to drill his oilseed rape as early as possible.

“If we are going to risk growing oilseed rape then this gives us the opportunity to get the most out of it,” he says.

However, he is still on the fence about OSR, as it must first stop raining and he has not bought any spring seed, and at about £500/t for spring beans and spring barley much the same, is not able to.

Instead he will be using his home-saved seed, although the germination has been tested as low so he will have to increase his seed rate.

“You can’t really grow it on the cheap,” he says. ”You’ve got to grow it well and that starts with putting it in the ground.

“Muddling it in doesn’t work, so if conditions aren’t right, we won’t plant.”

Mr Chandler would normally go straight in with his Horsch Sprinter drill, but as the silt has run together it will need to be lifted.

He will also need to work the seed-bed to get a chit of blackgrass, which will have to be left for an additional two weeks after the ground is fit to travel, meaning his is unlikely to drill before the first week in April.

Mr Chandler also points to the effect his cropping strategy will have on morale on the farm.

“There’s the demotivation on staff – and yourself – from not cropping, and not having the joy of having grown a good crop.

“The decision not to crop is much harder than it would be to do it.”