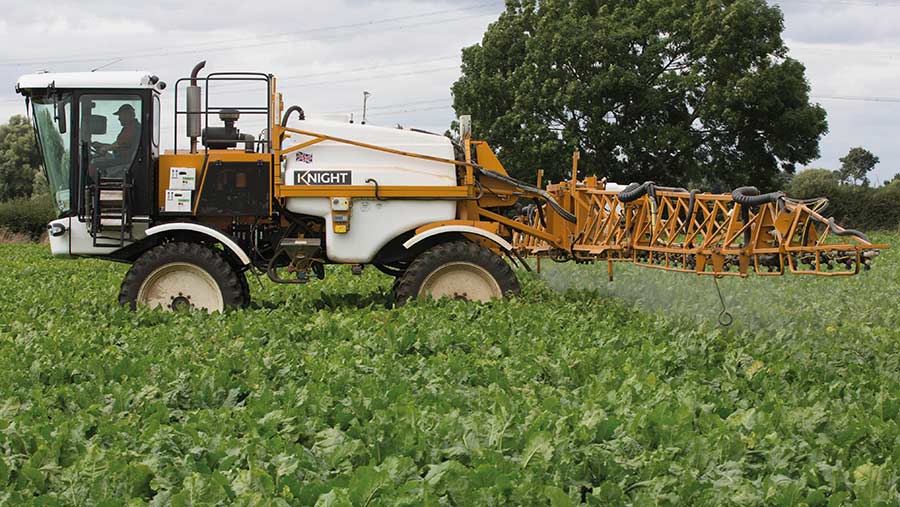 A new early warning system for cercospora is being used by the British Beet Research Organisation (BBRO) following last season’s outbreak, which exacerbated the impact of virus yellows on sugar beet yields.

The model, developed in the US and road tested in Spain, predicts when conditions are conducive to rapid development of cercospora based on temperature and humidity, by calculating a daily infection value. When the sum of the preceding two days’ daily infection values is seven or more, risk is high.

“It is a disease driven by high temperatures and particularly humidity, so moisture within the canopy – a bit like potato blight,” explains Simon Bowen, head of knowledge exchange at BBRO.

“We had a period in August last year where we had a lot of rain, and temperatures stayed very high – over 20C at night. Once we start getting into periods of over 15 hours of those type of temperatures and above 90% relative humidity, that starts ringing alarm bells.”

Areas around the Wash and south of Cambridge and Peterborough were particularly badly affected last season, he says.

“One of our learnings was that any crop with big infections of virus yellows seemed to be more susceptible,” Dr Bowen says. “Logic suggests any plant that has had its plant health compromised, for example by a virus, will be more susceptible to disease.”

He highlights that in the BBRO Beet Yield Competition, it was found that crops which had more than 30% virus yellows were the ones hit hardest by cercospora.

The model will be supplemented by Weatherquest forecasting data to help give advanced warning of potential high-risk conditions, while Sencrop weather stations, located in 40 crops across the beet growing area and fitted with leaf sensors to measure humidity in the canopy, will provide additional information.

Dr Bowen says: “Every Tuesday from the last week of June we will put out a bulletin of the risk of cercospora, and on Thursday we will run a text alert system of where there is high risk based on postcodes.

“That warning won’t be to go out and spray, but telling you that your crop is a high risk of symptoms developing, so go and check. We only want to use a fungicide if the symptoms are there.”

But for the most effective control, it is critical to spray as soon as you see symptoms, says Mark Stevens, head of science at BBRO. “The problem we have is the chemistry currently is either an azole or azole + strobilurin mix, and we can’t get away from the fact there is cercospora resistance to both of those groups.” 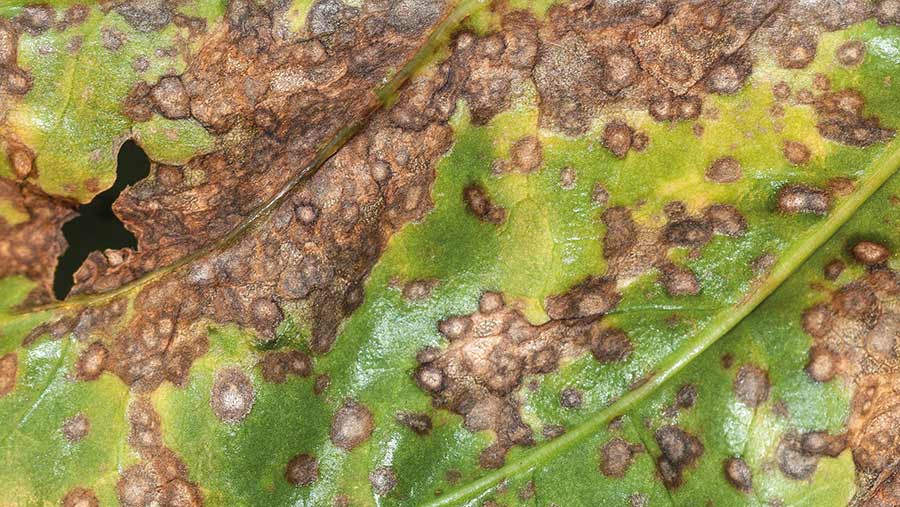 That’s why there is a need for SDHI chemistry – and there is some good new chemistry coming along those lines, although Prof Stevens says it is touch and go whether growers will have it for this season.

“But to give some confidence, we used Escolta (cyproconazole + trifloxystrobin) at Bracebridge last year where there was quite high levels of cercospora, and it was a comparison trial with new chemistry, and two applications of Escolta, 21 days apart, was one of the best treatments.

“Put it on when you first start to see symptoms and keep intervals tight.”

The challenge is managing cercospora alongside the usual disease threats of mildew and rust. “You still have to manage your crop,” says Prof Stevens. “Whatever comes first, you have to spray. Mildew and rust are likely to remain the key drivers, but unfortunately cercospora has made it more complicated.”

An additional factor to consider is that resistance guidelines restrict the use of strobilurin-containing fungicides in sugar beet to no more than 50% of the programme, while alternative non-strobilurin products are restricted to flutriafol and sulphur, until an SDHI-containing product is approved.

Prof Stevens says: “In an ideal world, going forward, you will probably want to use a strobilurin mix first, and then potentially put a SDHI product in the middle slot as I still think weather patterns for cercospora development here are usually in that August window, and if you’re thinking of a third spray in September, go again with a SDHI if cercospora pressure is high, or switch back to a strobilurin/azole.”

Varietal resistance is also likely to play a part in future. “The mainland European countries have varieties with those traits, we just need to get it into UK varieties,” he says.

There does already appear to be some differences in UK varieties, Dr Bowen adds. Information from unreplicated BBRO variety strip trials suggested Evalotta, Conger and Vixen were among the more susceptible. “If you’re growing those varieties this season, you need to watch very carefully.”

While aphid pressure has built, particularly in Suffolk and Essex during the first half of June, according to BBRO monitoring, the outlook for virus yellows levels in sugar beet is much better than in the 2020 season.

BBRO’s head of science Mark Stevens believes 2021 will be a classic situation – low levels of virus in small patches, “but it won’t be the issue it was for many last year, which is good news”.

The early period is critical, as reflected by the spray threshold which is one green wingless aphid per four plants, then after 12 true leaves, it’s one per plant. After 16 true leaves, it is uneconomic to spray.

However, Dr Bowen warns that the crop doesn’t suddenly go resistant to virus at 12 true leaves. “It’s not a switch. On a plant with 12 true leaves, aphids are likely to produce half as many young as they would be on a younger plant, which is good as they won’t spread so much.

“But if you are still finding aphids at the 12 true leaves threshold you might want to consider spraying as you’re not totally out of the woods,” he says.

“There might be the odd crop with greater levels of virus, and these will need investigating whether they have been triggered by local spoilage heaps with root remnants that might have virus on from last year, which the aphids have picked up.”

Growers should continually challenge themselves about crop hygiene, he stresses.

“Anything that has been left, particularly when up to 100% of your crop is going yellow, is technically a source. It’s not just for virus yellow but also cercospora, which can survive down to -40C. It’s a bit like blight dumps in potatoes.”