Researchers investigating tools that predict when and where aphids arrive in fields believe greater accuracy is possible and could play a role in helping farmers to reduce insecticide use.

The team from the Game and Wildlife Conservation Trust, with the help of agronomy group Agrii, has been looking at the potential for sticky traps to be used to monitor aphid numbers as they start to invade fields, so farmers can identify the most vulnerable crop areas and target sprays accordingly.

This year – the first without neonicotinoid seed treatments – the only alternative method of controlling virus-transmitting aphids in autumn-sown crops is by spraying with pyrethroids.

This is something most growers and agronomists prefer not to do, to protect beneficial insects and to reduce the risk of further increasing aphid resistance to pyrethroids.

Of the two aphid vectors of barley yellow dwarf virus, there is resistance in the grain aphid to pyrethroids, but not in the bird-cherry oat aphid.

Professor Holland reports that grain aphid was the predominant species in studies conducted in the south and east of England, as well as the Midlands. Bird-cherry oat aphids were more prevalent in the South West.

BYDV alert tools already exist and can be very useful, explains John Holland, head of farmland ecology at the Game and Wildlife Conservation Trust, but he stresses that they highlight when a foliar spray should be applied, rather than if it is needed.

“These systems are triggered when aphids start arriving and work by calculating the number of day degrees required until secondary spread can occur and the virus gets distributed across the field,” says Professor Holland.

“They use local weather data, but assume that aphids are going to arrive. Information on when aphids are active in a region can be obtained from the aphid alert system run by the AHDB, which uses the regional suction trap network,” he adds.

While both are helpful, a farm-based system could achieve better timing and greater reductions in insecticide use. 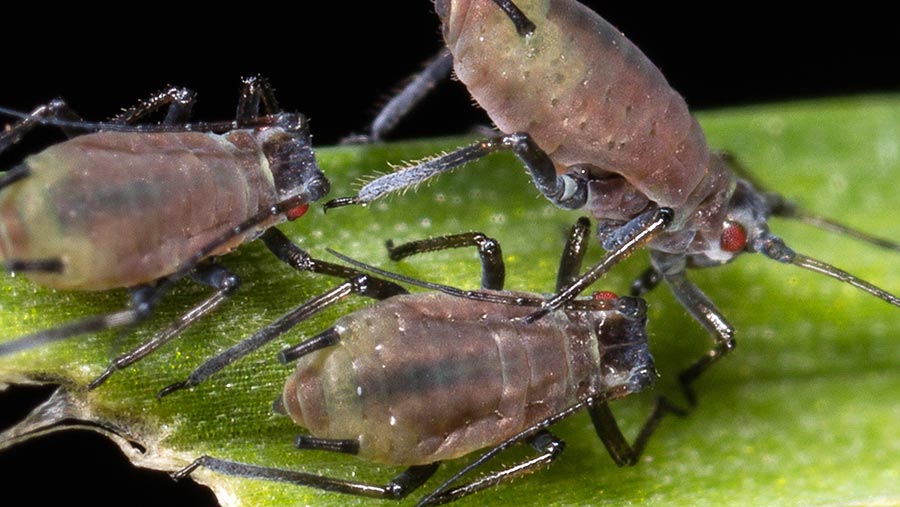 “We know from previous work that there is an enormous amount of variation in aphid migration on a local scale and that differences between field sites occur,” Prof Holland says.

He adds that there is also insufficient knowledge on any relationship between the number of aphids arriving and the level of crop damage seen – so having a spray threshold that can be used in conjunction with a decision support system might be better.

“The level of virus being carried by aphids is believed to be low. There are exceptions to this, but it’s prohibitively expensive for farmers to get aphids tested for virus, so the default position is to assume an infection level,” he adds.

Prof Holland’s work, which was funded by the AHDB, shows that sticky traps placed in crops were effective, capturing the pest as it invaded.

Aphid numbers were much higher in traps in the headland areas of the field, dropping off sharply towards the centre.

“Overall, three-and-a-half times more aphids were caught on traps that were 5m from the field edge compared with 70m. When we looked at this in more detail, most of the aphids caught were located around the edges or in areas closest to the prevailing wind,” he adds.

That was to be expected, as aphids are weak flyers and get carried on the air currents that flow over boundary features and then dip down.

“Straight away there are possibilities of only spraying certain areas, although the practicalities of local environment risk assessment for pesticides and spray drift do have to be considered,” Prof Holland says.

More aphids will be found in fields that face south-west or south-east.

The researchers also found huge variation in the numbers of aphids invading each field, even on the same farm. Monitoring allowed them to identify fields where there were no aphids captured over the entire autumn period, as well as those that had high numbers.

“We trialled the sticky trap approach with a few farmers, placing them in four to five of their fields by GS12. It showed them how variable aphid levels are and allowed three of them to reduce their insecticide use,” he says.

If it is to be adopted, sticky trap use needs to be accompanied with an aphid identification guide. “To the untrained eye, aphids are easily missed or misidentified. Counting aphids in the field is difficult to do, so some training may be required,” he explains.