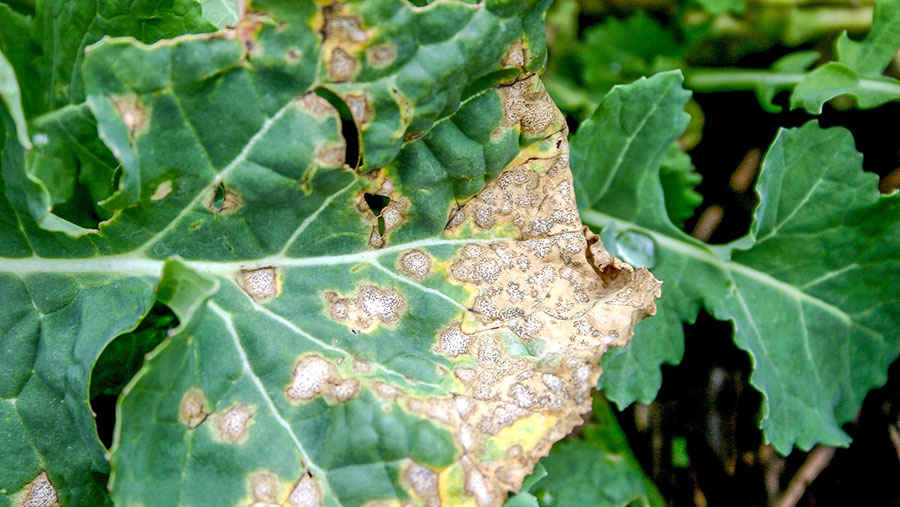 Phoma stem canker is a highly damaging disease in oilseed rape, with Fera Science’s CropMonitor estimating losses at £100m each season in the UK.

Early-season epidemics are capable of decimating crops – typically putting 0.5t/ha at risk. So what do growers need to know about it?

The disease is a combination of two related pathogens, Leptosphaeria maculans and L biglobosa, which have different effects on oilseed rape.

A monocyclic pathogen, phoma stem canker is a disease that comes from the debris and stubble of the previous year’s crop.

Infection occurs as spores infect the leaves of new oilseed rape plants, growing along the petiole towards the stem.

However, the only visible signs are the leaf spots. Small and pale leaf lesions will appear 10-20 days after infection, with black dots in their centre, and tend to appear on the older leaves.

Symptoms usually first appear on earlier-sown crops – depending on how much rain falls in August and September – but most incidences will occur by the end of September, into early October.

That said, it can take the pathogen longer to travel from the leaf into the stem in better-grown crops – so, in some instances, later-drilled, smaller crops are more at risk.

In addition, growers need to be on alert, as late epidemics can occur in February and March and are still capable of causing extensive damage, especially to small crops.

“Phoma is a greater issue when it’s warmer, and there is a bigger problem in the south and west of England than in the North. In the North, sometimes the infected leaves can fall off before the fungus reaches the stem,” says Dr Ritchie.

The pathogen will spread without further symptoms to the stem and will incubate until early spring, when visible phoma stem canker will set in.

Once it has reached the stem, the disease kills plant cell tissue, leading to stem cankers, reducing yield by restricting water and nutrient transport. In severe cases it can kill the plant. 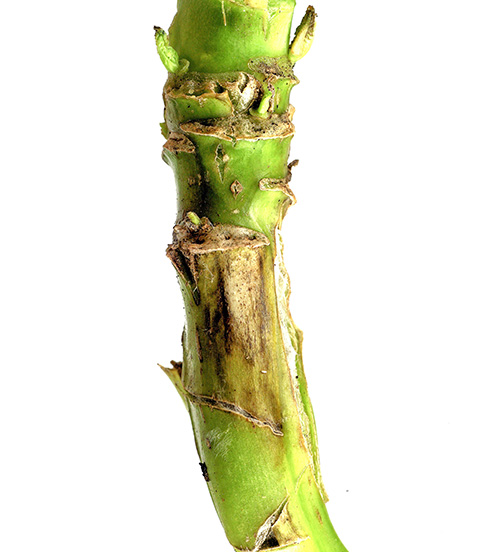 Crop residue is the key risk factor for phoma. “The proximity to stubbles of previous crops that have not been ploughed in are the biggest risk factor, as spores can travel several hundred metres,” explains Dr Ritchie.

Work carried out in the 1980s shows infection is highest when crops are within 40m of a previous crop and debris has been left unploughed.

The level of infection is roughly halved when an unploughed field of stubbles is 400m away.

Warm and wet weather, and cycles from wet to dry to wet on oilseed rape debris encourage the development of the pathogen.

Colder temperatures can slow the pathogen, but do not stop it altogether.

Crop growth stage also has an effect, with small plants likely to be hit hardest, as the pathogen grows quickly from the leaf to the stem.

Another risk factor is the susceptibility of different varieties. “Resistance on the AHDB Recommended List ranges from four to nine – anything with a four tends to be more susceptible,” says Dr Ritchie.

Within varieties, there are two types of resistance: single (R-gene) and multiple (quantitative) resistance.

R-gene resistance is active within the leaf of the plant, but rapidly changing phoma populations can reduce its effectiveness. However, quantitative genes act within the petioles and stems.

According to AHDB research, plants with both R-gene and quantitative resistance are likely to be the most effective.

However, although the Recommended List ratings are updated annually, they do not include phoma leaf spotting data or distinguish between species of the pathogen.

Growers should therefore choose varieties with a rating of five and above where phoma leaf spot is a management target.

Phoma can be controlled through fungicide sprays, but timing is an important element of success. The AHDB recommends monitoring crops for phoma leaf spots by looking on the underside of leaves.

If white tufts are present, the symptoms indicate downy mildew and not phoma.

Varieties with resistance levels below seven, or backwards crops, should be treated first, once 10-20% of the plants have leaf spot.

“This would cover you for most of an epidemic, and can give four to eight weeks protection, depending on the weather – but do monitor the crop, as you may need to spray again,” says Dr Ritchie.

“Some years, infection might not appear until October, so it’s unlikely you will need another fungicide – but it will come down to the size of your crop,” she adds.

Second treatments should only be applied when reinfection is observed – typically four to 10 weeks after the first treatment.

Varieties with good resistance may only require one fungicide application, and growers should only treat varieties with high resistance ratings of eight or nine if more than 20% of the plants have leaf spot.

Though each chemical product will have a recommended rate on the label, AHDB research has demonstrated that good control can be achieved with two sprays at 50% of the recommended label rate.

That is unless plants are particularly small, or lots of plants are affected – then only 75% of the recommended dose is needed.

Azole fungicides offer protection when applied before infection. However, product choice will be influenced by requirements for curative activity when small plants are infected.

The plant growth regulatory effects of some actives should also be taken into account where plants are small.

Growers should also consider the likely fungicide applications for other diseases, such as light leaf spot and sclerotinia, she adds.

Phoma is very weather dependent and infection therefore varies from year to year, but there is a forecast growers can use that gives an indication of risk level.

The AHDB’s phoma forecast uses temperature and rainfall information from 1 July to 26 September to simulate the development of the L maculans pathogen.

The forecast predicts the date when 10% of oilseed rape plants could potentially show symptoms of phoma leaf spot. But this does not account for localised rainfall. This indicates the treatment threshold for varieties with lower disease ratings for stem canker.